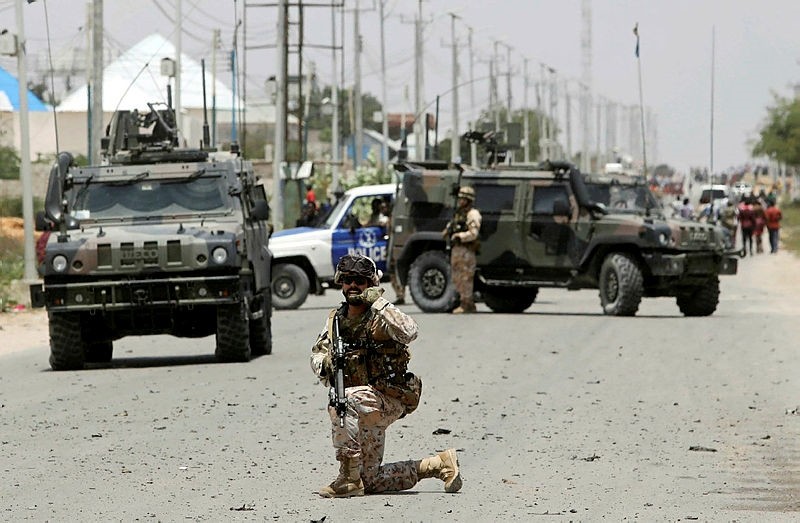 A soldier holds position as the damage is assessed after Islamist group al Shabaab hit a European Union armoured convoy in Mogadishu, Somalia October 1, 2018. (Reuters)
by reuters
Oct 01, 2018 12:00 am

An al-Shabaab suicide bomber on Monday targeted an Italian vehicle in a European convoy, killing at least three people.

The blast struck the convoy around 12:10 p.m. local time on Industrial Road, a major thoroughfare in the heart of the city.

Police said the bomber had also died in the blast.

A Reuters witness saw men towing their damaged vehicle after the explosion hit its rear end. The armored vehicles had Italian and EU flags on them.

The al-Shabaab terrorist group, which frequently carries out attacks in the Horn of Africa country, claimed responsibility.

The Italian military said a convoy of five vehicles returning from a training activity had been attacked but that no one was wounded or killed.

"The vehicle, with four soldiers on board, was slightly damaged and able to return to the base," it said.

The European Union is one of the major sources of funding for the African Union-mandated peace-keeping force AMISOM which helps defend Somalia's central government against militants.

Somalia has been engulfed by violence and lawlessness since the early 1990s after the toppling of dictator Mohamed Siad Barre.