First commercial flight from Ethiopia in 40 years lands in Somalia 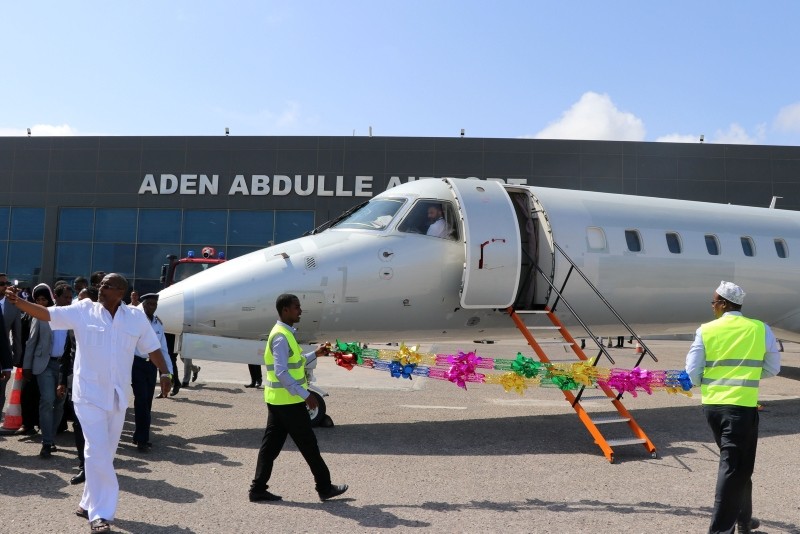 An airplane chartered by Ethiopiau2019s National Airways sits on the tarmac at Aden Abdulle international airport in Mogadishu, on October 13, 2018, after a first commercial flight in 41 years between Addis Ababa and the Somalian capital. (AFP Photo)
by Oct 13, 2018 12:00 am

An Ethiopian airline on Saturday made the first commercial flight between Addis Ababa and Mogadishu in 41 years, in yet another sign of warming ties between neighboring Horn of Africa nations Ethiopia and Somalia.

"It's a historical day for us as we launch this direct flight between Addis Ababa and Mogadishu. It has never been easy, we have been trying so many times, but finally we succeeded and this day finally came," said airline owner Abera Lemi at a ceremony in the capital.

Ethiopian Airlines in July launched the first flights between Addis Ababa and Eritrea in two decades in a whirlwind peace process between the two nations after a bloody conflict and extended cold war.

The peace process led by Ethiopia's reformist young Prime Minister Abiy Ahmed, has been followed by a flurry of diplomacy in the region that has also seen Somalia mend ties with Eritrea and a move to end tensions between Djibouti and Eritrea.

In June Abiy paid a visit to Mogadishu where he and Somali President Mohamed Abdullahi Mohamed agreed to strengthen relations.

Somalia and Ethiopia have gone to war several times over disputed territory.

In 2006, Ethiopia sent troops into Somalia to crush the "Islamic Courts Union" (ICU) which had seized large parts of the country including Mogadishu.

Counterterrorism experts say this invasion fueled a full-fledged insurgency by the ICU's radical faction al-Shabaab, which later allied with al-Qaida and continues to stage deadly attacks.

Ethiopia supports the transitional government and has troops in Somalia now forming part of an African Union mission to combat al-Shabaab.