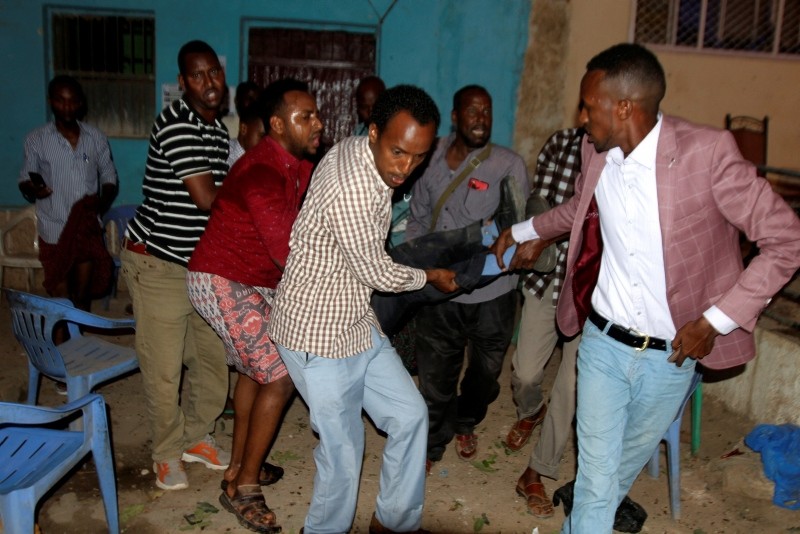 People carry a wounded man after a suspected suicide bombing in Baidoa, some 250km northwest of the capital Mogadishu, southern Somalia, 13 October 2018. (EPA Photo)
by Compiled from Wire Services
Oct 13, 2018 12:00 am

"The first blast was targeting a restaurant near the main city roundabout where the information we are getting indicates a suicide bomber detonated himself, seven people were killed and more than ten others wounded," said Muktar Adan, a police official in the provincial capital of Baidoa where the blasts took place.

"The second blast presumably carried out by another suicide bomber wearing explosives targeted a coffee shop along densely populated street, we don't have the casualty numbers, but we assume several were killed in the second blast as well," he said by phone.

The death toll may rise, Col. Ahmed Muse told The Associated Press. Most of the casualties were caused by the bomber who walked into the restaurant with explosives strapped around his waist, officials said.

At least 10 of the wounded were being treated at Baidoa's main hospital. Most had horrific injuries, nurse Mohamed Isaq told the AP.

Baidoa is a key economic center about 250 kilometers (155 miles) west of the capital, Mogadishu, and about the same distance east of the Ethiopian border.

Witnesses said blasts occurred within a few minutes from each other.

"It looks that these attacks were organized in a way to inflict many civilian casualties because of the targets the bombers have selected," said witness Abdifatah Mohamed

The blasts came a day before the first anniversary of a truck bombing that left more than 500 dead in Mogadishu, the worst ever attack in Somalia which was blamed on terror group al-Shabaab.

Shabaab, an al-Qaida affiliate, is fighting to overthrow the internationally backed Somali government in Mogadishu.

The Shabaab were forced out of the capital by African Union troops in 2011 but still control parts of the countryside and carry out attacks against government, military and civilian targets seemingly at will in Mogadishu and regional towns.