Ebola outbreak in Africa not a global emergency but getting worse, WHO says 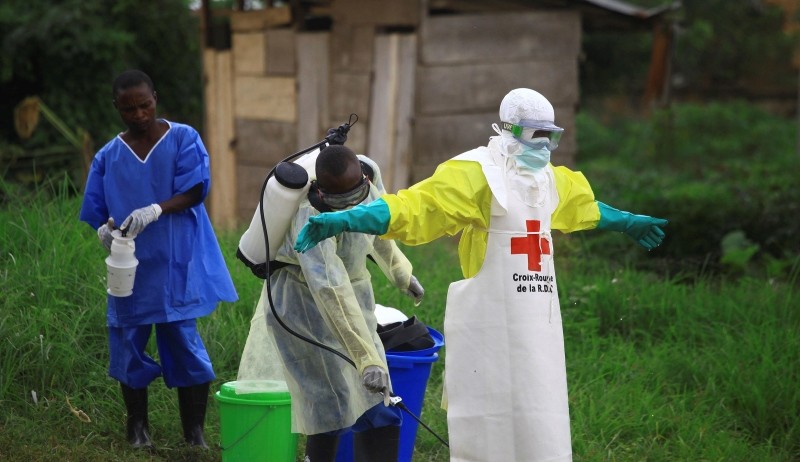 In this Sunday, Sept 9, 2018 file photo, a health worker sprays disinfectant on his colleague after working at an Ebola treatment centre in Beni, Eastern Congo. (AP Photo)
by Associated Press
Oct 17, 2018 12:00 am
The World Health Organization says it is "deeply concerned" by the ongoing Ebola outbreak in Congo but the situation does not yet warrant being declared a global emergency.

After convening an expert group to assess the epidemic on Wednesday, the U.N. health agency said "response activities need to be intensified and ongoing vigilance is critical."

Aid organizations have expressed alarm as the rate of new Ebola cases more than doubled this month and resistance to efforts to stop the virus has turned violent. WHO has warned the risk of Ebola spreading in the region is "very high" as confirmed cases were reported close to the Ugandan border. It says the risk of international spread is low.

Congo says there have been 181 confirmed cases, including 104 deaths.

To warrant being declared a global emergency, an outbreak must be "an extraordinary event" that might cross borders, requiring a coordinated response. WHO has previously made such pronouncements for epidemics including Zika in the Americas in 2016, Ebola in West Africa in 2014 and the swine flu pandemic in 2009.

Robert Steffen, chair of the WHO's emergency committee, said that since there is already high awareness of the epidemic's dangers and an extensive response in Congo, there was "no added value" to declaring a global emergency.

Last week, Congo's health minister said the majority of cases were not previously identified contacts of other Ebola patients, meaning officials aren't able to easily track where the virus is spreading. It said these patients' links to Ebola "were only identified after profound investigation." Most of the newly confirmed cases have been in Beni, where there has sometimes been violent resistance to outbreak responders.

Earlier this month new measures were introduced in Beni, including authorization for health teams to call on security forces during safe burials and criminal sanctions against those who hide suspected cases or don't send them to Ebola clinics.

Experts said such suspicion was fueling the epidemic.

"It's very worrying that new cases are appearing that we can't trace," said Julie Fischer, a global health expert at Georgetown University. She said shutting down an Ebola outbreak often requires that aid workers convince people to avoid risky behaviors like traditional burial practices and poor infection control. "If there's no trust in these experts, it's hard. But if there's violence, it's impossible."

The International Rescue Committee noted that the daily number of cases has doubled just in the last week compared to last month, largely due to the forced suspension of control efforts in late September after a deadly rebel attack in Beni.

"If there is insecurity in the region and if the community stops us from implementing our control activities, then our hands are tied," said Dr. Michelle Gayer, senior director of emergency health at the IRC. She predicted that unless the situation drastically changes, Ebola could drag into next year. "Outbreaks are very hard to predict, but I have a feeling we're looking at another six months."

WHO's director-general, Tedros Adhanom Ghebreyesus, said they were "trying within this year" to stop Ebola.

Fischer said it was encouraging that WHO had at least convened its expert committee to reflect on the gravity of the epidemic in its early stages, something the U.N. agency failed to do during the devastating West Africa Ebola outbreak.

"The decision to convene the emergency committee is certainly made by people haunted by what happened in 2014," Fischer said.

As the virus exploded in Guinea, Sierra Leone and Liberia in early 2014, WHO resisted numerous calls to declare the situation an international emergency. Not until August, when the virus has spread to multiple countries — and until 1,000 people had died — did WHO call an expert meeting to consider the outbreak's global implications.

An Associated Press investigation found WHO delayed declaring the outbreak to be a global emergency for months, partly out of fears such an announcement would anger the African countries involved or hurt their economies.