Madagascar heads to polls to choose one of 36 presidential candidates 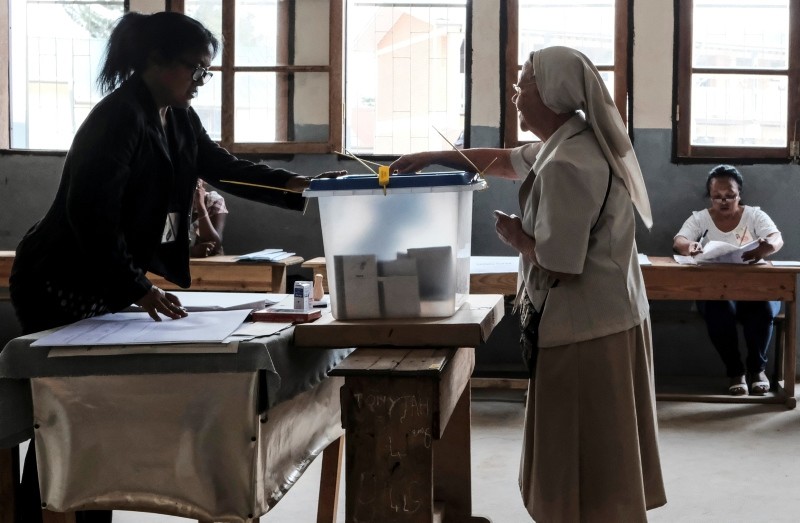 A voter casts her vote at a polling station in Antananarivo, Madagascar, Wednesday, Nov. 7, 2018. (AP Photo)
by Associated Press Nov 07, 2018 12:00 am
Voting started Wednesday in Madagascar where nearly 10 million registered voters are casting their ballots with hopes that a new leader will take this Indian Ocean island nation out of chronic poverty and corruption.

The 36 presidential candidates have all promised to improve the country's economy, create new jobs and end graft, but the three leaders in the race are familiar faces who offer little chance of a dramatic change, say political analysts.

"I was looking forward to this election because the misery in Madagascar is everywhere! Our country is rich! Why are the Malagasy people, for the most part, poor?" said Judith Rasolofo, 52, a housewife with five children. "I want to see something new in Madagascar!"

Bruno Bezara said he came to vote first thing in the morning.

"I was in a hurry to come and vote because it's very important," said Bezara, 65. "I want change because there are many things that do not work in our country."

The winner must take more than 50 percent of the votes cast and with such a large number of candidates, it is likely the race will go to a second round, scheduled for Dec. 19.

The three former presidents who are the leading candidates have all voted. Former President Marc Ravalomanana, who ruled between 2002 and 2009, voted in his Faravohitra neighborhood, in the center of the capital, Antananarivo.

Andry Rajoelina, who was president during the transitional period of 2009 to 2013, voted in the capital's Ambatobe district.

Voting took place normally in the center of Toamasina, a large port city on the east coast of the island.

The use of the single ballot, which includes the names and photos of all 36 candidates, somewhat slows the flow of polling stations.

With an estimated 76 percent of its 25 million people in extreme poverty, Madagascar is one of the world's poorest countries, according to the World Bank. There are 9.9 million registered voters who will go to the polling stations. Preliminary results are expected by Nov. 14 and officials have until Nov. 28 to declare the final outcome.

"We hope that the calm and orderly atmosphere will continue throughout the day and especially after the closing of the polls," said Christian Preda, head of the European Union Election Observation Mission in Antananarivo. "We hope that these elections will be an opportunity to consolidate the democratic achievements of the Malagasy."