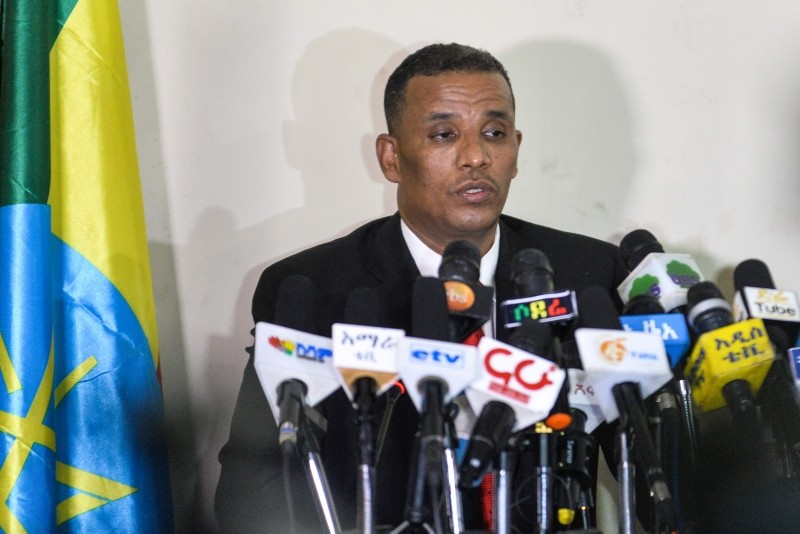 Ethiopiau2019s Attorney General Birhanu Tsegaye speaks about the corruption and human rights violation reports in the country following the detention of 63 military and intelligence officers in Addis Ababa on Nov. 12, 2018. (AFP Photo)
by Compiled from Wire Services Nov 12, 2018 12:00 am

Ethiopia's attorney general accused members of the security service of carrying out a grenade attack on a rally attended by the prime minister, as he announced details of a string of investigations that struck at the heart of the establishment.

While other officials implicated in the plot have fled the country, the former intelligence chief is now residing in northern Ethiopia and should turn himself in to authorities, he said.

The arrests are a rare move against the country's powerful security apparatus.

They represent a further flexing of power by reformist Prime Minister Abiy Ahmed, who is seeking to break with Ethiopia's authoritarian past, analysts said.

"Twenty-seven officials have been arrested for alleged corrupt practices, while 36 have been detained for alleged human rights abuses, with a manhunt underway for remaining suspects," Berhanu said at a press conference.

Tsegaye said that "the crimes against humanity" were committed by high ranking officials and operatives of National Intelligence and Security Service (NISS), which operated dozens of secret prisons throughout Ethiopia.

"People were being detained without trail for long time in the prisons," he alleged.

"Inhumane torture, bodily harm, forced disappearances, sexual attacks against men and women inmates were committed in those prisons," he said.

"Detainees were subjected to various abuses including gang rapes, sodomy, prolonged exposure to extreme heat and cold, waterboarding and deprivation of sunlight," he added.

According to him, the violations had been "institutionalized" and also victimized family members of the incarcerated citizens.

Berhanu did not name any of the suspects but said some had already been taken to court.

He said the suspected corruption occurred at the military-run Metals and Engineering Corporation (METEC).

"METEC officials were involved in purchases of $2 billion (1.8 billion euros) worth of goods without any bidding process," Berhanu said.

He said METEC officials made their family members as middlemen in their own bidding processes.

He pointed out that the company had been involved in the construction of Ethiopia's immense, signature Grand Ethiopian Renaissance Dam.

Abiy made an unusual public admission earlier this year that security officials had engaged in abuses and torture with impunity.

Abiy has pushed through a series of jolting reforms since coming to power in April, including a peace deal with neighboring Eritrea, a pledge to open up state-dominated sectors to private investors and promises to rein in the security services.

Yilikal Getnet, an opposition figure, told The Associated Press the public had demanded the arrests of the former officials.

"These have been issues that we in the opposition have long been calling for, too," he said, adding that Ethiopia needs a truth and reconciliation process to investigate past misdoings. "The ruling party alone can't bring justice for all these atrocities committed in the past."

Under the previous government, Ethiopia, a close security ally of the West, used to be accused of rights violations by human rights activists. Since Abiy, 42, came to power in April his new government has released several thousand political prisoners, permitted exiled opposition groups to return home, dropped terror charges against prominent opposition politicians and permitted the media to operate more freely.

Despite the reforms, ethnic-based clashes are continuing in some parts of Ethiopia and pose the most serious threat to Abiy's leadership of this East African nation of 100 million people.

"These arrests are an important first step toward ensuring full accountability for the abuses that have dogged the country for several decades," said Joan Nyanyuki, Amnesty International's East Africa Director. "Many of these officials were at the helm of government agencies infamous for perpetrating gross human rights violations, such as torture and the arbitrary detention of people including in secret facilities. We urge the government of Prime Minister Abiy to take further steps to ensure justice and accountability for all past human rights violations and abuses, while at the same time ensuring all the individuals arrested receive fair trials."