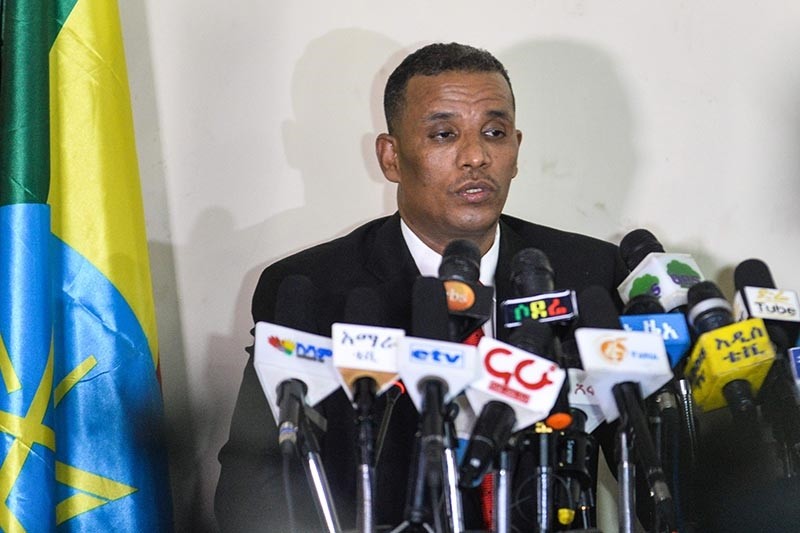 Ethiopiau2019s Attorney General Birhanu Tsegaye speaks about the corruption and human rights violation reports in the country, following the detention of 63 military and intelligence officers in Addis Ababa on Nov. 12, 2018. (AFP Photo)
by Compiled from Wire Services Nov 13, 2018 12:00 am

Ethiopian authorities have arrested the former head of the military-run industrial conglomerate METEC, state media reported on Tuesday, after the attorney general said investigations had uncovered corruption at the firm.

Kinfe Dagnew - who is a Major General in Ethiopia's army - was detained near the northwest town of Humera, close to the border with Sudan and Eritrea on Monday night, state-run broadcaster EBC said.

Earlier on Monday, Attorney General Berhanu Tsegaye said several officials at METEC had been arrested after he said investigations found the company had conducted international procurements totaling $2 billion without any bidding processes.

For decades, METEC has been a key player in an economy dominated by the state and the military. The top officials in the company, which manufactures military equipment and is also involved in many other sectors from agriculture to construction, are military officials.

The METEC suspects were among 63 intelligence officials, military personnel and businesspeople who have been arrested on allegations of rights violations and corruption.

The sweeping high-profile arrests carried out in recent days are a result of Prime Minister Abiy Ahmed's order for a monthslong investigation into misdoings under the previous government.

Tsegaye told the media that some of those arrested are suspected of abuses of prisoners including "beatings, forced confessions, sodomy, rape, electrocution and even killings."

Tsegaye also said that Ethiopia's former spy chief is suspected of involvement in an attempt to assassinate the new prime minster at a rally on June 23. While other officials implicated in the plot have fled the country, the former intelligence chief is now residing in northern Ethiopia and should turn himself into authorities, he said.

Under the previous government, Ethiopia, a close security ally of the West, used to be accused of rights violations by human rights activists. Since Abiy, 42, came to power in April his new government has released several thousand political prisoners, permitted exiled opposition groups to return home, dropped terror charges against prominent opposition politicians and permitted the media to operate more freely.

Despite the reforms, ethnic-based clashes are continuing in some parts of Ethiopia and pose the most serious threat to Abiy's leadership of this East African nation of 100 million people.