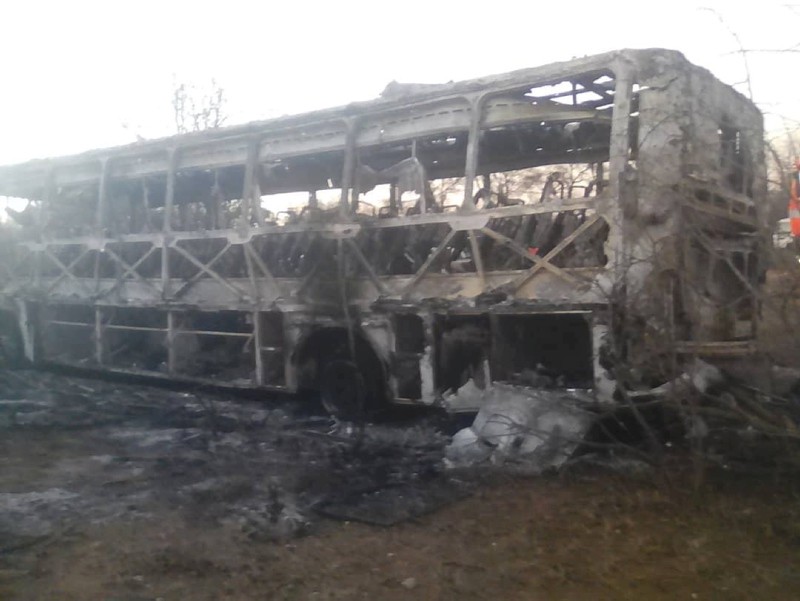 Fire swept through a passenger bus in Zimbabwe, killing more than 42 people and injuring at least 20, some of whom suffered severe burns, authorities said Friday.

A photograph posted on Twitter by the Zimbabwe Red Cross shows the remains of the bus that was completely incinerated late Thursday. The Red Cross said its teams responded to a "horrific accident" involving a bus heading to neighboring South Africa at around midnight.

"Combustible material was allowed onto the bus, thus causing a conflagration which entrapped, scalded and consumed innocent passengers," President Emmerson Mnangagwa said in a condolence message.

Mnangagwa said the government should "take appropriate measures which comprehensively deal with this growing menace on our roads."

"At the moment we know that more than 42 people died," police spokeswoman Charity Charamba told AFP after the accident late on Thursday, adding many of the dead were "burnt beyond recognition".

She said the driver who survived the accident "suddenly sensed a strange smell in the bus" around 11:00 pm (2100 GMT) and pulled off the road turned on the lights and the bus caught fire.

Many of the 70 passengers were trapped in the inferno.

The bus company Brooklyn Buses said in a statement released to local media that it was "remorseful, deeply shaken" by the loss of so many lives.

Last week, a collision between two buses in Zimbabwe killed 50 people and injured about 80.

The bus company gave a lower death toll of 31, adding that many others were suffering "serious injuries".

The vehicle was travelling from the small town of Zvishavane to South Africa's border town of Musina when the explosion happened.

Some passengers reportedly escaped through windows.

Last week, 50 people were killed when two buses collided on a road between the capital Harare and the eastern town of Rusape.

"I was devastated to learn of last night's tragedy, the second major accident in recent weeks," President Emmerson Mnangagwa said on Twitter.

"I urge all my fellow citizens to be extra cautious on the roads -- check the safety of your vehicles, slow down, put safety first."

Traffic accidents are common in Zimbabwe, where roads are riddled with potholes due to years of underfunding and neglect, and driving standards can be poor.

In June last year, 43 people were killed in a bus crash in the north, along the highway leading to neighbouring Zambia.