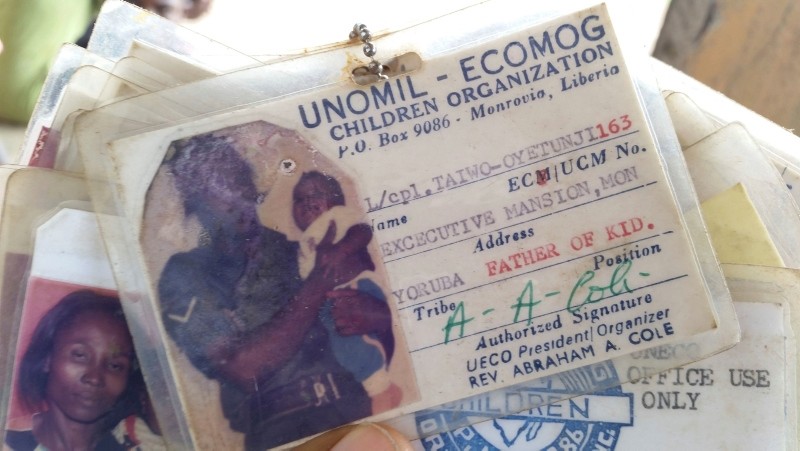 In this photo taken Saturday, Sept. 22, 2018, a photo shows baby Moses Z . Kaine, being carried by his father, a West Africa peacekeeper, at a center set up to register and support children left behind by peacekeepers in Liberia, Monrovia. (AP Photo)
by Associated Press Nov 21, 2018 12:00 am

The only memento Moses Z. Kaine has from his father is a T-shirt, left more than two decades ago when the peacekeeper's tour of duty finished and he returned home, leaving his pregnant girlfriend behind.

"I was still in my mother's womb when my father ended his duties and left Liberia," the 21-year-old told The Associated Press. "My mother says my father wore this T-shirt when he came around to visit her. She still can remember those moments well."

The story is as old as war itself: Children left behind by the soldiers who fathered them.

Kaine is among more than 6,000 children fathered by soldiers in a West African peacekeeping mission that came to Liberia in 1990 and left eight years later, according to a center set up to register and support them. A smaller number of children were fathered by members of a separate U.N. mission that emerged as Liberia struggled to emerge from a vicious civil war.

Many of the Liberian children, now grown, have never met their fathers. Others were abandoned by their mothers and grew up as orphans. As they enter adulthood two decades after the peacekeepers' departure, they are the focus of new attention in a world coming to terms with sexual exploitation and abuse by soldiers sent to protect vulnerable communities.

Unlike many of the Liberian children left behind, Kaine says his father looked out for him, asking if he could bring the boy and his mother home to where he lived.

"Family pressure and fears made my mother remain," he said pensively.

Even the few details Kaine has about his father are inconclusive: The T-shirt worn by his father, Lt. Cpl. Taiwo-Oyetunji, still clearly bears the seal of the West African regional body ECOWAS, under whose umbrella the ECOMOG peacekeepers arrived. It's a shirt from Niger, though his father's ID says he is of the Yoruba tribe, from Nigeria. Kaine became emotional upon seeing an identity card with him pictured in his uniformed father's arms.

The young man recently made his way to a support center in Liberia's capital, Monrovia, that was set up to help the thousands of children left behind by peacekeepers.

The United Nations-ECOMOG Children Organization, or UNECO, encouraged soldiers to register themselves and their children. They say they registered more than 6,000 children and eventually set up an orphanage on Monrovia's outskirts.

Many of the West African soldiers cooperated, while others had to be found to register, said Ciah Cole, who set up the center with her husband, the Rev. Abraham Cole. Still, it was not possible to register all of them and much of the material was lost over the years, severing any chance for the children to track their fathers down.

Liberia was in turmoil for 14 years amid back-to-back civil wars that left an estimated 250,000 people dead and forced more than half a million to flee to neighboring countries. The first civil war, which began in 1989 and became one of Africa's bloodiest conflicts, led to a regional peacekeeping force that at one point reached 15,000 troops. A U.N peacekeeping mission later emerged, only to leave Liberia earlier this year.

While many women were raped during the fighting, the thousands of peacekeepers' children were largely the product of relationships Liberian women sought out as a shelter from hunger and hardship. At the time, peacekeepers had some of the best access to food in Monrovia.

"People were starving. There was nowhere to turn and women had to look for different ways to survive," Cole said.

The relationships went against the code of ethics for both ECOWAS and the U.N., which forbid sexual contact with people under the peacekeepers' protection because the potential for exploitation and abuse was high. In the early 2000s, the U.N. refugee agency reported that peacekeepers and humanitarian workers in Liberia had demanded sex in exchange for food, medicines, shelter and education.

Enforcing bans on such relationships remains a major challenge, according to an Associated Press investigation last year that uncovered roughly 2,000 allegations of sexual abuse and exploitation by U.N. peacekeepers in various countries over a 12-year period.

In Liberia, the thousands of children who resulted from those relationships have now been largely absorbed by society. Nearly 40 of them still live at the UNECO center, which is painted in the peacekeepers' camouflage colors. Over the years, the center has helped to raise many of the children with little financial support.

"When there is no father, no mother, you are handicapped," said 24-year-old Nana Addo, who was placed in the center by his mother in 1995. He has lost hope of ever seeing his Ghanaian father "but if he's still alive and I see him, I will be happy."

The problem is larger than reported, but resources are scarce, said Cole.

"Many of the mothers are hiding, refusing to identify themselves because they say it is shameful and disgraceful that those solders had children by them but could not return to see what's happening to the children they left behind."

She called on governments that contributed peacekeepers to Liberia to assist the children, and urged Liberia's government to set an example.

While a far smaller number of the children were fathered by members of the U.N. mission that arrived years later, the U.N. says it made outreach efforts so Liberian women could register any complaints of sexual exploitation and abuse and receive assistance.

Spokespeople at ECOWAS headquarters in Abuja, Nigeria declined to comment to The Associated Press, saying they did not have the information needed to respond.

Mamadou Dalaba, a former Guinean soldier, said many colleagues impregnated local women and left without telling them once the war was over.

Another who served in Guinea's first contingent of soldiers in 1990 said many men had children with Liberian girlfriends in Monrovia. The men looked after the children as long as they could before returning home, he said, speaking on condition of anonymity because of the sensitivity of the matter.

For the Liberians left behind, those broken bonds still hurt more than two decades later.

Kaine, the young man who clings to his father's T-shirt and ID card, says he was fortunate to grow up with his mother. He wants to become a mechanic but says he had to leave school this semester due to lack of support. "The country has become too tough," he said, shaking his head.

He, too, issued an appeal to all the peacekeepers who left Liberian children behind to come back and support them.

"In today's Liberia, depending on the government to help people like me is like relying on a broken stick to stand and walk," he said.