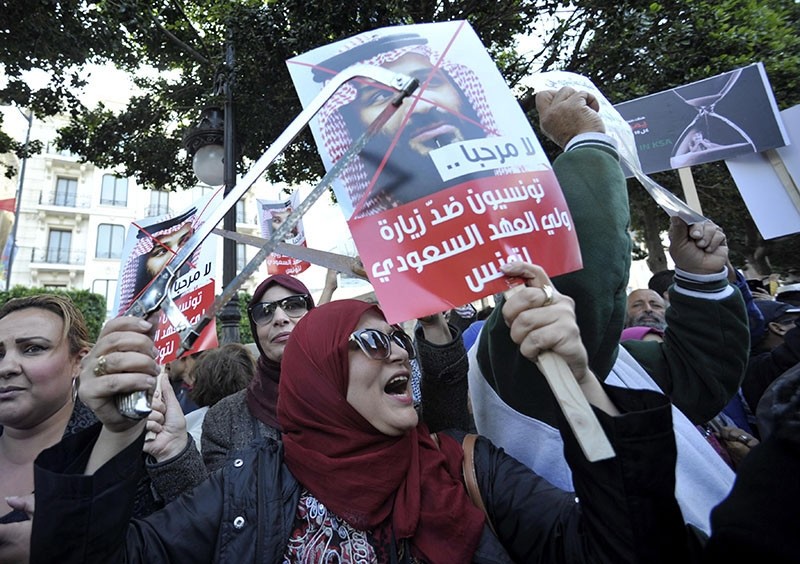 Hundreds of Tunisians protested on Tuesday against a visit by Saudi Arabia's crown prince, denouncing the top Saudi royal as a murderer in the second straight day of demonstrations condemning the killing of Saudi journalist Jamal Khashoggi.

Crown Prince Mohammed bin Salman, heir to the throne of the world's top oil exporter, departed from Cairo on Tuesday and was expected in Tunis in the late afternoon on a tour of Arab states that has also taken him to Bahrain and the United Arab Emirates.

The killing of Khashoggi, a Washington Post columnist and a critic of the crown prince, at Riyadh's consulate in Istanbul six weeks ago has strained Saudi Arabia's ties with the West and battered Prince Mohammed's image abroad.

Saudi Arabia has said the prince had no prior knowledge of the murder. After offering numerous contradictory explanations, Riyadh said last month that Khashoggi had been killed and his body dismembered when negotiations to persuade him to return to Saudi Arabia failed.

Hundreds of protesters marched through the central Habib Bourguiba avenue in Tunis, scene of the mass protests that toppled Ben Ali in 2011.

They chanted "the murderer is not welcome in Tunisia" and "Shame on Tunisia's rulers" for receiving bin Salman.

Journalists put up a huge banner at their union showing the prince with a saw, which Turkish sources have said was used to dismember Khashoggi in Istanbul. Dozens of Tunisian rights activists and journalists staged a smaller protest on Monday.

Last week Nourredine Ben Ticha, adviser to Tunisia's President Beji Caid Essebsi, said the truth about the killing of the Saudi journalist needed to be established but the incident should not be used to harm the kingdom's stability.

Tunisia and Saudi Arabia have very different political systems. The kingdom is an absolute monarchy while the North African country has undergone a democratic transition since 2011.

Tunisia has been holding free elections since then and agreed in 2014 on a constitution guaranteeing fundamental rights such as freedom of speech.