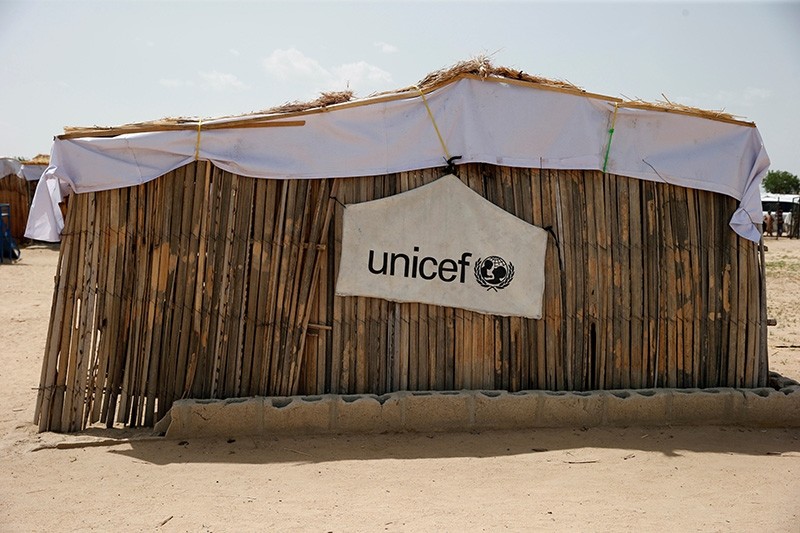 A banner with the UNICEF logo is seen hanging on a makeshift school at an internally displaced persons (IDP) camp on the outskirts of Maiduguri, northeast Nigeria June 6, 2017. (Reuters Photo)
by Associated Press
Dec 14, 2018 12:00 am

Nigeria's military on Friday suspended the activities of UNICEF in the terror-threatened northeast, accusing the U.N. agency of "training selected persons for clandestine activities."

The statement said UNICEF's activities are on hold until further notice because it has "abdicated its primary duty of catering for the wellbeing of children and the vulnerable."

Military spokesman Onyema Nwachukwu alleged that UNICEF carried out the training this week in Maiduguri, the Borno state capital and birthplace of the Boko Haram terrorist group.

The spokesman accused UNICEF of harming Nigeria's counterterror efforts via "spurious and unconfirmed allegations" of human rights abuses by the military.

A UNICEF official said the agency was trying to verify the military's action. She spoke on condition of anonymity because she was not authorized to speak to reporters.

Friction between Nigerian officials and UNICEF and other arms of the U.N. has surfaced before.

In January 2017, the Borno state governor accused UNICEF and other aid groups of profiting from funds meant to help those fleeing Boko Haram's uprising and said they should leave the country. After U.N. officials flew in to discuss his comments, Gov. Kashim Shettima apologized.

His criticism followed charges by President Muhammadu Buhari that the U.N. and private agencies were exaggerating a massive humanitarian crisis in the northeast to boost funding.

U.N. officials earlier this year called the humanitarian crisis in northeastern Nigeria one of the worst in the world, with more than 7 million people in need of assistance.

UNICEF, in addition to work such as enrolling hundreds of thousands of affected children in school, has been openly critical of Boko Haram's use of dozens of children as "human bombs" in its decade-old insurgency.

More than 20,000 people have been killed over the years, with thousands abducted. UNICEF this week shared the story of a former abductee, one of scores of children it said it has helped to support.