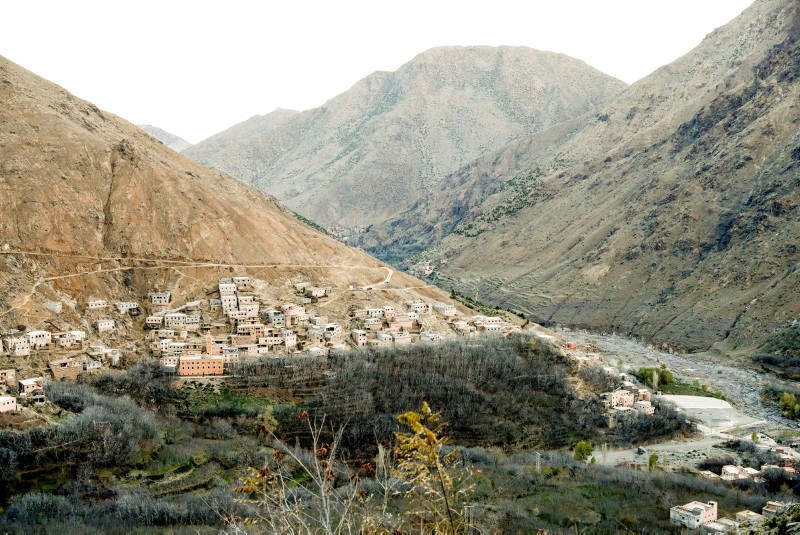 A general view of Imlil, a village nearby popular trekking area in the Atlas mountains where Maren Ueland from Norway and Louisa Vesterager Jespersen from Denmark were found killed, in Morocco, Dec. 20, 2018. (NTB Scanpix/Terje Bendiksby via Reuters)
by Compiled from Wire Services Dec 21, 2018 12:00 am

Norwegian police said Friday that a video which allegedly shows the slaying of a Scandinavian university student in a remote part of Morocco's Atlas Mountains is likely authentic.

"There is no concrete evidence indicating the video is not real," it said.

Morocco's general prosecutor previously confirmed on Thursday the authenticity of the video in which the four suspects in the murder the women while pledging allegiance to Daesh terrorist group and its leader Abu Bakr al-Baghdadi.

In the video, which was shared on social media, the suspects threatened to carry out attacks, the general prosecutor said in a statement.

Investigations by Morocco's Central Bureau for Judicial Investigation also showed that the video was made last week before the killing of the two women.

Four men have been detained in Morocco in the slayings of two female tourists from Denmark and Norway who were hiking in the Atlas Mountains. Nine others were also detained on Friday.

Authorities in Morocco consider the killings a terrorist act. The women's bodies were discovered Monday with stab wounds in their necks.

Commenting on another video in which the four suspects appear to pledge allegiance to the Daesh terrorist group, the NCIS said that "neither Norway nor Denmark was mentioned in the video, nor was there anything specific about what action they should perform."

The victims have been identified as 24-year-old Louisa Vesterager Jespersen of Denmark and 28-year-old Maren Ueland of Norway. They lived in southern Norway, where they attended university.

Moroccan authorities said a plane carrying their caskets took off Friday from Casablanca for Denmark.

The murders have prompted condemnation from authorities in Denmark and Norway.

Norway's Prime Minister Erna Solberg condemned what she called a "brutal and meaningless attack on innocents."

Moroccan government spokesman Mustapha Khalfi described the killings as a "terrorist act" while Prime Minister Saad Eddine El Othmani said it was a "stab in the back of Morocco and Moroccans".

Tourism is a cornerstone of Morocco's economy, accounting for 10 percent of national income.

The NCIS said it was trying to map the women's activities before their departure for the village of Imlil, a frequent starting point for treks to Mount Toubkal, North Africa's highest peak. The women were found 10 kilometers (6.2 miles) from the village.

Morocco is generally considered safe for tourists but it has been routing out extremists for years.

Compared to other countries in North Africa, Morocco has seen relatively few militant attacks. The last major one was in April 2011, when 17 people were killed in the bombing of a restaurant in Marrakech.

On Saturday, a gathering will be held outside the Norwegian embassy in the Moroccan capital Rabat to show solidarity with the families of the victims and condemn terrorism. Thousands of people have said on Facebook they will attend.

Later on Friday, people will march with torches through Bryne, the coastal Norwegian hometown of Ueland, to show solidarity with her family.