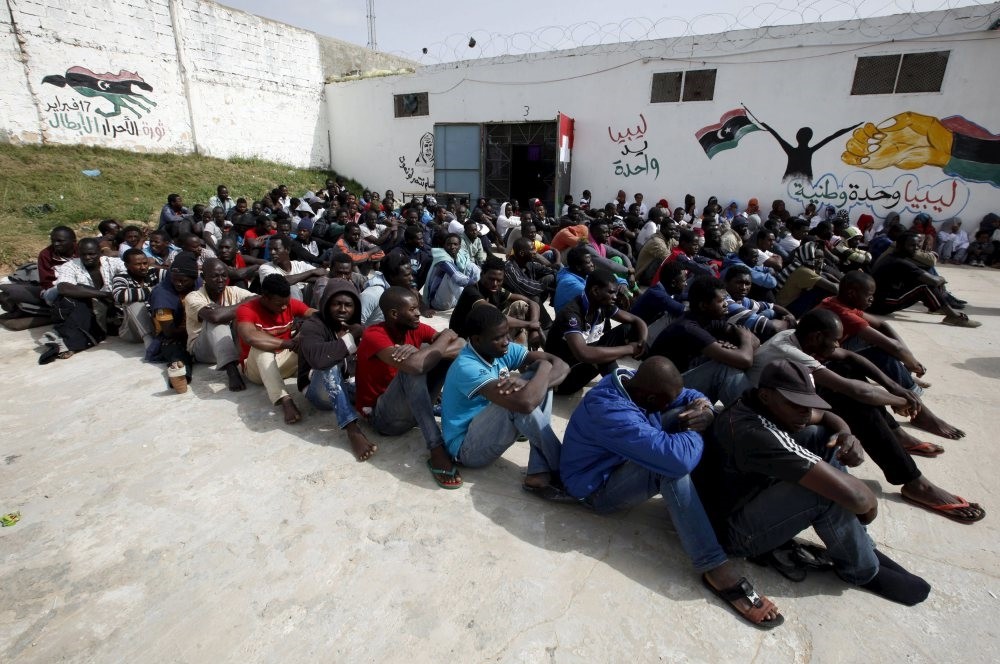 Illegal immigrants from sub-Saharan Africa sit in the Abu Saleem detention center in Tripoli, April 21, 2015.
by Compiled from Wire Services
Dec 24, 2018 12:00 am

A civilian ship with 33 migrants aboard rescued off the Libyan coast appealed yesterday for a European port to take them to before the weather turns.

German NGO ship Sea Watch 3 rescued the migrants, including four women and six children, when they were in difficulty attempting the perilous journey across the Mediterranean on Saturday. "We have requested a port of safety to disembark those people," Sea Watch spokesman Ruben Neugebauer told AFP. "There is no country willing so far to offer the people safe port."

Requests to receive the Dutch-flagged vessel have been made to several countries, he said, and Italy and Malta have refused. Their governments say that they have to bear an unfair burden of migrants arriving from Africa. "We will try everything to get a port of safety before Christmas, because on the 25th the weather is worsening, so we urge European states to find a solution within the next 24 hours," Neugebauer said.

The rescued migrants include people from Nigeria, Libya and Ivory Coast.

A Spanish civilian rescue ship with over 300 migrants also rescued off Libya was on Saturday authorized to sail to Spain after Malta and Italy declined to let it come to port. Libya, France and Tunisia did not respond to a request from Spanish NGO Proactiva Open Arms to disembark the 311 men, women, children and babies, Spain said, after Italy's hard-right Interior Minister Matteo Salvini said the migrants were not welcome. "My answer is clear: Italian ports are closed!" Salvini tweeted. "For the traffickers of human beings and for those who help them, the fun is over."

Proactiva Open Arms said on Friday that it had rescued more than 300 migrants from three vessels in difficulty, including men, women, some of them pregnant, children and babies. NGO spokeswoman Laura Lanuza told AFP that the boat was heading for Algeciras, near Gibraltar. Journey time will depend on the weather but take "five to six days," she said.

Open Arms' founder Oscar Camps tweeted back at Salvini that "your rhetoric and your message will, like everything in this life, end. But you should know that in a few decades your descendants will be ashamed of what you do and say."

The vessel started patrolling the Mediterranean with two other boats run by migrant aid groups off the Libyan coast in late November.

Aid groups have been sending rescue vessels into these waters despite vocal opposition from Salvini. Accusing the groups of acting as a "taxi service" for migrants, he has denied them access to Italy's ports. Malta too has been increasingly unwilling to host rescue vessels.In June, Italy and Malta denied entrance to another aid ship belonging to SOS Mediterranee Sea and Doctors Without Borders that was carrying over 600 rescued migrants. Spain granted it entry to end its weeklong saga at sea, as Spain's new center-left government made the humane treatment of migrants one of its first policy decisions in contrast with the hardline taken by Italy's populist leaders.