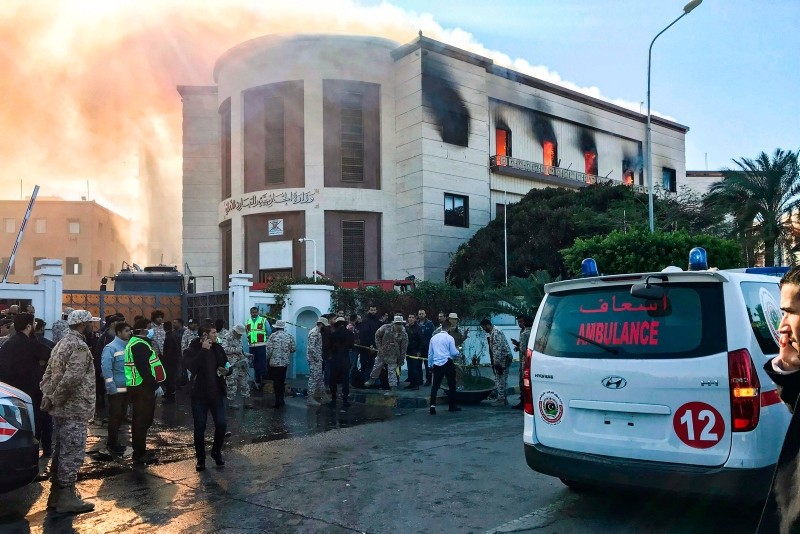 A picture taken on December 25, 2018 shows ambulances, paramedics, and security officers at the scene of an attack outside the Libyan foreign ministry headquarters in the capital Tripoli. (AFP Photo)
by Compiled from Wire Services Dec 25, 2018 12:00 am

A suicide bomber targeted Libya's Foreign Ministry in the capital Tripoli on Tuesday, killing at least three person and injuring another.

The militants believed to be the members of the Daesh terrorist group first arrived in the area and opened fire on the premises. Security officials told Associated Press a second suicide bomber was shot dead by guards before he could detonate his explosive vest.

No one immediately claimed the attack, which bore the hallmarks of the Daesh terrorist group.

Foreign Minister Mohamed Taher Siala was not in the building during the attack and was accompanying Presidential Council Chairman Fayez al-Sarraj for a visit in western town of Zawiyah, AA reported.

Oil-rich Libya has been a haven for militants since a NATO-backed 2011 uprising toppled dictator Moammar Gadhafi. The country is split between rival governments, one backed by the U.N. and based in Tripoli and the other based in the eastern city of Tobruk, led by former military strongman Khalifa Haftar and backed primarily by neighboring Egypt. Each government is backed by an array of local militias and tribes. There are also dozens of clashing militia groups vying for power and state wealth.