Progress against Ebola in Congo will be lost if violence continues, WHO warns 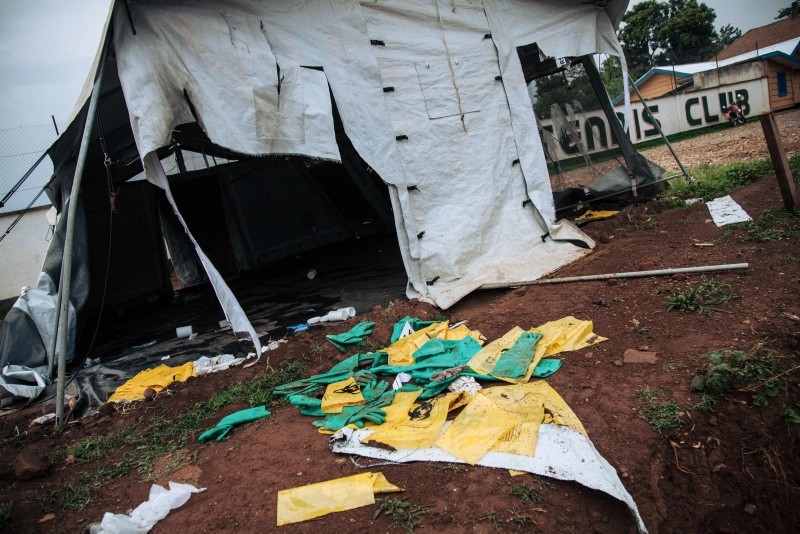 Picture taken on Dec. 27, 2018 shows protective equipment for Ebola care left on the ground next to ransacked tents by demonstrators at the Ebola transit center in Beni, following a demonstration against the postponement of elections. (AFP Photo)
by Dec 28, 2018 12:00 am
Progress in fighting Democratic Republic of Congo's Ebola outbreak, the second worst ever, will be reversed if fighting continues around the disease hotspots of Beni and Butembo, the head of the World Health Organization (WHO) said on Friday.

"We have reached a critical point in the Ebola response," WHO director general Tedros Adhanom Ghebreyesus said in a statement. "After an intensification of field activities, we were seeing hopeful signs in many areas, including a recent decrease in cases in Beni.

"These gains could be lost if we suffer a period of prolonged insecurity, resulting in increased transmission. That would be a tragedy for the local population, who have already suffered too much."

The disease has killed 356 of the 585 people infected during the almost six-month outbreak, and one-fifth of the cases have occurred within the past three weeks, according to a weekly update from WHO.

The epidemic in a volatile part of Democratic Republic of Congo is now only surpassed by the 2013-2016 outbreak in West Africa, where more than 28,000 cases were confirmed.

Congo has suffered 10 Ebola outbreaks since the virus was discovered there in 1976. It spreads through contact with bodily fluids and causes haemorrhagic fever with severe vomiting, diarrhoea and bleeding.

On Thursday, Congo's Health Ministry said 24 patients fled an Ebola treatment centre in Beni when it came under attack by people protesting the cancellation of voting in the eastern city in Sunday's presidential election.

"Protests at government buildings in Beni spilled over to an Ebola transit centre, frightening people waiting for Ebola test results and the staff who were caring for them. Staff at the centre temporarily withdrew and most suspected cases were transferred to a nearby treatment centre," Tedros said.

Health teams in Beni were prevented from carrying out critical field work, including vaccinations, tracing of potential Ebola carriers, and following up on alerts of potential new cases.

In Butembo, healthworkers had been unable to do vaccinations or trace people who may have come into contact with the disease - a critical part of preventing its spread.

In other areas, the fight against Ebola had continued, and local communities were generally supportive of the health teams, Tedros said.