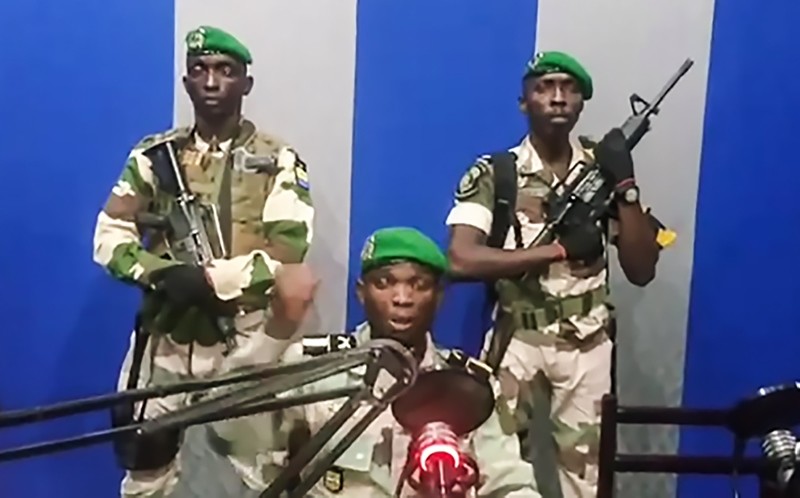 A group of military officers in central African nation of Gabon staged an apparent coup early Monday morning, seizing the state radio station and declaring their dissatisfaction with President Ali Bongo, who is recovering from a stroke in Morocco.

The government of Gabon soon declared that the coup failed most of those involved were arrested. "Calm has returned, the situation is under control," government spokesman Guy-Bertrand Mapangou told the French Press Agency (AFP).

Authorities have regained control of the state broadcasting offices and a major thoroughfare in the capital, Libreville, which were the only areas taken by the plotters.

The chief military rebel who led a failed coup in Gabon on Monday has been arrested and two of his commandos killed after they stormed a public radio station, the presidency said. Security forces stormed the radio station in the capital Libreville to take it back, killing two rebel troops, arresting their leader and freeing journalists who had been forced to help rebels make their appeal.

"The situation is under control," the presidency statement said.

Six rebel troops earlier Monday burst into the state radio broadcasting station, " neutralizing" gendarmes in front of the building before making their broadcast, it said.

The rebel soldiers said in their statement that a New Year's Eve address by Bongo "reinforced doubts about the president's ability to continue to carry out of the responsibilities of his office," which was read by Lieutenant Kelly Ondo Obiang, the leader of the self-declared Patriotic Movement of the Defence and Security Forces of Gabon, at around 4:30 a.m. local time He was flanked by two other soldiers holding weapons and all were dressed in camouflage uniforms and green berets. 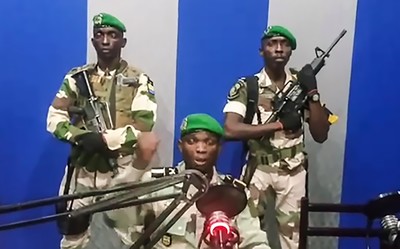 In this video grab made on a video footage obtained on YouTube on January 7, 2019, Gabon soldiers on state radio called on the people to "rise up" and announced a "national restoration council" would be formed, as an ailing President Ali Bongo is out of the country

Most of Libreville remained calm but there was a strong police and military presence on the street and helicopters circled overhead amid sounds of sporadic gunfire.

A curfew has been imposed over the capital, Libreville, and the internet has been cut. The city on the Atlantic Ocean coast is being patrolled by military tanks and armed vehicles.

Security forces have been deployed in the capital and will remain there over the coming days in order to maintain order, Mapangou said. The gunfire, he said, was used to control a crowd. The elite Republican Guard was deployed around the building and armored vehicles blocked access to the area, an Agence France-Presse (AFP) correspondent saw. In a rundown district nearby, dozens of young people torched a car and set fire to tires, while the security forces fired teargas to try to disperse them.

The African Union said it "strongly condemned" the coup attempt and reaffirmed its "total rejection of all unconstitutional change of power." France also condemned an attempted coup in its former colony Gabon and called on its citizens in the capital Libreville to avoid moving around the city. "We condemn any attempt to change government outside constitutional rules," French foreign ministry spokeswoman Agnes von der Muhll said in a statement. "Gabon's stability can only be ensured in strict compliance with the provisions of its constitution."

Bongo, 59, was hospitalized in October in Saudi Arabia after suffering a stroke. He has been in Moroccon capital Rabat since November to continue treatment.

In his speech on New Year's, Bongo acknowledged health problems but said he was recovering. He slurred some of his words and did not move his right arm, but otherwise appeared in decent health.

The MPJFDS considers Bongo's speech "shameful" for a "country (which) has lost its dignity", the officer said in the speech on state delivered Monday.

In his absence, the Constitutional Court transferred part of the powers of the president to the prime minister and the vice president. The statement read out by rebel soldiers attacked the arrangement as "illegitimate and illegal."

The Bongo family has ruled the oil-producing country for nearly half a century. Bongo has been president since succeeding his father, Omar, who died in 2009. His re-election in 2016 was marred by claims of fraud and violent protest.

59-year-old Bongo became known variously by his initials of ABO, Ali B -- or, less flatteringly, as "Monsieur Fils" (Mr. Son).

He was born to a 15-year-old girl, Josephine Kama, in the Congolese city of Brazzaville, which at the time was still part of France's rapidly-shrinking colonial empire. Because he had been born abroad before his parents' marriage, Bongo for years fought rumors that he was a foreigner who had been adopted.

Amateurs of pop psychology keen for signs of filial insecurity would be sure to pounce on a record that Bongo made in 1977 as an aspiring funk singer. Now a Youtube curiosity, the album features top-class musicians, lavishly produced by associates of James Brown, and carries the title "A Brand New Man."

In those days, Bongo called himself by his birth name of Alain Bongo.

Within three years, though, shepherded by his father, he abandoned the path of entertainment and entered politics, a "new man" in career terms. He renamed himself Ali Bongo, converting to Islam like his father.

Bongo senior, who took office in 1967, had the reputation of a kleptocrat -- one of the wealthiest men in the world, with a fortune derived from Gabon's oil.

He was also a pillar of "Francafrique" -- a now much-contested strategy by which France bound itself to its former African colonies through cronyism, often tainted with corruption and rights abuses.

Bongo senior liked to claim that Ali and his elder sister Pascaline worked for him on the basis of their talent, and not nepotism.

As a young man, Bongo worked as his father's faithful lieutenant, traveling the world and building up extensive contacts in the United States and the Arab world at the time of the second oil boom.

In August 1989, he was appointed foreign minister at just 30, but had to step down two years later when a new constitution stipulated that cabinet members had to be at least 35.

He was back in government by 1999, at the head of the defense ministry.

There he remained until shortly before the start of the election campaign caused by the death of his father in 2009 after 42 years in office.

The handover to Bongo junior was not a surprise, given the years of grooming and his own ambitions, despite some opposition in the ruling Gabonese Democratic Party (PDG), and the shadow of corruption left by his father.

In 2016, he was narrowly re-elected for a second-year term by a few thousand votes, beating out opposition challenger Jean Ping after a campaign marred by bloody clashes and allegations of voter fraud.

Pitching to a country that had been run for decades by his family, Bongo tried the difficult task of posing as an agent of change -- packing each speech with words such as "renewal" and "innovation."

He unveiled a string of projects, including diversifying the economy, opening up markets to Asian investors, trimming the state sector, building a giant marina in the heart of the capital, Libreville.

"He made all these big announcements, but did they lead to anything?" asked Jean, an unemployed Libreville resident.

One of his enduring achievements, though, was to foster the environment, notably creating a wildlife park that surrounds the capital.

Bongo turfed out a string of long-standing officials and replaced them with a younger generation -- "he wanted to chase away his father's ghost and exercise control," a diplomatic observer said.

But to his detractors, Bongo was stiff and lacked the charm and communication skills of his father.

He attended some of Brazzaville's top schools and went on to study law in France, the former colonial power, but did not learn any of Gabon's local languages -- a major disadvantage.

His lavish spending, especially on luxury cars, also raised eyebrows in a country where oil wealth contrasts with widespread poverty.

In 1992, while still defense minister, he organized a trip to Gabon by Michael Jackson, and Jackson's brother, Jermaine, attended Bongo senior's funeral in 2009.

In 2017, Bongo went to London to record an album with the London Symphony Orchestra called "Symphonic Visions from Gabon" which he co-composed.

In 1989, Bongo married Sylvia, a Franco-Gabonese, with whom he had four children.