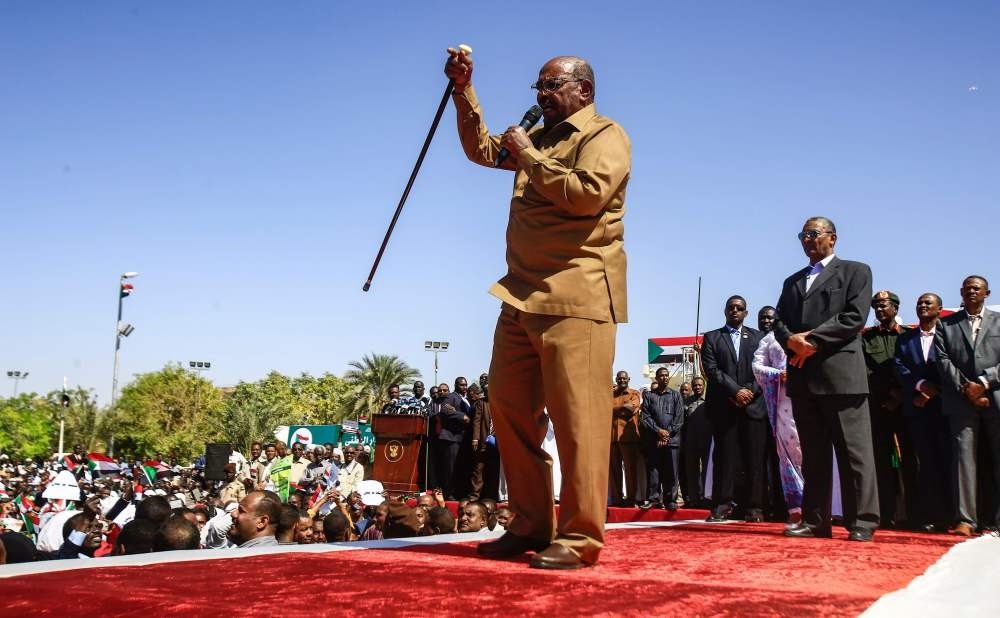 Sudan's President Omar al-Bashir speaks during a rally with his supporters in the Green Square, Khartoum, Jan. 9.
by Daily Sabah with Wires Jan 10, 2019 12:00 am

Amid ongoing anti-government protests, Sudan's President Omar al-Bashir rejected calls to step down in the largest rally in Khartoum since the protests erupted

In response to deadly anti-government protests that erupted across the country, Sudanese President Omar al-Bashir dismissed calls for him to step down while hundreds of people gathered in the country's capital yesterday in a show of support. The rally, by crowds of men and women backing al-Bashir, who has ruled Sudan since 1989, came as rival protesters prepared to stage their own demonstration in Khartoum.

Hundreds of riot police, soldiers and security agents, some carrying machine guns, were deployed around the site of the pro-government rally in the Green Yard, a large open space in the city, an Agence France-Presse (AFP) correspondent reported. Men, women and children carrying banners supporting al-Bashir arrived in buses from early in the morning. The rally was the first held in Khartoum in support of al-Bashir since protests erupted.

Addressing soldiers at a military base near Atbara on Tuesday, northeast of the capital Khartoum, al-Bashir scoffed at calls by demonstrators for him to hand over power to the military. "We have no problem because the army does not move in support of traitors, but moves to support the homeland and its achievements," al-Bashir said, according to excerpts of the speech broadcast by a TV channel affiliated to his ruling party, as reported by Reuters. Angry demonstrators have taken to the streets since December after a government decision to triple the price of bread at a time when the country has been hit by an acute shortage of foreign currency and inflation of 70 percent. Protests that initially broke out in towns and villages before spreading to Khartoum quickly turned into anti-government rallies.

Tuesdays' demonstration in al-Qadarif was one of the largest demonstrations in recent weeks. A video posted on social media showed hundreds of people chanting "freedom, peace, justice!" and "revolution is the people's choice." Reuters could not independently verify the footage. Three residents of al-Qadarif, who were not involved in the protests themselves, said security forces fired tear gas to break up the protest, which was organized by a group of unions known as the Sudanese Association of Professionals. Governor Al-Tayib Al-Amin told Reuters the protests were limited and that police dealt with the situation professionally.

Over the course of the past three weeks, demonstrations have rocked several Sudanese states amid mounting public frustration. The government has acknowledged that the protests started peacefully but said they turned violent when saboteurs infiltrated them. It has imposed emergency law in parts of Sudan along with nighttime curfews. Authorities also suspended classes in schools and universities across much of the country. Sudanese authorities say at least 19 people have been killed in street demonstrations against rising prices and shortages of basic commodities that swept several Sudanese states earlier this month. Opposition groups, for their part, say the death toll is closer to 40. A nation of 40 million, Sudan has struggled to recover from the loss of three-quarters of its oil output – its main source of foreign currency – when South Sudan seceded in 2011.