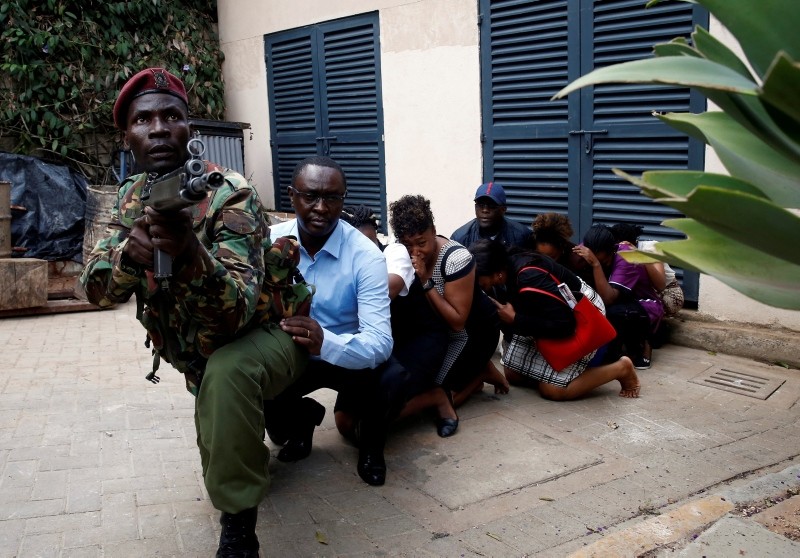 People are evacuated by a member of security forces at the scene where explosions and gunshots were heard at the Dusit hotel compound, in Nairobi, Kenya Jan. 15, 2019. (Reuters Photo)
by Compiled from Wire Services Jan 15, 2019 12:00 am

Kenya's President Uhuru Kenyatta said on Wednesday that the security operation at a Nairobi hotel complex attacked by militants was over and all the "terrorists" involved had been killed. Kenyatta said that 14 civilians were confirmed dead and over 700 others had been evacuated to safety by security forces. On Wednesday, a Kenyan police chief said that seven more civilians succumbed to their wounds, bringing the death toll to 21.

The coordinated assault began with an explosion that targeted three vehicles outside a bank, and a suicide bombing in the hotel lobby that severely wounded a number of guests, said Kenya's national police chief, Joseph Boinnet.

Al-Shabab — the Somalia-based terrorist group that carried out the 2013 Westgate Mall attack in Nairobi that left 67 people dead — claimed responsibility for the assault.

Survivors reported hearing a shattering blast and saw people mowed down by gunmen as they sat at a cafe. Victims were left lying on tables, bleeding.

"We were changing our shifts, and that is when I heard a loud blast and people were screaming," said Enoch Kibet, who works as a cleaner at the cafe and managed to crawl out a basement gate. "I couldn't believe I was alive. The blast was so loud and shook the whole complex."

Late Tuesday night, about eight hours after the siege began, Interior Minister Fred Matian'i said that all of the buildings affected by the attack had been secured and that security forces were mopping up.

"I would like to reiterate that the situation is under control and the country is safe," he said.

He did not say give a toll of the dead and wounded. And it was not clear how many attackers took part in the siege.

The complex in Nairobi's Westlands neighborhood includes a large hotel known as DusitD2, banks and offices. Several vehicles burned. People were being rushed, even carried, from the scene.

Ambulances, security forces and firefighters rushed to the scene, sirens wailing. A large group of women were hurried out by security forces, one woman still in hair curlers. Other groups were hurried away as plainclothes officers went shop to shop in the complex.

Kenyan hospitals appealed for blood donations even as the number of wounded remained unclear.

A Kenyan intelligence official said the country had been on high alert since November, with information about potential attacks on high-profile targets in Nairobi. The official was not authorized to talk to the media and spoke on condition of anonymity.

The attack came three years to the day after al-Shabab extremists attacked a Kenyan military base in neighboring Somalia, killing scores of people. The al-Qaida-linked al-Shabab objects to the presence of Kenyan troops in the turbulent Horn of Africa nation.