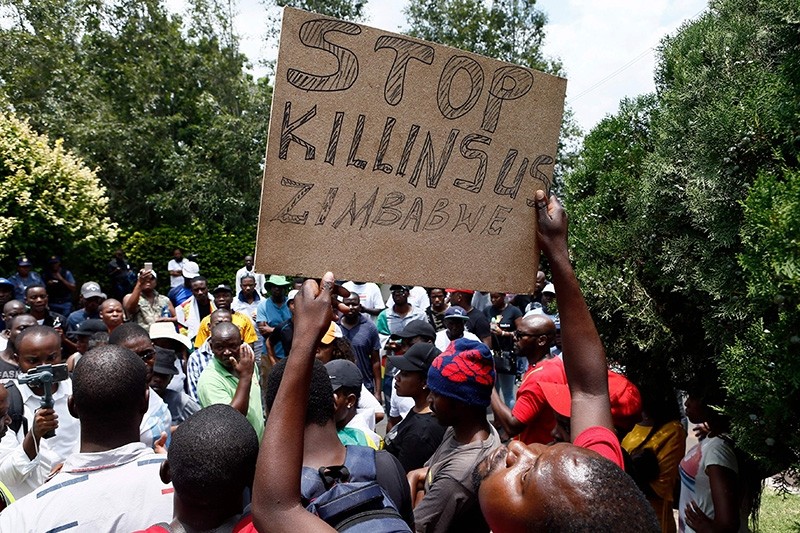 A protester holds a placard during a demonstration of Zimbabwean citizens outside the Zimbabwean Embassy in Pretoria on Jan. 16, 2019. (AFP Photo)
by Compiled from Wire Services Jan 21, 2019 12:52 pm

Zimbabwe's President Emmerson Mnangagwa announced on Sunday that he will skip next week's World Economic Forum in Davos in order to address mass protests against his economic policies at home.

"In light of the economic situation, I will be returning home after a highly productive week of bilateral trade and investment meetings," Mnangagwa wrote on Twitter.

"We will be ably represented in Davos by Minister of Finance, Mthuli Ncube. The first priority is to get Zimbabwe calm, stable and working again," he said.

Mnangagwa had been under growing pressure to come home from a two-week overseas visit as accounts emerged of abuses by security forces, including 12 deaths, dozens of people wounded by gunfire and others hunted down in their homes.

The protests are part of a backlash against Mnangagwa's government, which more than doubled the price of petrol and diesel last week.

In addition, Zimbabwe has been plagued by severe hard currency shortages that Mnangagwa has repeatedly promised to fix since his predecessor Robert Mugabe was ousted in a 2017 military coup.