Nigeria polls postponement to cost millions of dollars and voters 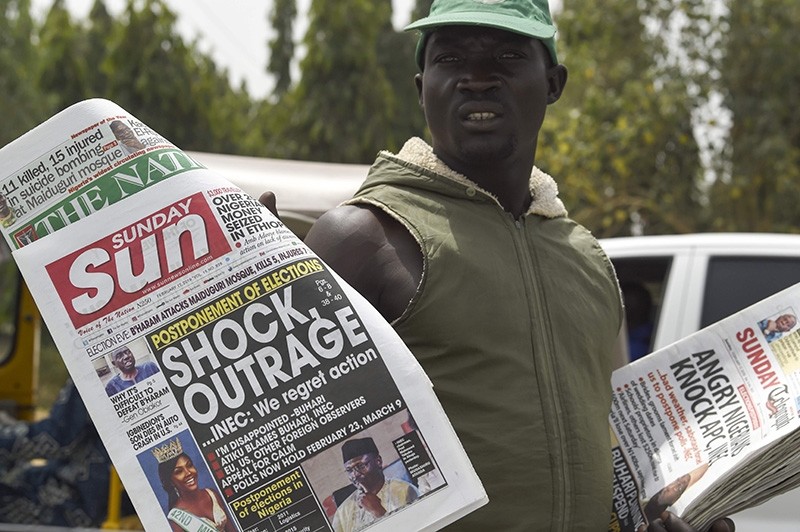 Nigerians on Sunday counted the cost of the last-minute postponement of presidential elections, with predictions the delay could lose the country billions of dollars.

The streets of Lagos, the country's sprawling commercial hub of more than 20 million people, were empty following disappointment and anger at the last-minute decision.

Some 84 million people were registered to vote for a new president and parliament on Saturday until the Independent National Electoral Commission announced a one-week delay.

The two main candidates -- President Muhammadu Buhari and Atiku Abubakar -- both called for calm, as INEC prepared to address logistical issues that hampered their preparations.

Despite the billions of dollars earned in oil revenue, most Nigerians live in poverty and traveling to their home towns and villages to vote is a financial sacrifice for many.

Most businesses shut down on Friday to allow employees to leave before movement restrictions were imposed throughout Saturday. Airports and land borders were also closed.

Analysts predicted that fewer people would make the trip again next week, which would make turnout low.

The director-general of the Lagos Chamber of Commerce and Industry, Muda Yusuf, estimated financial losses from the election delay at some $1.5 billion.

"The cost to the economy of the postponement of the election is horrendous," he was quoted as saying in the Sunday Vanguard newspaper.

"The economy was on partial shutdown the day before (Friday), and total shutdown on Saturday for the elections." he added.

Economist Bismark Rewane, however, said the most important cost was to Nigeria's reputation.

"Investors' confidence will be eroded," he said.

In the long term, when indirect costs were taken into account, the delay could cost the equivalent of 2 to 2.5 percent of gross domestic product.

In currency terms, he assessed the possible cost of the delay at "about $9 billion to $10 billion."

Meanwhile, social media was used to organize collections for street vendors who had bought perishable items to sell to voters that often wait in long lines.

The amount ultimately raised was unlikely to make much difference to tens of millions of people who live on less than $1.90 a day.

INEC announced the delay at 2:45 a.m. on Saturday, just over five hours before the nearly 120,000 polling units were due open across the country.

Yakubu said a combination of factors, including last-minute legal challenges to candidacies, bad weather and sabotage hampered the distribution of election materials.

Ballot boxes and other items, including voter card readers, were destroyed in three fires at three separate INEC offices in central and southeastern states in the last two weeks.

He explained that organizing elections in Africa's most populous nation of some 190 million people was an "enormous undertaking" and "operational challenges" were expected.

The election body took "full responsibility," he said but denied there had been any political interference.

The election is the sixth to be held in the 20 years since Nigeria returned to civilian rule after decades of military government.

But the delay is also not a first: in 2011, the date of general elections was pushed back twice, and notably even after voting had started.

Yakubu's predecessor as INEC chairman made the "emergency" decision after it emerged that many polling units had no election materials.

Violence that erupted after the election, which was won by Goodluck Jonathan, of the Peoples Democratic Party (PDP), killed more than 1,000 across the country.

In 2015, a six-week delay was announced one week before the scheduled vote. INEC said it acted on military advice because of fighting against Boko Haram in the northeast.

It said there was an "increasing tendency to postpone elections... over the years" and that it would look at taking legal action against those responsible.

There have been calls online for Yakubu to resign as INEC chairman but SERAP deputy director Kolawole Oluwadare said that was a "blatant attempt by politicians to scapegoat the electoral commission" rather than the root causes.

In 2011, leading human rights lawyer Femi Falana said of that year's delay: "It is frustrating and disappointing. This is evidence of the collapse of state institutions."