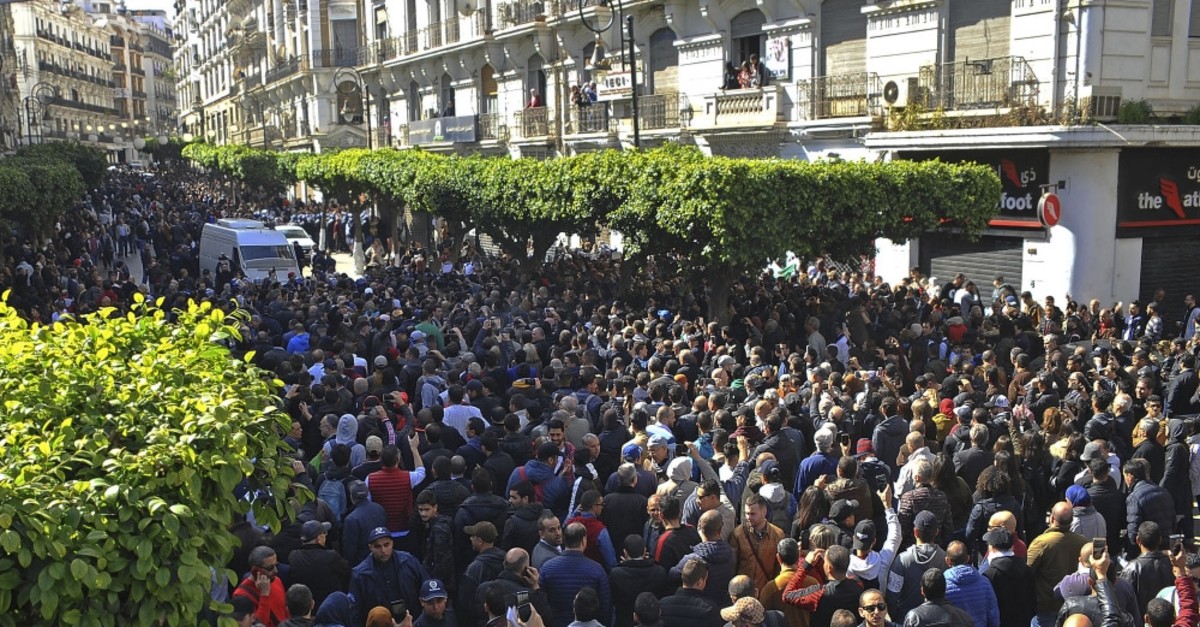 Demonstrators gather during a protest to denounce President Abdelaziz Bouteflika's bid for a fifth term, Algiers, Feb. 24, 2019.
by Yusuf Selman İnanç Feb 26, 2019 12:07 am

Thousands of Algerians have taken to the streets to demand that Abdelaziz Bouteflika not run for president again, with economic issues the main reason for the upheaval

Algeria is witnessing fierce protests against Algerian President Abdelaziz Bouteflika's bid for a fifth presidential term despite his clear physical problems and age.

Thousands of Algerians have protested the decision in the past few days and participation in the rallies has gradually increased. Algerians fear that in case the police or military use excessive force, the protests may turn deadly. Just before the ailing president left the country for Switzerland for a medical appointment, protesters gathered in the Algerian capital chanting slogans against his candidature and asking for a change in the country's politics.

However, the police responded with water cannons and tear gas against the crowd, which was made up of mostly young people.

The protesters are demanding for a change in leadership as the country has been encircled with economic and political problems. According to the Heritage Foundation's economy index, the Algerian economy is ranked at number 171 in the world. While statism continues to dominate politics with some small changes since independence from France in 1962, free market policies for ameliorating the economy or meeting the needs of people remain limited.

"Efforts to introduce economic reforms have been stymied by powerful vested interests; as a result, the government has made little progress in improving fiscal governance, has halted the privatization of state-owned industries, and has restricted imports and foreign engagement in its economy. These policies and other institutional weaknesses, combined with ongoing political uncertainty, continue to undermine prospects for sustained long-term economic development," read the Heritage Foundation's report.

Moreover, the global decrease in oil prices has hampered the country's economy as oil is one of its main sources of revenue. In line with decreasing oil prices and a worsening economy the unemployment rate has significantly increased in the last few years.

Bouteflika, who has been ruling the country since 1999, had a stroke in 2013 and since then he has not appeared in public. His speeches are read out by the ruling party's officials.

Protesters believe that Bouteflika is not physically capable of fulfilling his duties as president. However, officials from the ruling party, the National Liberation Front (FLN), claim that the president is mentally strong enough to continue his duty.

Underlining that continuity is the best option for Algeria, FLN leader Moad Bouchareb said, "To those who are dreaming of change I say 'Have nice dreams.'"

People fear that the country may be dragged into new conflict and unrest, with memories of the decade-long civil war still fresh. From 1991 to 2000, the war claimed at least 200,000 lives. A similar fear was experienced during the Arab Spring when thousands of Algerians took to the streets with demands similar to those voiced today. Although three North African countries – Libya, Morocco and Tunisia – witnessed a change of regime, Algeria handled the situation and maintained the same leadership.