Algeria's Bouteflika pledges not to serve full term if re-elected 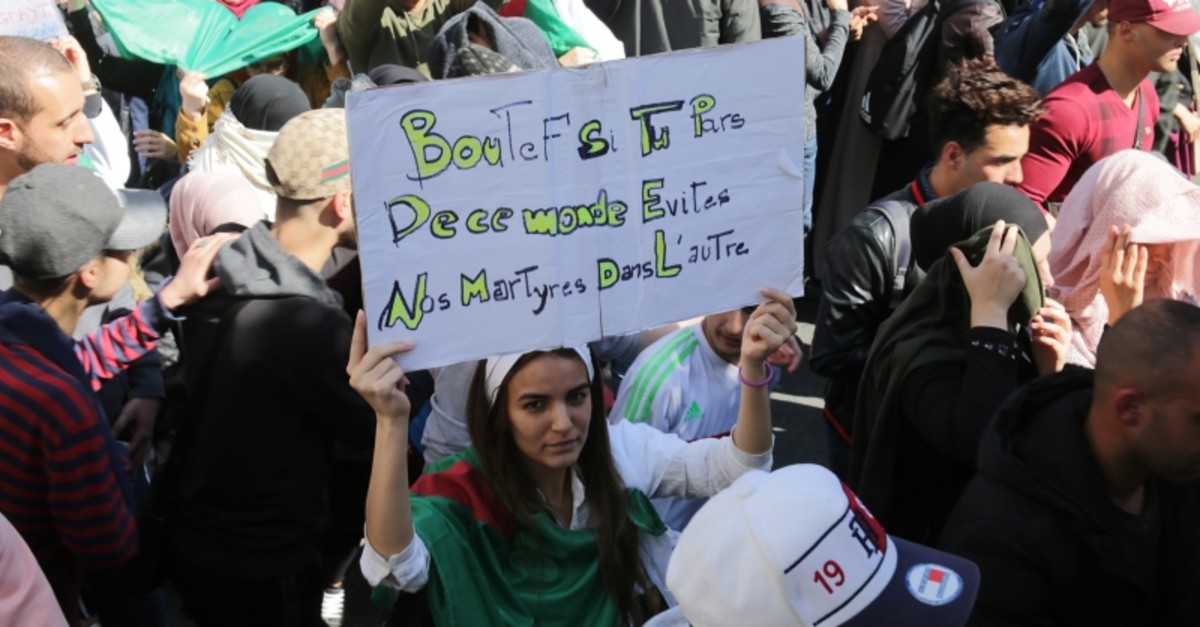 Algeria's ailing president said Sunday that if he wins a fifth term in April, he would promote political changes that his critics have demanded and call an early presidential election in which he would not run.

In a written message to the nation, President Abdelaziz Bouteflika said if he is re-elected April 18, he would organize a public referendum on a new Constitution and respond to an opposition demand for an independent electoral commission.

The longtime leader also vowed to immediately call a "national conference" to set a date and prepare for another presidential election. Bouteflika's decision to run next month has prompted rare, massive protests in recent days.

"I have heard the pleas of protesters and especially thousands of young people who asked about our nation's future," he wrote in his public message.

Hundreds of students staged new protests Sunday in the Algerian capital and other cities against a fifth term for Bouteflika.

Bouteflika, who has been in power since 1999, has used a wheelchair since suffering a stroke in 2013 and is rarely seen in public.

Chanting "Bouteflika go away," protesters rallied near the main city center campus of the University of Algiers, cordoned off by police, AFP journalists said.

Hundreds more students held rallies at campuses across Algiers, including at the Faculty of Law near the headquarters of the Constitutional Council.

Police fired water cannon to prevent protesters from reaching the Council, where candidates must register for the presidential race, security sources said.

Rallies inside and outside campuses in the northeastern city of Annaba also drew hundreds chanting "anti-Bouteflika" slogans, a local journalist said on condition of anonymity.

The TSA news website reported other protests in Algeria's second and third cities, Oran and Constantine, as well as in Bouira, Skida and Gelma in the east and Tiaret and Mostaganem in the southwest.

"Out out," shouted crowds in central Paris, where protesters waved placards and some wrapped themselves in Algerian flags.

Bouteflika has remained silent on the demonstrations since they broke out last month. The 82-year-old flew to Switzerland on Feb. 24 for what his office described as "routine medical checks."

The presidency has not detailed when he will return from the Geneva hospital, which was calm when AFP visited on Sunday.

Although the president's office earlier had said Bouteflika intended to run again, his candidacy wasn't formal until Sunday.

Bouteflika's campaign chief, Abdelghani Zaalane, filed the president's candidacy papers Sunday at the Constitutional Council in Algiers, the country's capital. Hundreds of students took to the streets to denounce the new bid.

About 10 vans transported Bouteflika's documents to the building, according to an Associated Press reporter at the scene.

Elevated security measures were in place in Algeria's capital and especially around the Constitutional Council. Sunday was the deadline for candidates to the April 18 presidential election to file their documents.

Sellal was removed ahead of a deadline of midnight (2300 GMT) Sunday for contenders to register for the April 18 election, and replaced by Transport Minister Zaalene.

The sacking of Sellal came after more than a week of demonstrations by Algerians, including lawyers and students, in Algiers, where protests have officially been banned since 2001, and other cities.

The first major protest drew tens of thousands on Feb. 22 with demonstrators chanting "No fifth mandate."

The scale of the protests has surprised many in Algeria and represents the biggest challenge in years to the authorities.

On Friday, clashes erupted between police and protesters in Algiers as tens of thousands of people took to the streets.

Riot police used tear gas and batons to keep some protesters from marching on the Government Palace which houses the prime minister's office.

According to a police toll, 56 police officers and seven demonstrators were hurt and 45 alleged stone-throwers were arrested in Algiers.

Bouteflika has been in power for two decades, gaining respect from many for his role in ending a civil war in the 1990s that officials say killed nearly 200,000 people.

Officials have warned that the protests risk dragging Algeria into instability, comparing the rallies to those that sparked Syria's war.

Protesters have been mobilized by calls on social media which have resonated with young Algerians, many of whom struggle to find jobs in a country where half the population is under 30.

Reporters at state radio have complained that their bosses have imposed a blackout on coverage of the demonstrations, and last week journalists also took to the streets to protest against alleged censorship.