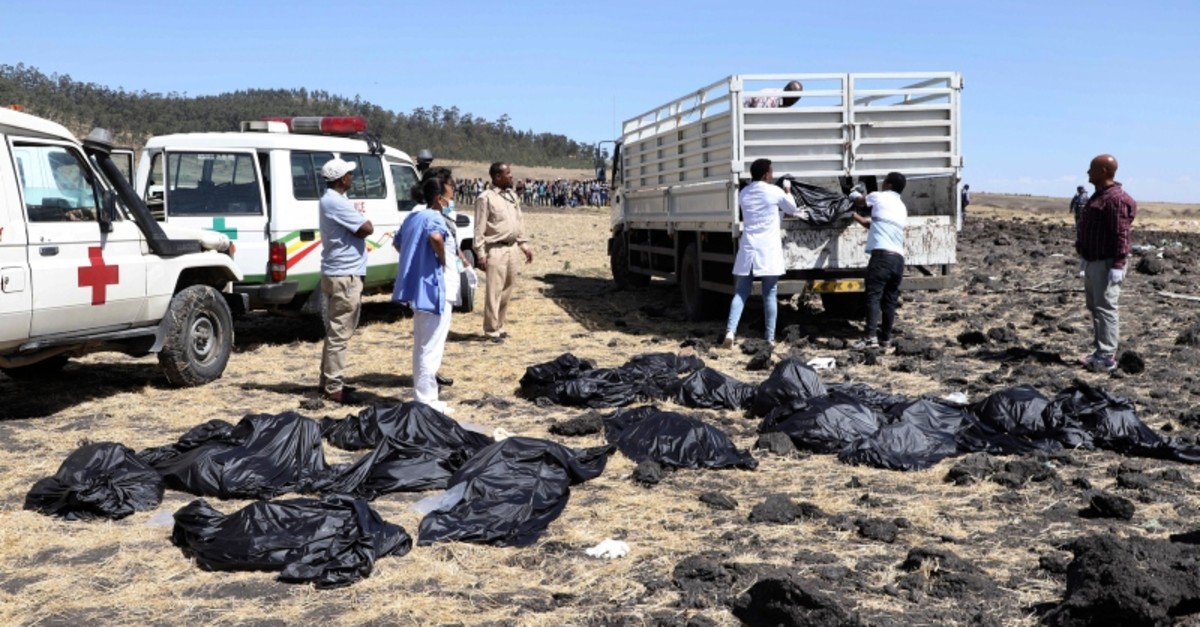 Rescuers remove body bags from the scene of an Ethiopian Airlines flight that crashed shortly after takeoff at Hejere near Bishoftu, or Debre Zeit, some 50 kilometers (31 miles) south of Addis Ababa, in Ethiopia Sunday, March 10, 2019. (AP Photo)
by Compiled from Wire Services Mar 10, 2019 11:45 am

"We hereby confirm that our scheduled flight ET 302 from Addis Ababa to Nairobi was involved in accident today," the airline said in a statement, later confirming a report by Ethiopia's FANA Broadcasting Corp that there were no survivors. "It is believed that there were 149 passengers and eight crew on board the flight," it said.

A list issued by the airline shows 35 nationalities among the dead after the plane crashed shortly after takeoff from Addis Ababa en route to Nairobi on Sunday morning.

Thirty-two Kenyas and 18 Canadians were on board. Nine Ethiopians were killed and eight each from China, Italy and the United States. Seven from France and the U.K. each, six from Egypt and five from Germany were killed.

Four Indians and four Slovakians were killed and three each from Russia, Austria and Sweden. Spain, Israel, Morocco and Poland each lost two citizens.

State-owned Ethiopian Airlines, Africa's largest carrier, said the plane had taken off from Bole International Airport and "lost contact" six minutes later near Bishoftu, a town some 60 kilometers southeast of Addis Ababa by road. The weather in the capital, according to an Agence France-Presse (AFP) reporter, was clear when the brand new Boeing plane, delivered to Ethiopia last year, plane took off. The Boeing came down near the village of Tulu Fara outside Bishoftu.

Records show that the plane was new. The Planespotters civil aviation database shows that the Boeing 737-8 MAX was delivered to Ethiopian Airlines in mid-November.

The crash came on the eve of a major assembly in Nairobi of the U.N. Environment Program, but that agency did not say whether any delegates were on the plane.

"The House of People's Representatives have declared March 11, 2019, a national day of mourning for citizens of all countries that have passed in this tragic accident," the office of Ethiopia's Prime Minister Abiy Ahmed said on Twitter on Sunday.

African Union commission chief Moussa Faki Mahamat spoke of "utter shock and immense sadness," while Ethiopian Prime Minister Abiy Ahmed's office tweeted it "would like to express its deepest condolences to the families of those that have lost their loved ones."

Kenya's President Uhuru Kenyatta said he was "saddened" by the news and Mahboub Maalim, executive secretary of the IGAD East African bloc, said the region and the world were in mourning.

"I cannot seem to find words comforting enough to the families and friends of those who might have lost their lives in this tragedy," Maalim said in a statement.

The plane's manufacturer, U.S. giant Boeing, said it was "deeply saddened to learn of the passing of the passengers and crew on Ethiopian Airlines Flight 302.

"We extend our heartfelt sympathies to the families and loved ones of the passengers and crew on board and stand ready to support the Ethiopian Airlines team."

At least a dozen people affiliated with the United Nations were among those killed in the crash, a U.N. source said.

"It is expected that a least a dozen of the victims were affiliated with the U.N.," the source said, adding that freelance interpreters traveling to a U.N. conference on the environment might also be among the dead.

Canada's foreign minister on Sunday deplored the "terrible news" that 18 Canadian nationals were among the 157 people killed in the crash.

"Terrible news from Addis Ababa this morning," Foreign Minister Chrystia Freeland said on Twitter. "My heartfelt condolences to all those who have lost loved ones."

She said the Ottawa government was in "close contact" with Ethiopian authorities to gather more information.

Turkey on Sunday extended condolences to the families of the victims of those who lost their lives.

"We have received the news with great sorrow that the plane flying from Ethiopian capital Addis Ababa to Kenyan capital Nairobi crashed this morning with its 157 passengers and crew on board," Turkish Foreign Ministry said in a written statement.

The ministry wished God's mercy upon the victims of the "tragic accident" and conveyed condolences to their relatives and the brotherly people of Ethiopia.

GebreMariam said the plane had flown in from Johannesburg early Sunday, and spent three hours in Addis before it was "despatched with no remark," meaning no problems were flagged.

It "underwent rigorous first check maintenance" on Feb. 4, tweeted the airline, which changed its logo on Twitter to black and white from its trademark green, yellow, and red.

Asked if the pilot had made a distress call, the CEO said "the pilot mentioned that he had difficulties and he wants to return. He was given clearance" to turn around.

The senior captain, Yared Getachew, had some 8,000 flight hours under his belt.

Ethiopian and American investigators will probe the crash, said GebreMariam.

The Boeing 737-800 MAX is the same type of plane as the Indonesian Lion Air jet that crashed last October, 13 minutes after takeoff from Jakarta, killing all 189 people on board. The cockpit data recorder showed that the jet's airspeed indicator had malfunctioned on its last four flights, though Lion Air initially claimed that problems with the aircraft had been fixed.

The last deadly crash of an Ethiopian Airlines passenger plane was in 2010, when the plane crashed minutes after takeoff from Beirut killing all 90 people on board.

Sunday's crash comes as the country's reformist prime minister, Abiy Ahmed, has vowed to open up the airline and other sectors to foreign investment in a major transformation of the state-centered economy. Ethiopian Airlines has been expanding assertively, recently opening a route to Moscow and in January inaugurating a new passenger terminal in Addis Ababa to triple capacity. Speaking at the inauguration, the prime minister challenged the airline to build a new "Airport City" terminal in Bishoftu, where yesterday's crash occurred.