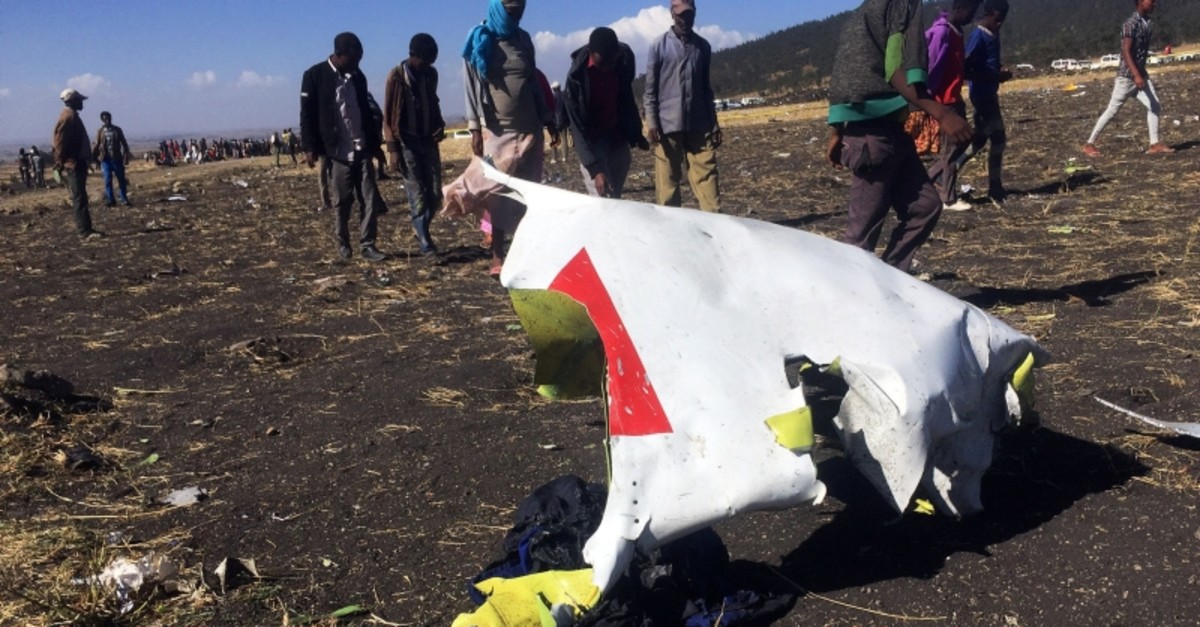 People walk past a part of the wreckage at the scene of the Ethiopian Airlines Flight ET 302 plane crash, near the town of Bishoftu, southeast of Addis Ababa, Ethiopia March 10, 2019. (Reuters Photo)
by Compiled from Wire Services Mar 12, 2019 11:20 am

U.S. aviation experts on Tuesday joined the investigation into the crash of an Ethiopian Airlines jetliner that killed 157 people, as questions grow about the new Boeing plane involved in the crash.

The Federal Aviation Administration arrived at the crash site outside the capital, Addis Ababa, with representatives from the National Transportation Safety Board. They join an Ethiopian-led investigation.

The FAA said Monday it was ordering Boeing to improve anti-stalling software and the model's maneuvering system, suspected of contributing to the deadly crash of another new Boeing 737 Max 8 in October, giving the company until the end of April to make the updates. The FAA is also requiring Boeing to update training requirements and related flight crew manuals.

But the body ruled out grounding the fleet for now. It said investigations had "just begun" and so far no data had been provided to "draw any conclusions or take any actions."

"If we identify an issue that affects safety, the FAA will take immediate and appropriate action," it said in a statement.

Boeing has said it has no reason to pull the popular aircraft from the skies.

The Ethiopian Airlines plane crashed in clear weather six minutes of taking off for Nairobi, and a growing number of countries and airlines have grounded the new Boeing model as a result.

Singapore and Australia Tuesday banned the use of the high-tech jet in its airspace, becoming the latest in a growing list of jurisdictions worried about the safety of the flagship plane.

One witness has told The Associated Press that smoke was coming from the plane's rear before it crashed in a rural field. "The plane rotated two times in the air, and it had some smoke coming from the back then, it hit the ground and exploded," Tamrat Abera said.

Investigators on Monday found the jetliner's two flight recorders from the Ethiopian Airlines plane, which went down near Addis Ababa, and was carrying passengers and crew from 35 countries, including some two dozen U.N. staff.

An airline official, however, said one recorder was partially damaged and "we will see what we can retrieve from it." The official spoke on condition of anonymity for lack of authorization to speak to the media.

Safety experts have cautioned against drawing too many comparisons too soon with the Lion Air crash of the same model last year that killed 189 people.

On Tuesday, Australia's civil aviation safety authority suspended Boeing 737 Max 8 aircraft from flying to or from Australia, and Singapore regulators announced that all types of Max aircraft were banned from its airspace. A South Korean airline, Eastar Jet, said it will suspend operations of its two Boeing 737 Max 8 planes.

"This is a temporary suspension while we wait for more information to review the safety risks of continued operations of the Boeing 737 Max to and from Australia," Australia's Civil Aviation Safety Authority CEO Shane Carmody said in a statement.

The bans come after China ordered domestic airlines to suspend commercial operations of the Max 8, and Indonesia grounded its entire fleet of the jets for inspections.

Ethiopian Airlines has grounded its remaining Max 8 jets, while airlines in South Africa, Brazil and Mexico have taken theirs out of service and pilots from Argentina's Aerolineas Argentinas are refusing to fly them.

Several airlines have said they are not canceling Max 8 flights, however, while U.S. carriers appear to retain confidence in the manufacturer.

Boeing said it did not intend to issue any new recommendations about the aircraft to its customers. It was sending a technical team to the crash site to help investigators and issued a statement saying it was "deeply saddened to learn of the passing of the passengers and crew" on the jetliner.

Boeing has described the Max series as its fastest-selling family of planes, with more than 5,000 orders placed to date from about 100 customers.

But not since the 1970s – when the McDonnell Douglas DC-10 had successive fatal incidents – has a new model been involved in two deadly accidents in such a short period.

The weekend crash sent Boeing shares nosediving as much as 12 percent on Monday.

The plane involved in Sunday's crash was less than four months old, with Ethiopian Airlines saying it was delivered on Nov. 15.