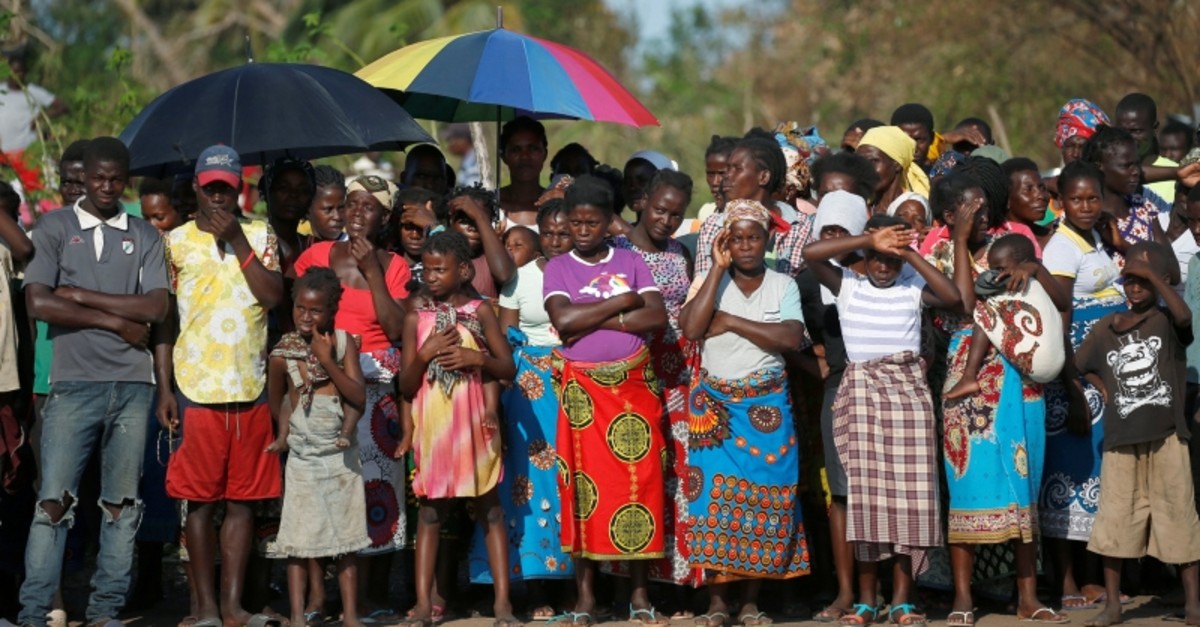 People look on as they wait for food aid in the aftermath of Cyclone Idai in Guara Guara village, near Beira, Mozambique, March 26, 2019. (Reuters Photo)
by Associated Press
Mar 26, 2019 12:00 am
Cyclone-ravaged Mozambique faces a "second disaster" from cholera and other diseases, the World Health Organization warned on Tuesday, while relief operations pressed into rural areas where an unknown number of people remain without aid more than 10 days after the storm.

Some 1.8 million people in Mozambique need urgent help after Cyclone Idai, the United Nations said in an emergency appeal for $282 million for the next three months.

The death toll in Mozambique from the cyclone has risen to 468, according to Mozambican authorities cited by the Portuguese news agency Lusa. There are also 259 dead in Zimbabwe and at least 56 dead in Malawi.

Cyclone Idai was "one of the worst weather-related catastrophes in the history of Africa," U.N. Secretary-General Antonio Guterres told reporters in New York. He raised the specter of hunger, saying the storm inundated Mozambique's breadbasket on the eve of harvest.

The death toll remained at least 761 in Mozambique, Zimbabwe and Malawi, and authorities have warned it is "very preliminary." More bodies will be found as floodwaters drain away.

Emergency responders raced to contain deadly diseases such as cholera, which authorities have said will break out as more than a quarter-million displaced people shelter in camps with little or no clear water and sanitation. Many wells were contaminated by the floods.

People are living in tent camps, schools, churches, roads and other impromptu places on higher ground. Many have little but their clothes, squatting over cooking fires and picking their way around stretches of increasingly dirty water or simply walking through it, resigned.

The World Health Organization said it is expecting a "spike" in malaria cases in Mozambique. The disease-carrying mosquitoes breed in standing water.

WHO also said 900,000 oral cholera vaccines were expected to arrive later this week. Cholera is caused by eating contaminated food or drinking water and can kill within hours. Cases of diarrhea have been reported.

"We must not let these people suffer a second disaster through a serious disease outbreak or inability to access essential health services. They have suffered enough," Dr. Djamila Cabral, the WHO Representative in Mozambique, told reporters in Geneva.

She said people in camps were living in "horrific conditions" and that about 55 health centers had been severely damaged.

"Surely when people are in a crowded place they are all vulnerable, they face difficulties such as urination and defecation," Jose Pedro told The Associated Press in Beira. "So the spreading of diseases such as cholera is easy."

There were similar concerns in southern Malawi. In the Bangula camp in Nsanje district, about 5,000 people have just a few toilets.

The toilets "are very shallow and some are already full because the area is still waterlogged," said Joseph Moyo with the Oxfam aid group.

Humanitarian assistance continued to arrive, including much-needed air support. The World Food Program received $280,000 from the European Union to support the deployment of a U.N. Humanitarian Air Service helicopter that will deliver assistance to the two worst-hit districts in Zimbabwe, Chimanimani and Chipinge.

The United States said it had donated nearly $3.4 million in emergency food assistance to the World Food Program, whose director was touring Beira on Tuesday.

A field hospital was being set up in Beira and another is arriving later this week, the International Federation of Red Cross and Red Crescent Societies said. A sanitation system to serve some 22,000 people has arrived and a water purification unit to serve some 25,000 people is expected to arrive on Wednesday, the organization said.

"Honestly I am distressed there is still a lot of work to be done in terms of providing the assistance proportional" to the number of people, former Mozambican first lady Graca Machel said in Beira.

Bit by bit, the scale of the destruction became clearer. The cyclone reportedly destroyed all houses in the village of Metuchira, home to nearly 38,000 people, the U.N. humanitarian agency said.

Amid the relief efforts, grieving people in Mozambique struggled to bury the dead. "Efforts are underway to improve management of dead bodies, as mortuary facilities were either destroyed and/or lack enough facilities and capacity," the U.N. humanitarian agency said.