Growing number of Algerian protesters call for Bouteflika to step down 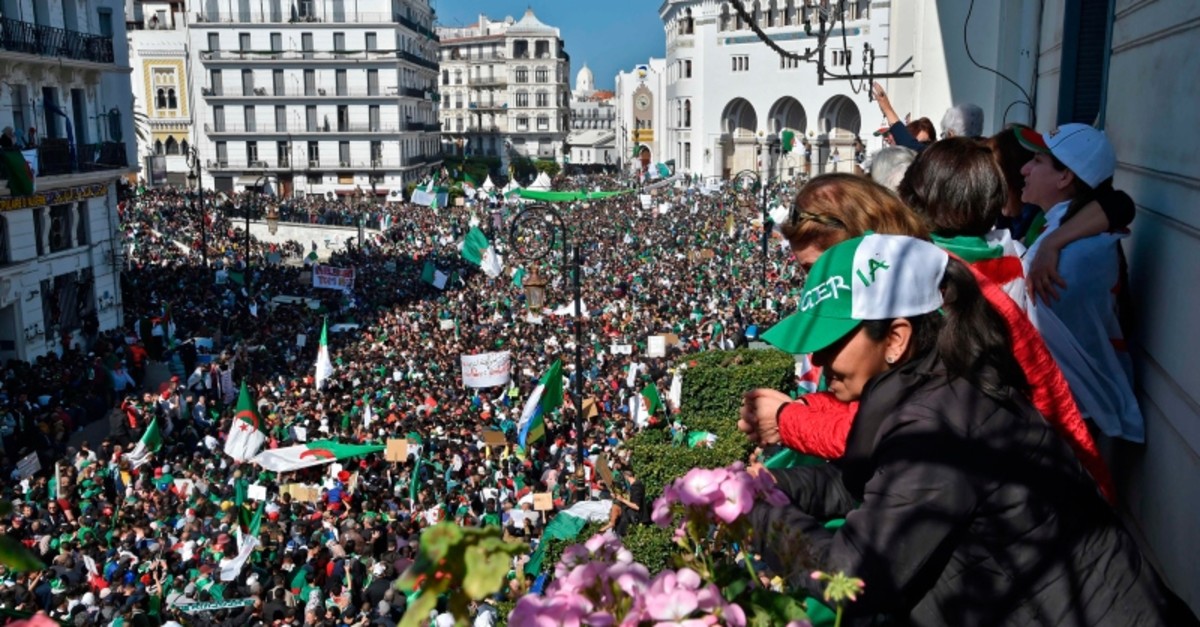 Algerians look down from a balcony upon protesters gathering during a mass demonstration against ailing President Abdelaziz Bouteflika in the capital Algiers on March 29, 2019. (AFP Photo)
by Compiled from Wire Services Mar 29, 2019 12:00 am

Rallies were expected to take place across the North African country, where protests broke out more than a month ago when Bouteflika announced his bid for a fifth term.

Demonstrators turned out in huge numbers despite a succession of loyalists deserting the president and calling for him to step down and make way for a government-led change of leadership.

About one million people took to the streets of Algiers on Friday to demand the resignation of Bouteflika, police officers at the scene told Reuters, in the biggest demonstration since unrest erupted six weeks ago.

Activists angrily rejected those moves as desperate bids by key figures in Bouteflika's entourage to salvage their own grip on power and demanded that they too quit.

"Bouteflika you go, take Gaid Salah with you," and "FLN out" protesters shouted, referring to the armed forces chief of staff and the president's party.

From the early hours of Friday crowds of demonstrators, many of them young but also including army veterans of Algeria's 1990s civil war, packed the square outside the capital's main post office, which has become the epicenter of protests.

"We're fed up with those in power," the demonstrators chanted. "We want a new government".

Some waved the green, white and red Algerian flag or draped it over their shoulders, while others held banners with slogans and cartoons.

Some made lengthy journeys to take part in the protest.

"We're here to issue a final appeal to those in power: 'Take your bags and go'," said Amin, a 45-year-old who travelled to the capital from the port of Bejaia, nearly 200 kilometers (125 miles) away.

Earlier this month, 82-year-old Bouteflika, who uses a wheelchair and has rarely been seen in public since suffering a stroke in 2013, said he would not stand for re-election -- but also postponed the April vote.

His move angered Algerians who saw it as a ploy by those around him to extend his two decades in power. Tens of thousands again took to the streets demanding his immediate ouster.

Faced with persistent public anger, a succession of veteran Bouteflika loyalists deserted the president this week.

On Tuesday, Chief of Staff General Ahmed Gaid Salah, who was appointed by Bouteflika in 2004, called for him to step down or be declared medically unfit.

The chief of staff on Tuesday cited Article 102 of the constitution, under which a president can be removed if found unfit to rule.

Long a faithful Bouteflika supporter, Gaid Salah said on television it was "imperative" to find a way out of the crisis "which responds to the legitimate demands" of the people in line with the constitution.

Article 102 of Algeria's charter empowers the Constitutional Council to determine if the president is unable to do his job due to a serious or enduring illness, and asks parliament to declare him unfit. In this case, head of parliament's upper house, Abdelkader Bensaleh, would serve as interim president for 45 days.

However, the opposition believes the enforcement of the article is not sufficient to ensure a democratic transition and fair elections.

On Wednesday, Bouteflika's longtime coalition partner, the National Rally for Democracy (RND) of former Prime Minister Ahmed Ouyahia, also called for him to step down.

The RND said it "recommends the resignation of the president... with the aim of smoothing the period of transition," in a statement signed by its leader Ouyahia.

A longtime supporter of the veteran president, the unpopular Ouyahia served as Bouteflika's prime minister three times since 2003 before being sacrificed on March 11 in a vain bid to calm the intensifying protests.

Applying Article 102 would constitute "the legal framework capable of overcoming the political crisis facing our country," he said.

Thursday saw the resignation of the president of Algeria's Business Leaders Forum, Ali Hadad, widely seen as a political tool of Bouteflika who had come under harsh criticism from protesters.

But the idea of Bouteflika's inner circle retaining their grip on power through a substitute leader drew short shrift from Friday's protesters.

Some chose humor to convey their rejection of the call for a government-led transition under Article 102.

"102 -- that number is out of service," said one placard held up by the crowd outside the main post office and telephone exchange. "Please call the people."

Others raised a banner saying: "We demand the implementation of Article 2019: All of you go."

"The way out is for Bouteflika to resign and for a transitional period to be run by another man than Bensaleh, who is part of the present regime," a protester in Algiers said.

"Those who have ruled Algeria over the past years and plundered public money will bow to the people's demands despite their attempt to cling to power," rights activist Abdel-Ghani Badi told dpa.

The protesters, some cloaked in the national flag, chanted against the ruling elite: "You leave means you leave."
Last Update: Mar 29, 2019 7:05 pm
RELATED TOPICS