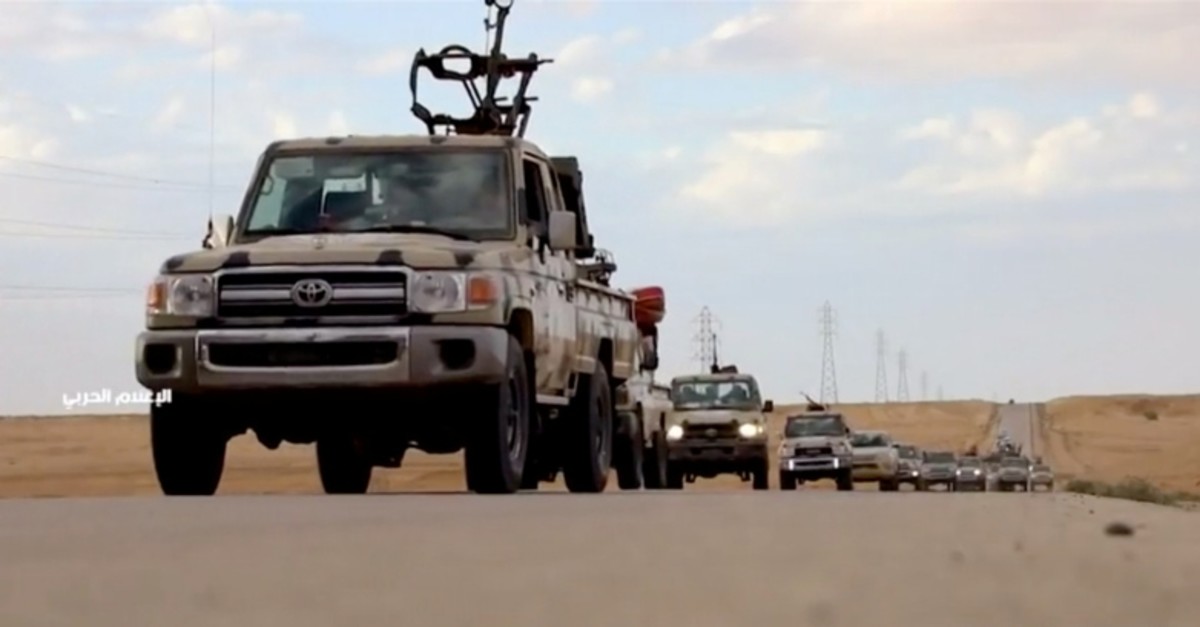 Pickup trucks with mounted weapons drive on a road in Libya, April 4, 2019, in this still image taken from video. (Reuters TV via REUTERS)
by Compiled from Wire Services Apr 04, 2019 8:02 pm

Libyan army commander Khalifa Haftar on Thursday ordered his forces to march on Tripoli, the capital of the U.N.-backed government, sparking fears of a major showdown with rival militias hours after U.N. chief Antonio Guterres urged calm and restraint in the strife-torn country.

The order posted in an audio recording online came as Secretary-General Guterres visited the North African country and expressed fears of new confrontations.

Haftar, who commands the so-called Libya National Army based in the east, described his forces' move as a "victorious march" to "shake the lands under the feet of the unjust bunch."

"Today we respond to the call of our people in our dear capital as we have promised them," Haftar said.

Haftar urged his forces to enter the city peacefully, ensure the safety of local and foreign residents as well as state institutions and only raise their weapons "in the face of those who seek injustice and prefer confrontation and fighting."

He also urged his forces not to open fire on any civilians or those who are unarmed.

"Those who lay down their weapons are safe, and those who raise the white banner are safe," he said.

Tripoli is under the control of a weak U.N.-backed government and aligned militias, which are rival to the east-based administration and Hifter's army.

Tripoli-based Interior Ministry linked to the Prime Minister Fayez Serraj vowed to stand firm against what it called "any attempts to threaten security" in Tripoli.

Haftar's message, which was posted on the Facebook page of the army's media office, comes a day after his forces edged closer to Tripoli and took over the town of Gharyan, 50 kilometers (31 miles) from Tripoli without much fighting.

The announcement of an initiative on Tripoli comes days before a U.N.-brokered conference aimed at bridging the gap among Libya's factions to draw a road map for new elections and end the country's split.

Guterres is the second U.N. chief to visit Libya since the 2011 uprising that toppled and later killed Libya's long-time ruler Moammar Gadhafi. Ban Ki-moon visited in October 2014. Libya, the oil-rich North African country, fell in series of civil wars in different towns and cities, where heavily armed militias fought over power and oil.

Guterres, who was to hold a news conference in Tripoli later on Thursday, said on Twitter that he is "deeply concerned by the military movement taking place in Libya and the risk of confrontation."

"There is no military solution," he said. "Only intra-Libyan dialogue can solve Libyan problems."

Gharyan is the closest Haftar's forces have made it to Tripoli.

"I am sipping coffee now in Gharyan," Haftar's top aide Abdel-Salam al-Hassi told The Associated Press over the phone. "God willing, we will enter the rest of the cities without clashes."

Skirmishes were reported overnight in the mountain district of al-Assabaah, near Gharyan, in which two people — a resident and a militiaman — were killed, according to the media office of Haftar's forces.

The European Union's mission to Libya on Thursday also expressed concern over "the military buildup underway in Libya and the escalatory rhetoric which seriously risks leading to an uncontrollable confrontation."

Haftar's army has spread its footprint from eastern Libya where it first battled mostly extremist and terrorist groups, starting in 2014. The campaign then extended southward as Hifter's forces took control of key towns and border crossings earlier this year and now is pushing west, toward Tripoli.

Haftar, who is backed by Egypt and Gulf Arab nations such as the United Arab Emirates, has labeled his rivals as "terrorists" and said in more than one occasion that "liberating" Tripoli is his ultimate goal.

Libya has been in turmoil since the NATO-backed ouster of Gadhafi in 2011. The oil-rich country has at least two rival administrations: one based in Tripoli and the other in the eastern city of Tobruk, which is allied with Haftar.

Rising tensions between the two competing governments come ahead of a U.N.-organized national reconciliation conference due to be held in Libya later this month.

The meeting, which will convene in the Libyan desert town of Ghadames on April 14-16, is aimed at outlining a plan for achieving peace for the country, including setting a date for holding long-delayed elections.

The ongoing military operation also comes less than five weeks after Haftar and Serraj met in Abu Dhabi, where they agreed to hold elections to end the crisis in the country.

Last year, the UN said the long-delayed elections should take place sometime in 2019.