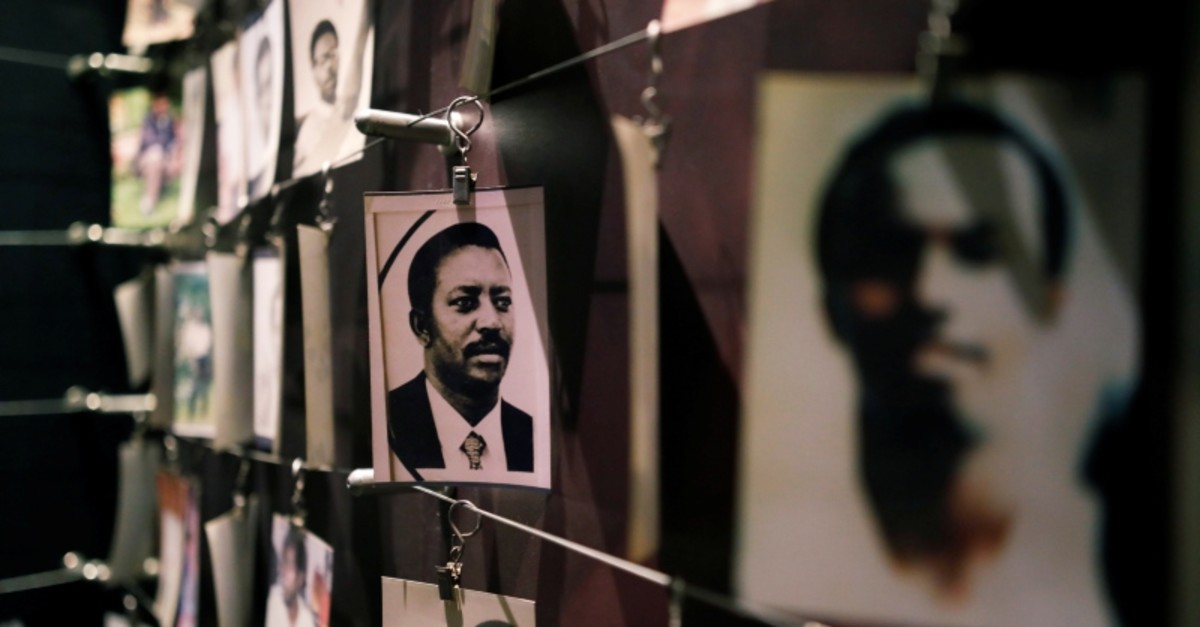 Pictures of the Rwandan Genocide victims donated by survivors are displayed at an exhibition at the Genocide Memorial in Gisozi in Kigali, Rwanda April 6, 2019. (Reuters Photo)
by Compiled from Wire Services Apr 08, 2019 10:45 am

Rwandans gathered on Sunday to begin a solemn commemoration of the lives of 800,000 Tutsi and moderate Hutus murdered during the Rwandan genocide, a three-month-killing spree that began 25 years ago.

The ceremony marks the beginning of a week of events to honor the dead. Rwandan President Paul Kagame is scheduled to lay a wreath at Gisozi genocide memorial site, where over a quarter a million of people are buried.

"Remembering is necessary because it's only thanks to looking back at what happened (that we can) ensure that it never happens again," said hairdresser Olive Muhorakeye, 26, who survived the genocide.

In the afternoon, officials will join around 2,000 people in a "walk to remember" from parliament to the national soccer stadium, where candles will be lit in a night vigil.

Meanwhile, French President Emmanuel Macron wants to declare April 7 as a national day of commemoration of the Rwandan genocide, his Elysee office said in a statement on Sunday.

The presidency made the announcement as the Rwandan government started commemorations marking the 25th anniversary of the genocide against Tutsi and moderate Hutus, raising the curtain on a three-month remembrance period.

The French president will not attend official commemorations of the massacre on Sunday. He will be represented by Hervé Berville, a Tutsi survivor of the genocide who is a member of French parliament from Macron's ruling party.

Rwandan President Paul Kagame repeatedly accused Paris of being complicit in the bloodshed.

The statement on Sunday did not give further details on how the anniversary would be marked in France. French high schools will start teaching the Rwandan genocide from September 2020.

The 100 days of slaughter began on April 6, 1994, after President Juvenal Habyarimana and his counterpart Cyprien Ntaryamira of Burundi - both Hutus - were killed when their plane was shot down over the Rwandan capital. The attackers have never been identified.

The attack mobilized Hutu government soldiers and allied extremist militia, who orchestrated the genocide to exterminate the Tutsi minority.

In villages across the densely populated country, neighbor turned on neighbor as men, women and children were hacked to death, burned alive, clubbed and shot.

The fighting ended in July 1994 when the Rwandan Patriotic Front (RPF), a Tutsi-led rebel movement led by Kagame, swept in from Uganda and seized control of the country.

Official policy is to strongly discourage any talk of ethnicity, but the opposition says the tight control of the media and political sphere is also used to stifle dissent.

"The ruling party has decided to adopt dictatorship from early days after the genocide as they said they were protecting the national sovereignty but now I feel that should end," opposition figure Victoire Ingabire told Reuters on the phone.

Kagame, who won nearly 99 percent of the vote in 2017 polls on a 96 percent turnout, rebuffs the criticism, pointing to Rwanda's strong economic growth and relative peace since the genocide.