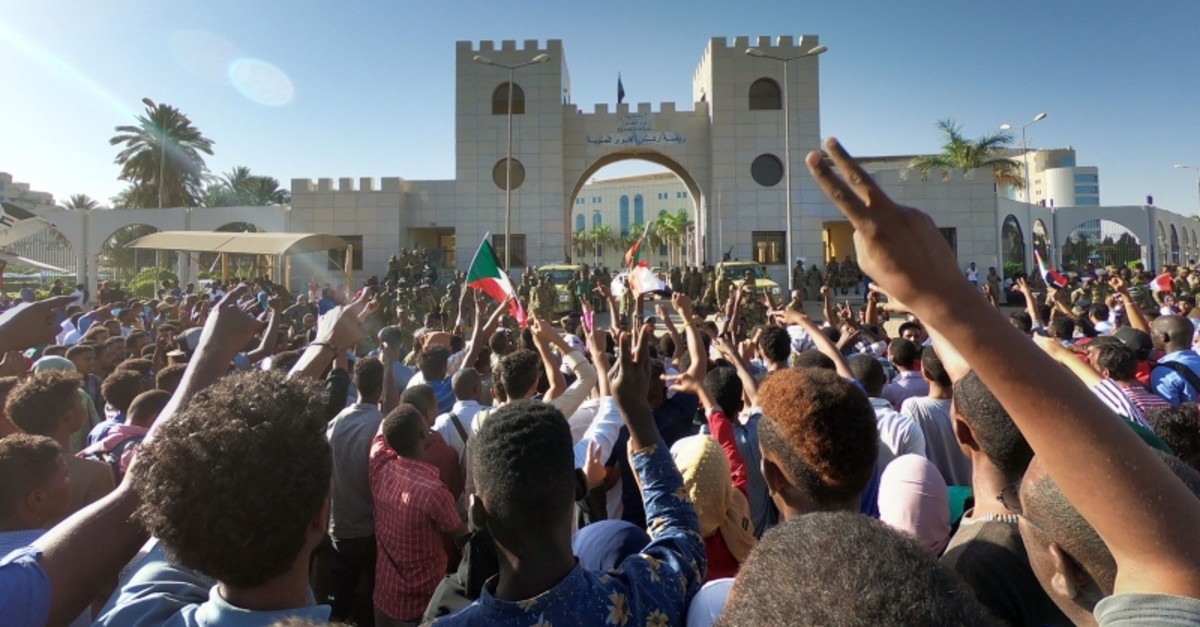 Demonstrators take part in a protest demanding the departure of Sudanese President Omar al-Bashir, outside the military headquarters in the capital Khartoum, Sudan, April 7, 2019. (EPA Photo)
by Compiled from Wire Services Apr 09, 2019 1:12 pm

Activists behind anti-government demonstrations in Sudan said Tuesday that security forces have killed at least seven people, including a military officer, in another attempt to break up a sit-in outside the military headquarters in the capital.

Sarah Abdel-Jaleel, spokeswoman for the Sudanese Professionals Association (SPA), says clashes erupted early on Tuesday between security forces and protesters who have been camping out in front of the complex in Khartoum since the weekend.

The new deaths brought the total number of people killed by the security forces since Saturday to 15.

Abdel-Jaleel says at least 30 protesters were wounded in the violence. A government spokesman didn't respond to calls seeking comment.

The Central Committee of Sudanese Doctors said in a statement that at least two people had been killed and several others injured in the clashes.

Eyewitnesses said government forces had attempted to break a sit-in staged by anti-regime protesters outside the army headquarters.

Another protester who preferred to remain unnamed said the army has allowed hundreds of protesters to enter the headquarters for protection.

On Monday, Interior Minister Bushara Aror had said seven people were killed and 2,496 arrested during anti-government protests over the weekend.

Aror told parliament that 15 civilians had also been injured, as well as 42 members of the security forces, according to state-run news agency SUNA.

The sit-in began after the SPA called for widespread rallies and a march on the army headquarters on Saturday, the 34th anniversary of the 1985 uprising that toppled the then-government of president Gaafar Nimeiry.

The military removed Nimeiry before handing over power to an elected government, which in turn was overthrown by Omar al-Bashir in a coup in 1989.

The East African nation has seen ongoing protests since December 2018, when a sharp hike in bread and fuel prices caused a public outcry that led to calls for an end to President Bashir's 30-year rule.

The oil-rich country's economy was badly affected when it split with South Sudan in 2011, and the government is currently facing an economic crisis while also battling several rebel groups.