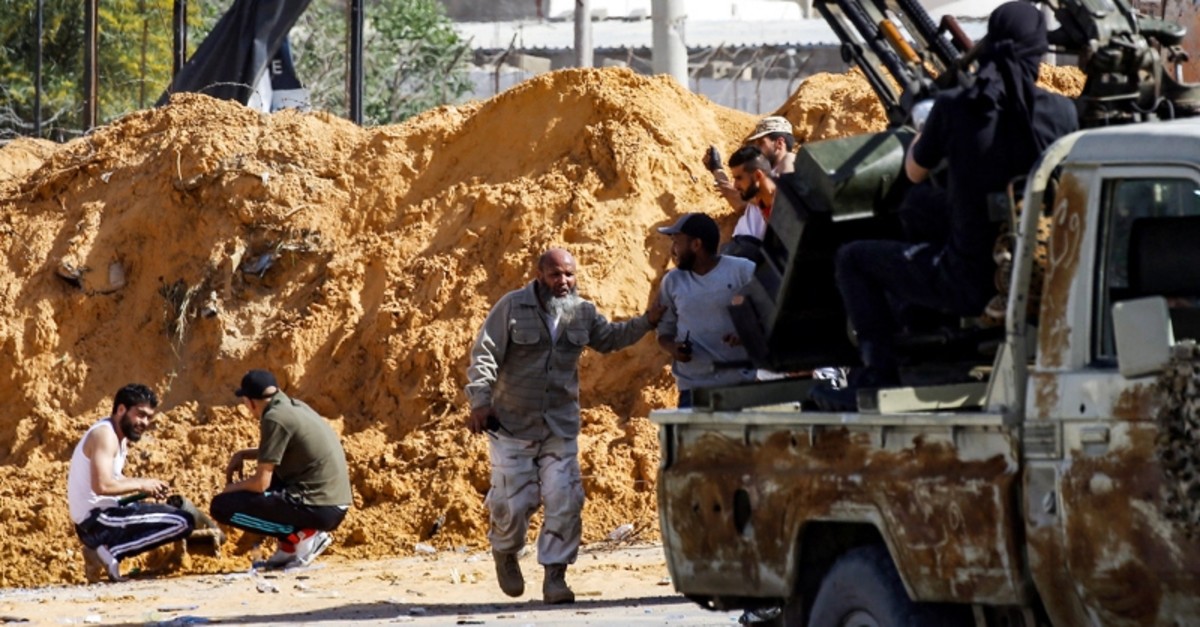 This picture taken on April 10, 2019 from the side of forces loyal to Libya's Government of National Accord (GNA) shows a view of fighters taking cover behind a dirt barrier during clashes south of capital Tripoli's suburb of Ain Zara. (AFP Photo)
by Compiled from Wire Services Apr 10, 2019 10:15 pm

Forces led by Commander Khalifa Haftar on Wednesday claimed to have captured Libya's Yarmuk military camp, south of the capital Tripoli, from the U.N.-backed government.

In a brief statement, the Haftar-led forces said they have set control over the Yarmuk camp, adding they are advancing towards Tripoli's center.

The Yarmuk military camp is located in the Ain Zara area which had been witnessing clashes between the Haftar forces and government forces.

U.N. Secretary-General Antonio Guterres called Wednesday for a cease-fire to prevent all-out fighting for control of Tripoli as the Security Council weighed steps to address the crisis.

"It's still time to stop," Guterres told reporters after briefing the U.N. Security Council in a closed session.

"It's still time for a cease-fire to take place, for a cessation of hostilities to take place, and to avoid the worst, which would be a dramatic, bloody battle for Tripoli."

Guterres said Libya was facing a "very dangerous situation" and urged a halt to the fighting to allow political negotiations to start anew.

The council met for over two hours behind closed doors to consider how to address the fresh fighting near Tripoli that has derailed U.N. peace efforts.

U.N. diplomats said the council was considering a statement or draft resolution demanding the cease-fire.

Libya's Parliament speaker in the east said Wednesday no peace deal can be reached right now between rival factions in his country because Tripoli has been "kidnapped" by armed groups.

Aguila Saleh, speaker of the Tobruk-based House of Representatives, tells The Associated Press on Wednesday in Alexandria, Egypt, that the LNA supporting the rival government in the east has stepped in to "liberate" Tripoli, the seat of the U.N.-backed government.

Saleh says it would be impossible to hold next week's U.N.-planned peace conference.

He says that the Parliament and the LNA are "convinced that an agreement cannot be carried out ... as these groups mess with the capital."

Last week, Haftar announced the launch of a campaign to capture Tripoli. By Monday, however, the campaign appeared to have lost momentum, with pro-government forces recapturing two military bases near Tripoli after they were briefly seized by Haftar's forces.

The two sides have since continued to trade blows over three strategic airports located on the capital's outskirts.

Libya has remained beset by turmoil since 2011, when a bloody NATO-backed uprising led to the ouster and death of President Muammar Gaddafi after four decades in power.

Since then, the country's stark political divisions have yielded two rival seats of power: one in eastern Libya, with which Haftar is associated, and another in Tripoli, where it enjoys U.N.'s support.