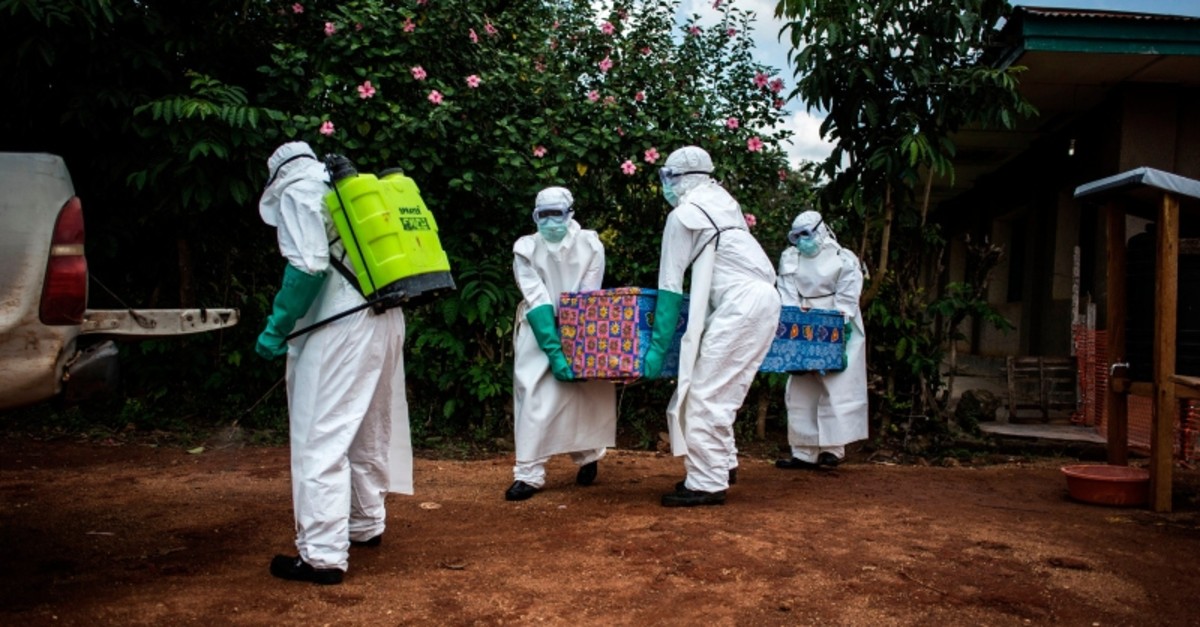 In this file photo taken on August 22, 2018 health workers carry out the body of a patient with unconfirmed Ebola virus in Mangina, near Beni, in the North Kivu province. (AFP Photo)
by Compiled from Wire Services Apr 12, 2019 12:06 pm

The death toll from Ebola in the Democratic Republic of Congo (DRC) has risen to 698 since the start of an outbreak last July, the country's Health Ministry said Thursday.

A total of 43 people died of Ebola in the last four days, according to the ministry.

Among 1,206 cases of reported hemorrhagic fever, 1,140 were confirmed to be Ebola cases.

And 84 people being treated for the disease, while 358 have recovered from the virus.

Some 66 people died following hemorrhagic fever, but it could not be verified whether they died of Ebola.

The Red Cross on Thursday sounded the alarm over Ebola's increasingly rapid spread in Congo.

18 new cases were confirmed on Tuesday alone, the highest single day figure in the eight-month outbreak, the International Federation of Red Cross and Red Crescent Societies (IFRC) said in a statement.

"The bottom line is that Ebola is now spreading faster, and many people are no longer seeking care," IFRC's director of health and care, Emanuele Capobianco, said in a statement.

"It is clear that some vulnerable communities do not trust Ebola responders," he added.

Poor security owing to the presence of several armed groups, coupled with resistance of some communities to seeking treatment, has hampered the fight to stem the spread of the disease.

The DRC declared its tenth outbreak of Ebola in 40 years last August in northeastern North Kivu province before it spread into the neighbouring Ituri region.

The current outbreak is the second worst to date, the deadliest being a 2014 epidemic in West Africa which kileld more than 11,300 people and infected an estimated 28,600 as it swept through Liberia, Guinea and Sierra Leone.

The World Health Organization's emergency committee is due to meet in Geneva on Friday to decide whether the outbreak amounts to "a public health emergency of international concern."

It held off making such a declaration at an initial meeting in October, but concerns have mounted since, notably from Doctors Without Borders, which recently warned that the response was failing to contain the epidemic.

Ebola — a tropical fever which first appeared in 1976 in Sudan and the DRC — can be transmitted to humans from wild animals.

It can also reportedly spread through contact with body fluids, infected persons or of those who have succumbed to the virus.