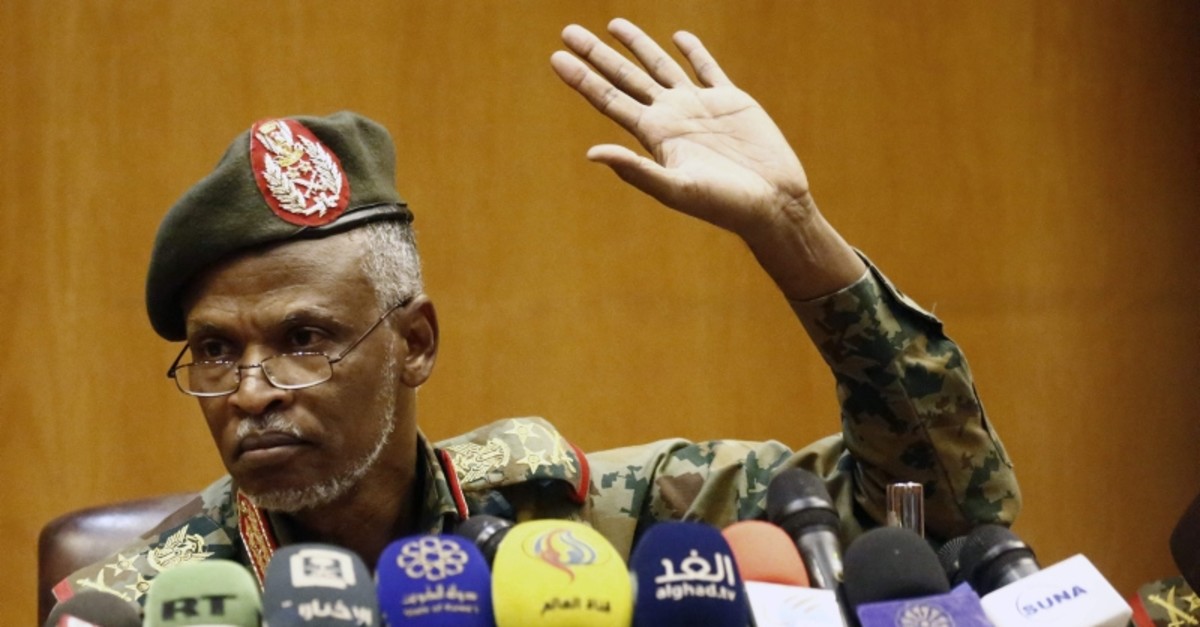 The Sudanese army claims it has no ambition to hold the reins of power for long after ousting President Omar al-Bashir, saying it responded to calls from the people against his rule.

Col. Gen. Omar Zein Abedeen, the chairman of the transitional council that took over on Thursday after al-Bashir was arrested, told a press conference on Friday that the military wants to "guide the country forward" and act as a "tool for change."

"We came for you. We have no ambitions at all to hold the reins of power. We have not come up with future solutions or an ideology, they will be devised by the people," Zein Abedeen said.

The military council's purpose was to facilitate a public conversation between political parties and citizens to find a solution to Sudan's crisis, according to Zein Abedeen. "We are the guardians of the people's change ... We are here to arrive at solutions acceptable and agreeable to the people." The former ruling National Congress Party of al-Bashir will be allowed to compete in planned elections, Zein Abedeen added.

The council's main role was to maintain public order, peace, security and stability during this process, he said. 'There will be civil government to be agreed on by political entities and we will not interfere in it.'

He said al-Bashir is in custody but declined to provide more details. He said al-Bashir's top government members, including the vice president and associates, are also under arrest but didn't elaborate.

Ousted President al-Bashir will not be handed over to International Criminal Court (ICC), where he faces charges of war crimes, crimes against humanity and genocide for his deadly campaign against insurgents in Darfur, Zein Abedeen said, but added that military authorities will try him at home, before the nation.

He said that handing over al-Bashir would be "an ugly mark on Sudan ... even rebels carrying weapons, we won't extradite them."

However, Sudanese pro-democracy protesters who spent four months on the streets rallying against al-Bashir pressed on with their campaign for a civilian government Friday, defying the military leaders who overthrew him the day before.

Thousands kept up their sit-in outside the military headquarters in Khartoum overnight and into the morning, despite a curfew imposed by the army after it arrested al-Bashir.

The soldiers posted outside army headquarters made no move to disperse the protesters who camped out there for a sixth straight night on Thursday, demonstrators said.

Protesters were seen chatting with soldiers. They said their quarrel was with the commanders who had led the coup, not the rank and file.

"There was no difference between last night and previous days and nights for us," said one protester who gave his name as Abu Obeida.

"This is now our square. We have taken it and won't leave until victory is achieved.

"We broke the curfew. We will continue doing it until we have a civilian transitional government."

Most shops and offices were closed on Friday which is the day of prayer and rest in Sudan.

Vast crowds were expected to throng the streets of Khartoum and its twin city Omdurman after the main weekly Muslim prayers at noon raising fears of confrontation.

Sudan's last elected prime minister, opposition Umma party leader, Sadiq al-Mahdi, who was overthrown by Bashir in a military coup in 1989, was expected to address supporters after prayers at one of Omdurman's most revered mosques.

Since returning to Khartoum from self-imposed exile, Mahdi has allied his party with the grass-roots who were the driving force behind the mass protests that preceded Thursday's coup.

The Sudan Professionals Association -- a well-organized umbrella group of doctors, teachers and engineers -- has called for a huge turnout at Friday's turnout as has the wider opposition Alliance for Freedom and Democracy.

The whereabouts of Sudan's president of 30 years remained unknown, and though the military leaders had said he was in a "safe place," the murkiness stirred rumors that he had fled the country or had been spirited out by the army and some part of the security apparatus, which had until Thursday served as the main pillars of al-Bashir's power.

Organizers of the demonstration said they would keep up their campaign and that they disagree with the army's plans to rule the country for the next two years. It was not immediately clear if the army would move against the protesters.

The mood on Friday among the crowd in Khartoum appeared festive, with protesters playing music and chanting, "Down again" — a reference to Defense Minister Awad Mohammed Ibn Ouf who announced al-Bashir's ouster on Thursday on Sudanese state TV.

Ibn Ouf, on a U.S. sanctions list for genocide in the Sudanese region of Darfur, was sworn in as head of the new military transitional council that has taken over.

The rest of the council is yet to be announced as the Sudanese official news agency reported that Ibn Ouf has postponed this step, pending "further consultations." Meanwhile, the state SUNA news agency said that Ibn Ouf would hold a meeting with political factions and leaders of the protest movement later in the day, apparently to negotiate a political settlement.

After the dramatic events of Thursday, when tens of thousands poured out ono Khartoum streets to celebrate al-Bashir's ouster, human rights groups urged Sudan's new military authorities to hand al-Bashir over to the International Criminal Court, where he faces charges of war crimes, crimes against humanity and genocide for his deadly campaign against insurgents in Darfur.

In Washington, the U.S. State Department called on the Sudanese military to "follow the will of the people" and "commit to the speedy handover to civilian rule."

The European Union urged the army to carry out a "swift" handover to civilian rule.

U.N. chief Antonio Guterres called for a transition that would meet the "democratic aspirations" of the Sudanese people and appealed for "calm and utmost restraint by all", his spokesman said.

That came after the African Union decried al-Bashir's military ouster, saying it was "not the appropriate response to the challenges facing Sudan and the aspirations of its people."

On Friday, the commander of Sudan's feared Rapid Support Force, a paramilitary force, said it would not "accept any solutions rejected by the Sudanese people" and for "opening the door for dialogue" with the protest movement. The force draws its origins from the Janjaweed militias that were implicated in the Darfur genocide. Mohammed Hamadati, the commander, said talks are needed so Sudan would "avoid slipping into chaos."

In his televised announcement Thursday, Ibn Ouf said also that the military had suspended the constitution, dissolved the government, declared a three-month state of emergency and closed the country's borders and airspace. A nighttime curfew was also part of the measures.

State television later broadcast footage of him taking the oath to become head of the council, alongside his new deputy, army chief of staff Lieutenant General Kamal Abdelmarouf.

Sudan analyst and researcher Eric Reeves described the military's ouster of the longtime president as a "palace coup with al-Bashir as scapegoat."

"The three-month state of emergency is a clear indication that they intend to crush the uprising in this time," he said of the Sudanese military.

Al-Bashir Bashir, who swept to power in a 1989 coup, was one of Africa's longest-serving presidents and is wanted by the International Criminal Court (ICC) on charges of genocide and war crimes.

Ibn Ouf apologized for "the mismanagement, the corruption and the injustice" that had led to mounting social inequality. He also apologized for the regime's resort to strong-arm tactics to attempt to crush the protests which had led to the "loss of people's lives."

But his apology fell on deaf ears among the protesters, who had repeatedly defied bullets and tear gas to keep up their sit-in before the army stepped in.

Thursday's announcement meant "we have not achieved anything", said another protester who gave his name only as Adel.

"We will not stop our revolution. We are calling for the regime to step down, not only Bashir."

It was a far cry from the scenes of celebration that had initially greeted the army's announcement it would intervene on Thursday, when demonstrators cheered and hugged soldiers on the streets, some of whom joined the demonstrations.

The opposition Sudanese Congress Party called for the establishment of a joint military and civilian council to rule for a four-year transitional period.

It also urged the army to give executive powers to civilians.

The military council said it was declaring a ceasefire across the country, including in war-torn Darfur.

But the rebel Sudan Liberation Army (SLA-AW) fighting government forces in Darfur denounced what it called a "palace coup".

But in the eastern cities of Kasala and Port Sudan, the releases failed to materialize, prompting protesters to storm NISS buildings, according to witnesses.

Protesters have otherwise largely heeded the calls of organizers to refrain from attacking government official or buildings as they press their campaign for sweeping reform.