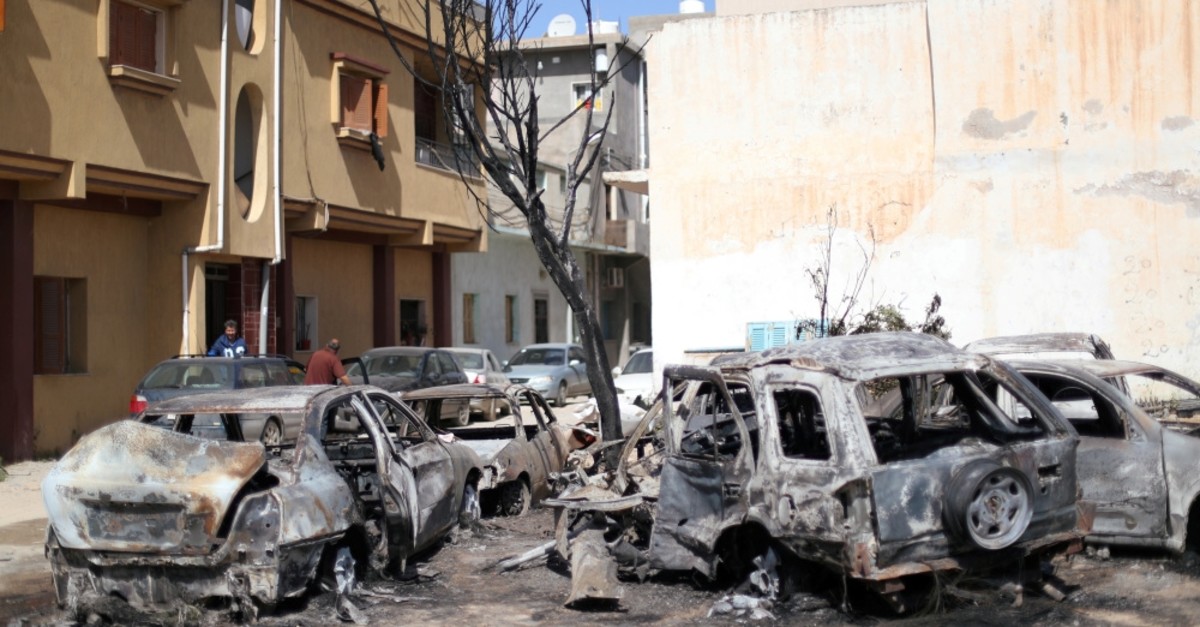 The fighting between Libya's rival factions for control of the country's capital has intensified with more than 200 dead as U.N.-led peace initiatives have failed to address the renewed crisis

Due to recent armed clashes on the outskirts of Libyan capital Tripoli, more people have lost their lives in the renewed conflict as negotiations on a draft resolution demanding a cease-fire in Tripoli failed to yield agreement between forces loyal to renegade military commander Khalifa Haftar and the U.N.-backed Government of National Accord (GNA). Haftar's forces said they recaptured the Tamanhint air base in southern Libya yesterday, which had been taken earlier by an armed group affiliated with the Tripoli government. The group, known as the South Protection Forces, initially said it seized 15 armored vehicles and ammunition when it took the base, but Mohammed al-Fares, a spokesman for Haftar's fighters, later said they were back in control.

The base is located near the southern city of Sabha and has strategic significance for control of Libya's south, which Haftar's forces seized earlier this year before moving westward to Tripoli. The internationally recognized government in Tripoli, once again faces a challenge from Gen. Khalifa Haftar who controls the country's east. Since April 4, Haftar forces have sought to wrestle control of Tripoli as part of a military campaign to capture the Libyan capital from the Tripoli government. Haftar's push on Tripoli in Libya's northwest is the latest turn in a cycle of factional violence and chaos dating back to the ouster of former President Moammar Gadhafi in 2011 and NATO's aerial operations.

Although Haftar has so far failed to wrest the capital from pro-GNA forces, sporadic fighting on the city's outskirts has left casualties on both sides. According to the World Health Organization (WHO), the fighting to control the country's capital this month has killed 205 people so far; it announced that it would deploy medical specialists, including surgeons, to treat the wounded. "Toll for armed conflict in Tripoli is 205 dead and 913 wounded," the U.N.-affiliated health body tweeted yesterday. "Medical specialists that WHO-Libya deployed to support front-line hospitals are helping perform dozens of surgeries," it added.

The U.N. Security Council was divided Wednesday on how to address the crisis in Libya after fresh negotiations on a draft resolution demanding a cease-fire in Tripoli failed to yield agreement. The divisions among world powers deepened as Tripoli struggled to recover from the heaviest fighting since an offensive was launched nearly two weeks ago. Britain has put forward a draft resolution calling for an immediate cease-fire and de-escalation, but Russia threw up concerns over language that criticized Haftar's offensive. A slightly watered-down version was put forward by Britain on Wednesday, but the three African countries on the council, Equatorial Guinea, Ivory Coast and South Africa, blocked it. Libya has remained dogged by turmoil since 2011 when a NATO-backed uprising led to the ouster and death of former President Gadhafi after more than four decades in power.

Since then, Libya's stark political divisions have yielded two rival seats of power, one in Tobruk and another in Tripoli, and a host of heavily armed militia groups. The military push by Haftar's Libyan National Army (LNA), allied with a parallel eastern administration based in Benghazi, marked a dangerous escalation in a power struggle that has dragged on since the overthrow of Gadhafi. Haftar is not recognized by the international community, as the elected parliament of the country is centered in Tripoli. However, Haftar, with financial and political support from certain countries, including some Gulf States, is an influential actor in the war-torn country.