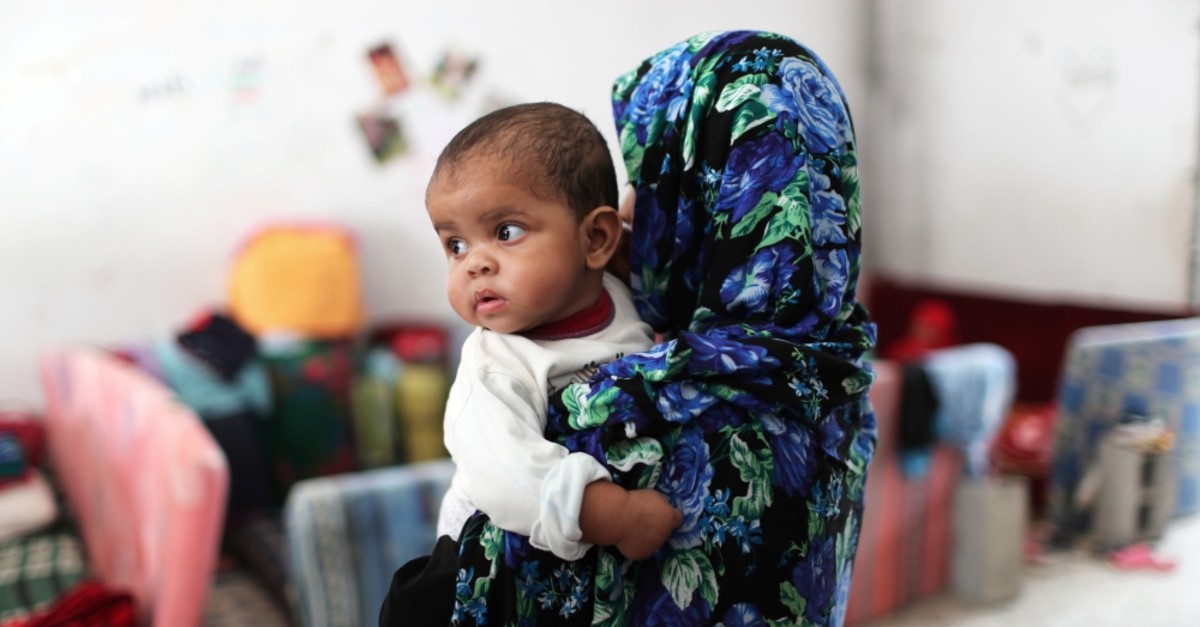 A migrant woman carries her baby at the Anti-Illegal Immigration Agency in Tajora shelter center, Tripoli, April 24, 2019.
by Daily Sabah with Agencies Apr 27, 2019 12:03 am

EU countries' inability to cope with the refugee crisis is once again in the spotlight, as fear grows over a new wave of migration prompted by Gen. Khalifa Haftar's violent offensive in Libya

In the face of a possible mass movement of refugees fleeing intense fighting in Libya, the U.N. has warned that the EU will not be able to cope with a fresh refugee crisis.

The EU is badly prepared for a new refugee crisis, according to U.N. High Commissioner for Refugees, Filippo Grandi. "Europe is not prepared for a refugee crisis today. The states are not pulling together," he said in an interview to German newspaper Die Welt. "The European public underestimates any threat, any displacement that does not take place in Europe," he added.

Since Italy's anti-immigration government came to power in July, the number of people fleeing to Europe has fallen. But Grandi warned that Europe should not make the mistake of taking the refugee issue off the agenda. He called for more unity in the organization of refugee policy in Europe. However, there has been a lack of harmony among European countries over refugee policy. Western European governments have argued that each member state should take in a quota of refugees, if a fresh crisis erupts, something which central and eastern European countries continue to resolutely oppose.

Libya has been dragged into an inextricable situation as violence continues unabated, resulting in the deaths of hundreds of people during the fighting between Gen. Khalifa Haftar, who has been leading the Libyan National Army (LNA) based in Benghazi, and forces loyal to the internationally recognized government of Tripoli.

Fayez al-Sarraj, who has been leading a third government in the country but allying with Tripoli, criticized Western governments for not taking action. The conflict is multifaceted as, in addition to the deterioration of the humanitarian situation, a migration crisis may erupt.

The turmoil engulfing the North African country has become a death trap for thousands of migrants, most of them from sub-Saharan African countries, seeking to escape poverty and find a better life in Europe. The U.N. considers Libya an unsafe country for migrants, given the considerable risk of being subjected to serious human rights abuses. Thousands of migrants who have been caught trying to cross the Mediterranean from Libya have been returned to the North African country and put in detention centers. In February, French Armed Forces Minister Florence Parly had agreed to donate six boats to the Libyan navy, under which the coastguard operates, in a move she said was aimed at helping them "in the fight against illegal immigration." But the offer angered rights groups who said they would be used to block migrant boats seeking to reach Europe, forcing those onboard to return to war-torn Libya.

The humanitarian concerns in and around Tripoli have increased sharply over the past three weeks, the International Committee of the Red Cross (ICRC) said in a statement on Thursday.

"More than 30,000 people are said to have fled their homes and are sheltering with relatives or in public buildings," it said, a figure which Libyan authorities and the U.N. say has risen to almost 35,000 now.

The U.N. voiced concern earlier this week that civilians had been trapped by shelling on densely populated parts of the city. The International Organization for Migration's (IOM) Libya office also highlighted the plight of some 3,000 migrants held at detention centers in areas hit by fighting. The U.N. on Thursday evacuated more than 350 migrants from a detention center in southern Tripoli where the worsening humanitarian situation has escalated. More than 825 refugees have been evacuated in the past two weeks from different detention centers near the conflict zones. The U.N. health agency said the fighting has killed more than 270 people, including civilians, and wounded nearly 1,300.