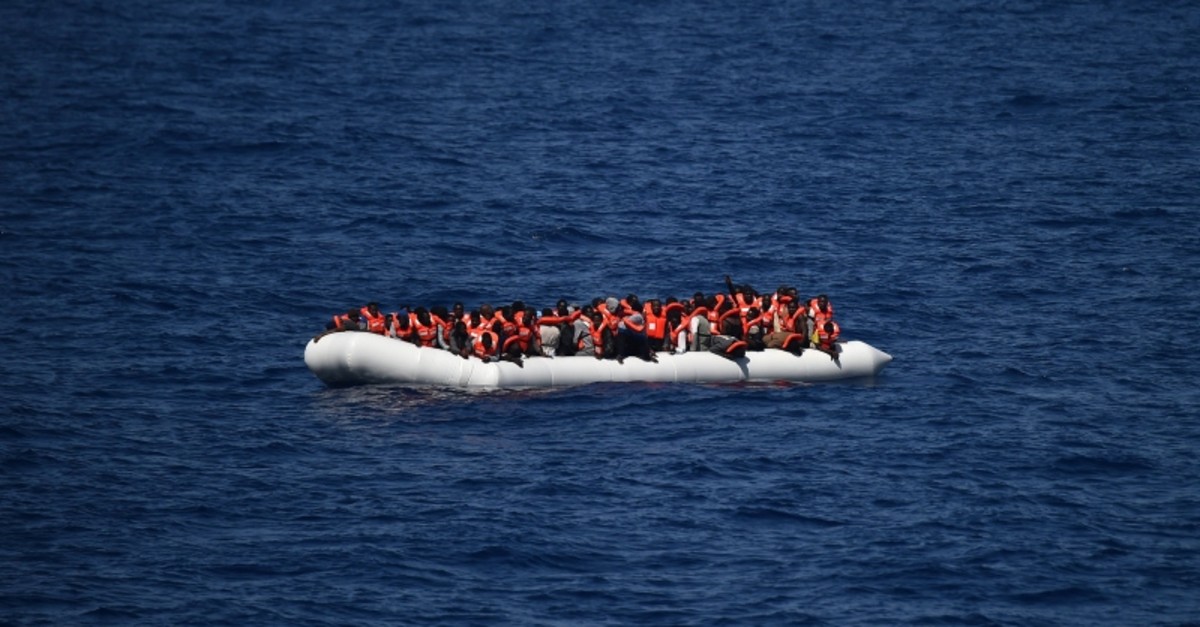 This file photo taken on May 24, 2016 shows refugees waiting on a rubber boat to be rescued during an operation at sea with the Aquarius in the Mediterranean sea in front of the Libyan coast. (AFP Photo)
by Compiled from Wire Services May 10, 2019 3:46 pm

A boat carrying up to 70 migrants from sub-Saharan Africa has sunk in the Mediterranean, leaving three people dead and dozens missing, Tunisian officials said Friday, revealing once again that crossing the central Mediterranean has become more treacherous than ever for migrants trying to reach Europe.

The bodies of three people who drowned in the accident were found Friday, a spokesman for the Tunisian defense ministry said, adding the boat left Zuwara on the northwestern Libyan coast on Thursday.

A fishing boat picked up 16 survivors, who were transferred on board one of three military vessels involved in the search and rescue operation.

A helicopter was also mobilized, the defense ministry said, adding between 60 to 70 people were believed to be on board.

Interior ministry spokesman Sofiene Zaag said however around 75 people are believed to have been on board the Italy-bound boat when it departed Libya.

An official with the International Organization for Migration in Tunisia said the smuggling boat was coming from Libya when it sent a distress signal in international waters early Friday off the Tunisian coastal city of Sfax. The official said between 60 and 70 people drowned.

The boat sank 40 nautical miles off the coast of Sfax, south of the capital Tunis. The Tunisian coast has turned into a launch pad for thousands of migrants, including Tunisians, who seek to reach Europe.

The IOM official says the migrants are now being questioned and cared for by Tunisian authorities. She said the migrants included people from Bangladesh and Morocco, among other nationalities.

Italy's far-right Interior Minister Matteo Salvini has vowed to close the country's ports to migrants, although earlier Friday dozens who had been rescued at sea disembarked in Sicily.

The Mediterranean is the "world's deadliest sea crossing" according to the United Nations refugee agency, with one person in 14 dying on the route from Libya to Europe last year.

In the face of Gen. Khalifa Haftar's weeks-long violent offensive in Libya, fear has grown that the violent clashes would prompt a new wave of migration.

The turmoil engulfing the North African country has become a death trap for thousands of migrants, most of them from sub-Saharan African countries, seeking to escape poverty and find a better life in Europe.

The U.N. considers Libya an unsafe country for migrants, given the considerable risk of being subjected to serious human rights abuses. Thousands of migrants who have been caught trying to cross the Mediterranean from Libya have been returned to the North African country and put in detention centers.