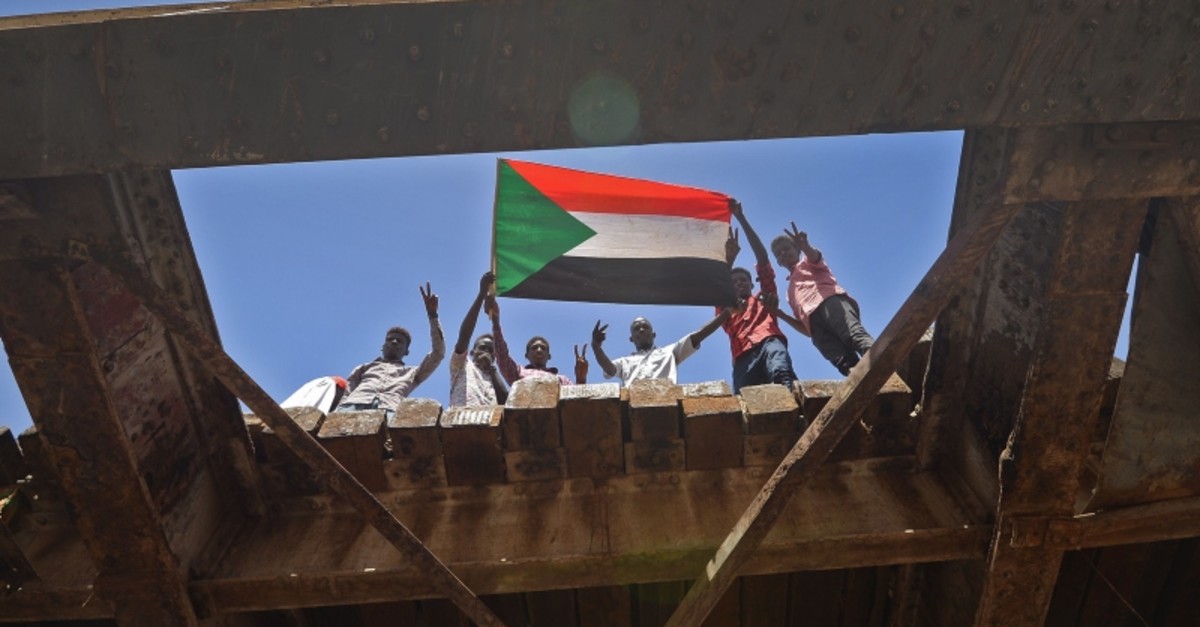 Sudanese protesters wave a national flag near the military headquarters in the capital Khartoum on May 17, 2019, during an ongoing sit-in demanding a civilian-led government transition. (AFP Photo)
by May 18, 2019 1:54 am

Hundreds of demonstrators worked to clear away bricks and debris Friday, after military rulers demanded that roadblocks which have paralysed parts of Khartoum be dismantled before talks on a new transitional body can resume.

Key international players voiced alarm and urged an immediate resumption of negotiations, which the ruling military council on Wednesday suspended with the protesters for 72 hours.

The council, which said that security in the capital had deteriorated, froze talks that were due to finalise the make-up of a new body that would govern Sudan for a transitional period of three years.

The issue is the thorniest to have come up in ongoing talks on installing civilian rule after the generals took over following the ouster of autocratic president Omar al-Bashir last month.

In the early hours of Friday, hundreds of demonstrators chanting revolutionary slogans tore down roadblocks on Nile Street, a key avenue, that had paralysed downtown Khartoum this week.

"We have removed the bricks... but if they do not respond to our demands then we will bring the bricks again," protester Sumeya Abdrahman told AFP while demonstrators cleared the debris.

Protesters had erected the barricades to pressure the military rulers when talks began on Monday, but the roadblocks triggered clashes between demonstrators and security forces according to witnesses.

The military council said roadblocks are "totally unacceptable", but the generals will allow barricades set up by protesters outside the army headquarters to remain and a sit-in there to continue.

Talks between the two sides achieved significant breakthroughs on Monday, but were marred by violence which left five protesters and an army major dead.

Protesters blamed the paramilitary Rapid Support Force, but Burhan said there were "armed elements among demonstrators who were shooting at security forces".

On Friday, Sudanese protesters attended prayers at the sit-in outside the military headquarters, sitting on mats placed in rows on the street.

"We have all the respect for the army and the RSF. They are our partners in the revolution," said the prayer leader as teenagers sprinkled water on worshippers gathered under the scorching sun.

As the prayers ended, worshippers chanted "freedom, peace, justice," the catchcry of the protest movement that brought down Bashir.

"I don't care about the heat ... What I care about is to finish this thing (the political impasse)," said protester Mohamed Ismail as he poured cold water on his head to get relieve from the midday sun.

In talks in Washington, officials from the United States, United Nations, African Union and European powers expressed concern about the violence and urged an "immediate resumption of talks", said Tibor Nagy, the top US diplomat for Africa.

The powers called on the military council to allow peaceful protests and for the two sides to "reach an agreement ASAP on an interim government that is truly civilian-led and reflects the will of the Sudanese people", Nagy tweeted.

Britain, France, Germany and Norway took part in the talks as well as Ethiopia, the chair of the eight-nation IGAD regional bloc.

The Alliance for Freedom and Change, which is leading the protest movement, said the move to suspend talks was "regrettable".

"It ignores the developments achieved in negotiations so far... and the fact that Wednesday's meeting was to finalise the agreement, which would have stopped the escalations such as roadblocks."

The protest movement vowed to press on with the sit-in, and has urged supporters to converge at the army headquarters where thousands have been camped out for weeks.

Protesters are demanding a civilian-led transition, which the generals have steadfastly resisted since bowing to demonstrators' demands in toppling Bashir.

During the first two days of talks the two sides had agreed on an overall civilian structure, including a three-year period for the full transfer of power to a civilian administration.

They had also agreed that parliament be composed of 300 members for the transition, with around two-thirds from the protest alliance and the rest drawn from other political groups.

But the make-up of the new sovereign council has been the toughest part of the negotiations, with the two sides so far proposing different compositions of the body.