35 killed as Sudan military try to break up sit-in 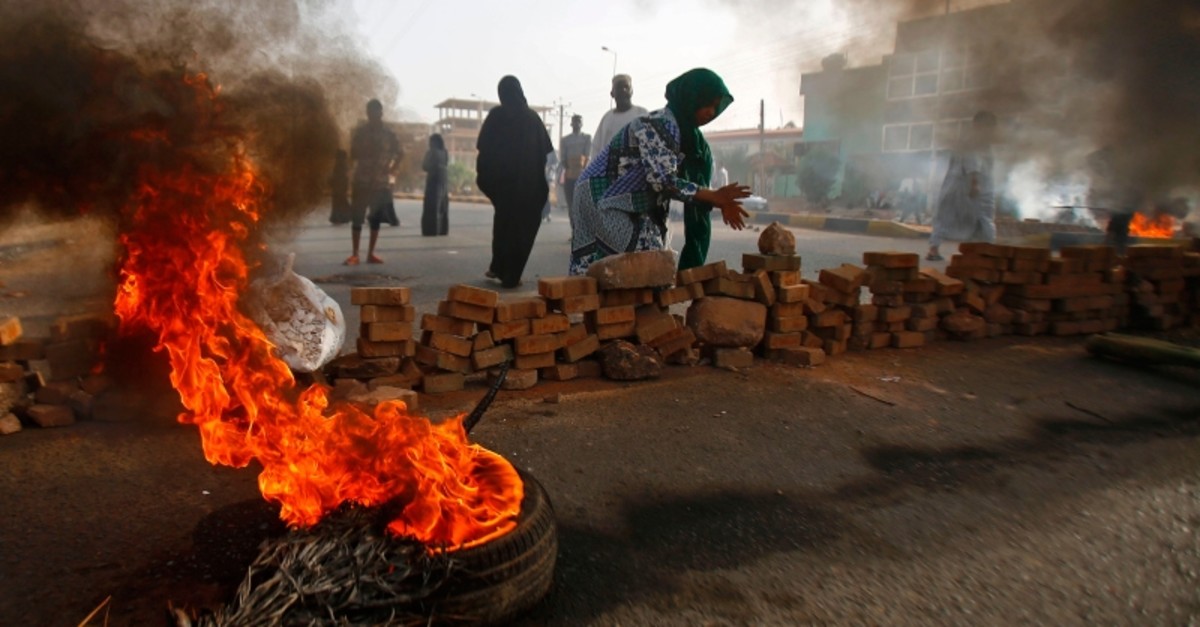 Sudanese protesters close Street 60 with burning tyres and paving stones as the military forces tried to disperse the sit-in outside Khartoum's army headquarters on June 3, 2019. (AFP Photo)
by Compiled from Wire Services
Jun 03, 2019 9:51 am

Thirteen protesters were initially shot dead Monday as Sudan's ruling military tried to break up a sit-in protest outside army headquarters in Khartoum, a doctors' committee close to demonstrators said.

The death toll has risen to 35 since the committee's last statement, the Central Committee of Sudanese Doctors said on its Facebook page.

The military's move came after a weeks-long standoff with protesters seeking a speedy transition to civilian rule following the April ouster of long-time strongman Omar al-Bashir.

Dura Gambo, an activist, said large numbers of troops besieged the sit-in area outside the military's headquarters in Khartoum on Monday and arrested protesters trying to leave.

"They have used the heavy rain yesterday and moved in the early morning to disperse people," she said.

Sudan's opposition and protest group alliance said it was halting all contact and negotiations with the country's military council, after security forces launched the deadly raid.

The Declaration of Freedom and Change Forces (DFCF) had been in talks with the Transitional Military Council (TMC) that took over from Omar al-Bashir in May, but negotiations have stalled in recent weeks.

An Associated Press journalist saw buses and soldiers on foot blocking roads leading to the protest site. Civilians were not allowed to walk in the streets, including women and children.

Videos circulating online appeared to show protesters standing at low brick barricades in the street, then being driven back by walls of blue-clad security forces carrying sticks.

Other videos showed protesters running through streets lined with sit-in tents, heads down, as the sound of gunfire filled the air.

Turkey is "deeply concerned" about Sudanese security forces' deadly intervention against sit-in protests in Khartoum, the Foreign Ministry said in a statement.

The ministry said the negotiation process should be in line with national consensus as it emphasized that peaceful methods should be adopted instead of resorting to violence to ensure stability and security.

The statement urged Sudan's Transitional Military Council (TMC), the country's military establishment that deposed former President Omar al-Bashir, to rapidly meet the expectations of the Sudanese people and pointed to the importance of establishing a civilian government.

The Foreign Ministry stressed that Ankara would always support "brotherly" Sudan and its citizens.

Tens of thousands of protesters have been camped for weeks outside the military's headquarters, the epicenter of Sudan's uprising that led to the military overthrow of al-Bashir.

Protesters had vowed to remain in the streets after al-Bashir's ouster, saying an end to his 30-year rule did not go far enough.

Protest leaders and military officials have been negotiating over the makeup of a transitional government, as protesters call for "limited military representation" in a sovereign council that would lead the country as it transitions to civilian rule over three years.

Both sides are split over the makeup and leadership of the council, with the ruling generals refusing to relinquish power.