11 killed in Sudan's capital Khartoum amid civil disobedience against military 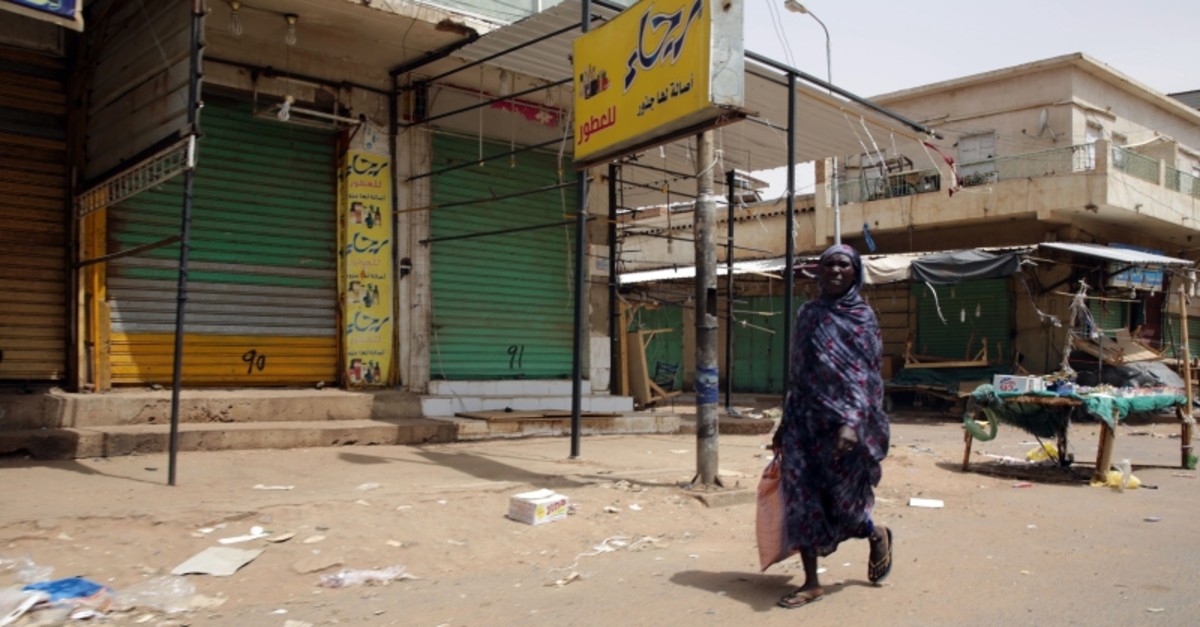 At least 11 people have been killed in Sudan's capital Khartoum in the past two days, the Health Ministry said Sunday.

Suleman Abdul Jabbar, undersecretary of the Health Ministry, confirmed the death toll to Anadolu Agency, adding that the assailants used knives and other light weapons.

"We urge citizens to not listen to rumors and maintain confidence in the authorities who are doing their best for stability and security of the capital Khartoum," he added.

The campaign got underway nearly a week after the assault on demonstrators at the sit-in outside army headquarters in central Khartoum, which followed talks breaking down between protest leaders and military rulers over who should lead a new governing body -- a civilian or soldier.

Following the call for the campaign of civil disobedience, protesters set about building roadblocks in Khartoum while markets and shops were closed in several other towns and cities.

Hundreds of people were left stranded at Khartoum airport due to flight disturbances as civil aviation officials joined the strike.

Abdul Jabbar, however, denied any hospitals were closed forcibly but added some medical staff was attacked by unidentified people.

Earlier this week, military forces cracked down on a main protest camp in Khartoum, in which at least 118 protesters were killed and hundreds injured, according to the Central Committee of Sudanese Doctors.

Sudan has remained in turmoil since April 11, when the military establishment deposed long-serving President Omar al-Bashir after months of popular protests against his 30-year rule.

Following the move, the military council is now overseeing a two-year "transitional period" during which it has pledged to hold free presidential elections.

Demonstrators, however, have remained on the streets to demand that the military council hand over power -- at the earliest possible date -- to a civilian authority.

"Almost all internal roads of Bahari have roadblocks. Protesters are even stopping residents from going to work," a witness told AFP.

But riot police swiftly moved in, firing gunshots in the air and tear gas at demonstrators before clearing the makeshift barriers, he said.

In Bahari district, onlookers saw a police truck full of people in civilian clothing but it was not possible to confirm whether they were arrested demonstrators.

"We blocked the streets to send a message to those trying to steal our revolution that they will fail," said Emad Ibrahim, 25, a protester from Bahari.

"It is a long road ahead for us, but after the sacrifice made by our brothers who have been killed, we believe that we will achieve our goal."

Several protesters said they faced difficulties but were still backing the campaign.

"The roadblocks prevented me from reaching the market to buy vegetables," said Hassan Abdelrahim, a vegetable vendor.

"This will impact my income, but when I look at these youngsters who are on the streets since six months, I'm not angry even if I lose my income."

Several vehicles of the feared Rapid Support Forces, blamed by witnesses for the killings, were seen Sunday moving across some parts of the capital loaded with machine guns.

Several airlines have scrapped their Sudan flights since the deadly raid and passengers were left waiting outside Khartoum airport's departures terminal Sunday, although it was unclear whether any flights would take off.

The downtown business district was largely shut and buses were not running in several areas, but private vehicles were ferrying passengers in some locations.

In Omdurman, many shops and markets remained closed but people were seen buying staples in some grocery stores.

"Troops were also seen removing roadblocks from some streets in Omdurman," an onlooker said.

In the central city of Al-Obeid, the main market was shut and several bank employees did not report to work, residents said.

In the town of Madani, southeast of the capital, people were seen queueing outside closed bakeries while the main market was also shut.

"I went to three bakeries and have been unable to buy bread," a Madani resident told AFP by telephone, adding that protesters had built roadblocks on several streets making it difficult for vehicles to pass.

It was the tripling of bread prices that first triggered protests against Bashir in December, which later turned into a nationwide movement against his ironfisted rule.

After the president was ousted in April, demonstrators remained camped out for weeks in Khartoum to pressure the ruling generals into transferring power.

After several rounds of negotiations between protest leaders and the military, talks broke down in mid-May.

Witnesses say the subsequent assault on the sit-in was led by the RSF, who have their origins in the notorious Janjaweed militia, accused of abuses in the Darfur conflict between 2003 and 2004.

Ethiopian Prime Minister Abiy Ahmed traveled to Sudan on Friday in a bid to revive negotiations, holding separate meetings with the two sides after which he called for a "quick" democratic transition.