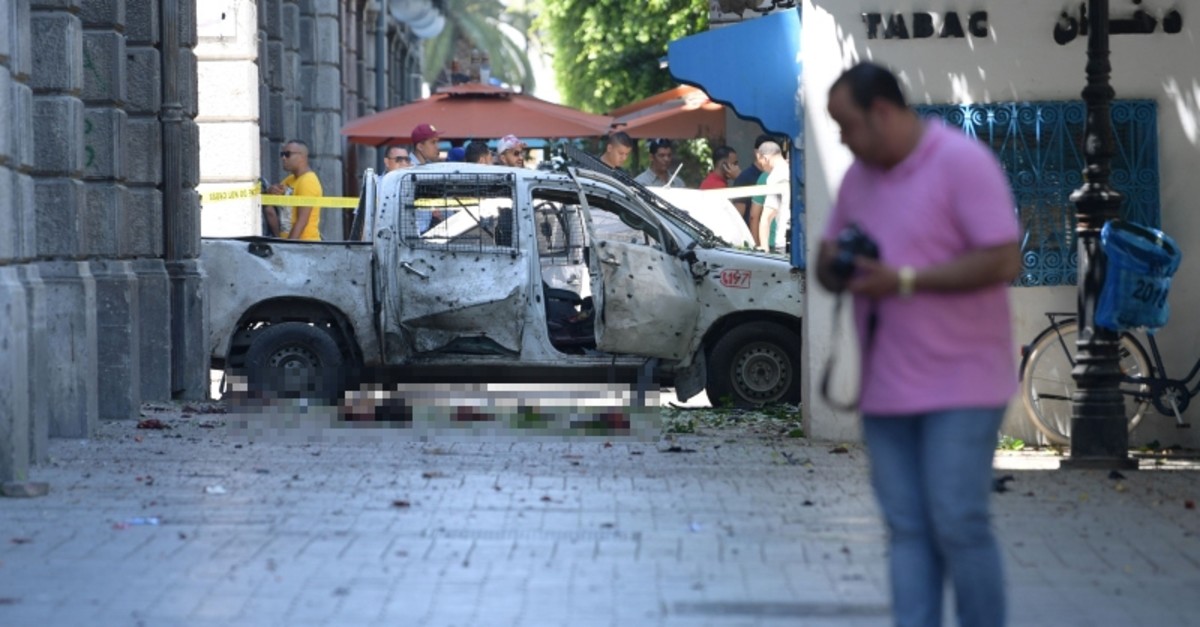 Body parts lie next to a shrapnel riddled vehicle at the site of attack in the Tunisian capital's main avenue Habib Bourguiba on June 27, 2019. (AFP Photo)
by Daily Sabah with Wires
Jun 27, 2019 1:14 pm

Two suicide bombers blew themselves up in separate attacks on police in the Tunisian capital on Thursday, killing one police officer and wounding several other people, the government said.

It was not immediately known who was behind the attacks, which took place months before an election and at the peak of a tourist season in which Tunisia is hoping for a record number of visitors.

The first attack targeted a police patrol in Charles de Gaulle Street in central Tunis. One police officer was killed and at least one other officer and three civilians were wounded, the Interior Ministry said.

Shortly afterwards, a second suicide bomber blew himself up near a police station in al-Qarjani district. Four people were wounded, the Interior Ministry said.

Heavily-armed police cordoned off the sites of the attacks.

Tunisia has been battling militant groups operating in remote areas near the border with Algeria since an uprising overthrew autocratic leader Zine Abidine Ben Ali in 2011. High unemployment has also stoked unrest in recent years.

Last October, a woman blew herself up in the canter of Tunis capital, wounding 15 people including 10 police officers in an explosion that broke period of calm after dozens died in militant attacks in 2015.

Security has improved since authorities imposed a state of emergency in November 2015 after those attacks - one at a museum in Tunis and another on a beach in Sousse. A third attack targeted presidential guards in the capital and killed 12. Daesh claimed responsibility for the attacks.