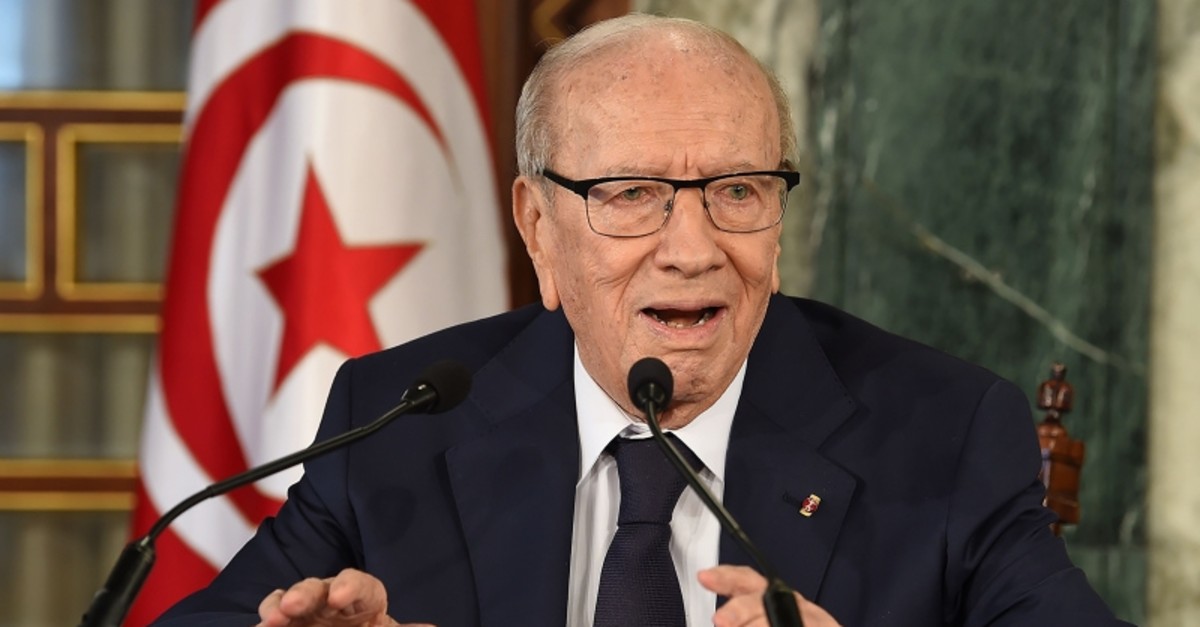 Tunisia's 92-year-old president, Beji Caid Essebsi, has died, the presidency said in a statement on Thursday.

"On Thursday morning, the President of the Republic died at the military hospital in Tunis.. The burial ceremony will be announced later," the presidency said in statement.

Essebsi was taken to a military hospital on Wednesday to receive treatment in the intensive care unit with his son Hafedh Caid Essebsi telling AFP that "things are not going well."

Essebsi, the oldest head of state after Britain's Queen Elizabeth II, appeared feeble in a video released by his office on Monday of a meeting with Defense Minister Abdelkarim Zbidi at the ministry.

Prime Minister Youssef Chahed announced a seven-day mourning period, saying he had "a pivotal role in the success of the democratic transition." Flags at state institutions will be lowered to half-mast, while cultural and sports events have been halted until further notice, the state-run news agency reported. Tunisian television stations have interrupted their broadcast to air recitations from the Quran.

"I wish God's mercy upon him and extend my condolences to the brotherly people of Tunisia," Erdoğan said in a statement.

He will always be remembered with respect, he added.

The Independent Electoral Commission announced Thursday that the country will hold new presidential elections on Sept. 15. The presidential vote was originally scheduled for November 17.

The president's death comes as Tunisia marks Republic Day on Thursday, the 62nd anniversary of the abolition of the monarchy.

Concerned for the country's stability, politicians and social media users have earlier called for greater transparency about the president's health since he was hospitalized last month on June 27 after suffering a severe health crisis with reports pronouncing him dead, as the country was rocked by two suicide attacks in capital Tunis. He had been briefly hospitalized the previous week as well.

In an announcement on state television, Parliament Speaker Mohamed Ennaceur said he is taking over as the country's interim president, asking Tunisians to unite and praising the former leader's contributions. The Tunisian constitution calls for the parliament leader to take over for 45 to 90 days while elections are organized.

However the Constitutional Court is first supposed to formally confirm that the presidency is vacant, and the court doesn't exist yet. So there is some uncertainty over the legitimacy of Ennaceur's leadership.

Born in 1934, Ennaceur holds a PhD in law from Sorbonne University in Paris. He has served as Speaker of Parliament since December 2014 from Nidaa Tounes party that had secured majority of the country's legislative election.

Presidential elections were originally are scheduled for Nov. 17, after parliamentary elections which have been set for October 6. However, the electoral commission head Nabil Baffounsaid Thursday that Ennaceur "has 90 days to organize a presidential election" under the North African country's constitution. That means the poll must be held by Oct. 23.

In April, Essebsi had announced he wouldn't run again in elections, saying a younger person should lead the country, despite his Nidaa Tounes party calling for him to stand. The party has not identified another candidate yet.

Essebsi has neither rejected nor enacted an amended electoral code passed by parliament in June that would bar the way for several strong candidates in the upcoming polls. The restrictions would rule out the candidacy of media magnate Nabil Karoui, charged earlier this month with money laundering, who has formed a political party and stated his intention to stand in the poll.

Born in Sidi Bou Said, a northern suburb of Tunis, Essebsi studied law in Paris and began practicing in 1952. After independence from France in 1956, he became an adviser to state founder Habib Bourguiba. Over the years, Essebsi was director-general of the national police and interior minister. In April, the commission tasked with healing the wounds of dictatorship dug up accusations of complicity for his role in the 1960s as national security chief and later interior minister for keeping silent about on the torture of victims. Essebsi later held the defense portfolio before becoming ambassador to France. After a subsequent posting as Tunisia's envoy to Germany, he was named foreign minister. He also served in parliament, holding the speakership in 1990 and 1991.

After the overthrow of Ben Ali, Essebsi led the immediate transition as prime minister in 2011 and organized parliamentary elections later that year won by the conservative Ennahda party.

The following year he was key in founding the secularist political party Nidaa Tounes (Call of Tunis), which brought together a mix of businessmen, academics, trade unionists and sympathizers of the old regime, united in their opposition to Ennahda.

Nidaa Tounes won the polls in 2014 and formed a coalition with the conservative Ennahda, which lasted four years before the two parties split. Nevertheless, Nidaa Tounes was to ally with Ennahda after its 2014 electoral success, angering many of the party's voters. In the second half of his mandate, in the run-up to new elections, Essebsi's relationship with Ennahda leader Rached Ghannouchi deteriorated, leading to a split at the end of 2018.

But Essebsi's party has struggled to overcome bitter internal divisions and to bring Prime Minister Youssef Chahed back into the fold. Tensions have flared between Chahed and Essebsi's son, Hafedh, leading to the premier being sidelined from Nidaa Tounes and forming his own rival party, Tahia Tounes.

Tunisia has been hailed as the only democratic success of the Arab Spring uprisings against dictatorship, with a new constitution and free elections in 2011 and 2014. Under a new constitution guaranteeing democratic freedoms, Essebsi had limited powers compared with Ben Ali, and he was mainly responsible for foreign and defense policies.

Ghannouchi expressed his sorrow for Essebsi's death, saying the late president had made significant contributions to building the state.

Turkey's Ministry of Foreign Affairs extended condolences to the friendly and brotherly people of Tunisia, underlining his role is Tunisia's successful and peaceful political transition after the Jasmine Revolution

"H.E. Essebsi, who was conferred with the State order by President Erdoğan in 2017, has greatly contributed to the strengthening of cooperation and friendship between Turkey and Tunisia in every field. As an esteemed friend of Turkey, H.E. Essebsi will be dearly remembered with respect," the statement said.

Italian Prime Minister Giuseppe Conte, on Twitter, saluted Essebsi as "a man and statesman with great political experience and humanity, who served his country throughout his life" and expressed "sincere condolences to his family and all of Tunisia."

Tunisia lost one of its most "competent" and "courageous" leaders, EU foreign policy chief Federica Mogherini said in a statement.

German Chancellor Angela Merkel on Thursday called Essebsi "a courageous actor on the road to democracy."

During Essebsi's term, Tunisia has been hit by repeated terrorist attacks since the overthrow of Ben Ali, raising fears over the country's fragile democracy and throttling its tourism industry.

In March 2015, gunmen killed 21 tourists and a policeman at the National Bardo Museum in Tunis. In June that year, 30 Britons were among 38 foreign holidaymakers killed in a gun and grenade attack on a beach resort near the Tunisian city of Sousse.

In November 2015, a suicide bombing against a bus in the capital carrying presidential guards killed 12. All three attacks were claimed by the Daesh group that prompted a state of emergency that remains until today.

Essebsi worked to establish a legacy as a guarantor of equality between men and women regarding inheritance, bringing a bill before parliament on the sensitive subject that is touched on in the Quran. But debate bogged down in the run-up to this year's elections, and Essebsi passed away without the bill coming to a vote.

While he often repeated that respect for human rights was a cornerstone of the new democracy, Essebsi's detractors continued to accuse him of seeking to restore the regime of Ben Ali. He spearheaded a controversial amnesty bill for people implicated in corruption allegations under the dictator. Facing outcry, the text was revised to only include the officials accused of being implicated in administrative corruption scandals and not taking bribes.

He also said he was in favor of a more presidential regime, which would require revision of the 2014 constitution, one of the lasting achievements of the post-revolution period.

And while Essebsi repeatedly stressed freedom of the press, he would still at times lash out at critical media.

In the end appointing his son Hafedh head of the Nidaa Tounes party sparked controversy and contributed to party infighting, with Essebsi accused of seeking a dynastic succession -- something he consistently denied.

"A democracy cannot be built in eight years," he said in January. "Tangible results need time."