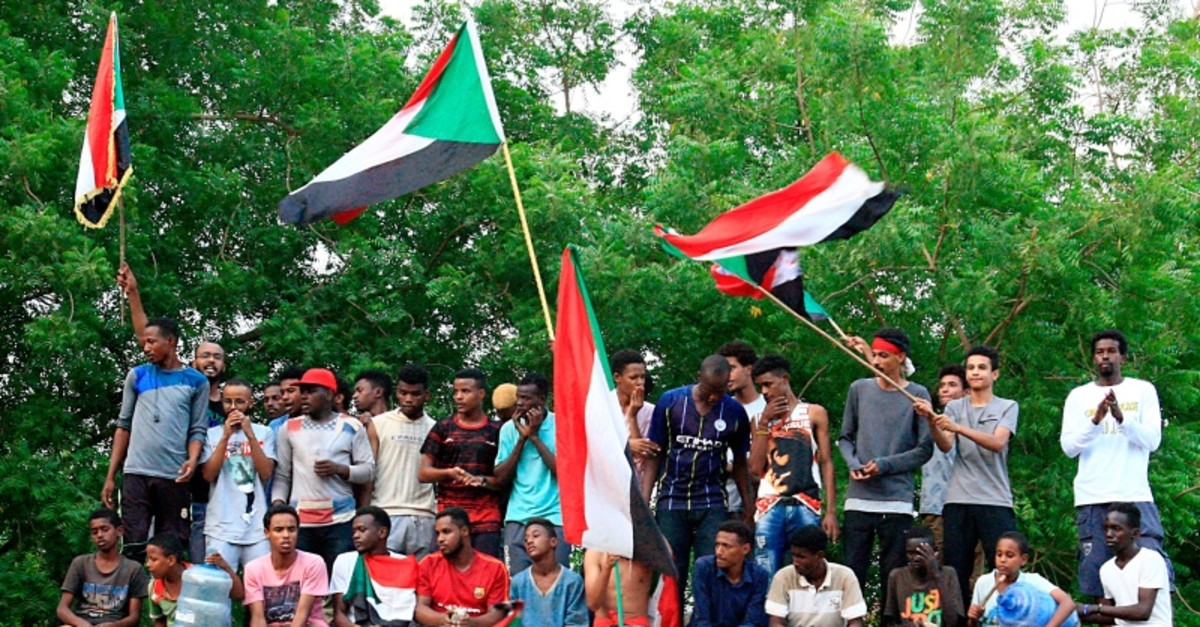 Sudanese demonstrators wave their national flag as they celebrate in Khartoum early on August 3, 2019, after Sudan's ruling generals and protest leaders reached a ,full agreement, on the constitutional declaration. (AFP Photo)
by Compiled from Wire Services Aug 03, 2019 11:59 am

The African Union envoy to Sudan said Saturday the pro-democracy movement and the ruling military council have finalized a power-sharing agreement.

Mohammed el-Hassan Lebatt told reporters that the two sides "fully agreed" on a constitutional declaration outlining the division of power for a three-year transition to elections. He did not provide further details, but said both sides would meet later on Saturday to prepare for a signing ceremony.

The main opposition coalition, the Forces of Freedom and Change (FFC), welcomed the agreement as a "first step with more to follow" and pledged to complete the journey to "freedom, peace and justice" in Sudan. The pro-democracy coalition issued a statement saying they would sing the document Sunday.

After the announcement, reporters erupted in cheers and the generals immediately exited the hall where the negotiations were held in Khartoum. Protest leaders remained to answer journalists' questions.

"We agreed on sensitive issues related to security and independence of the judiciary and the powers of the cabinet as well as the ruling sovereign council," protest leader Ibrahim al-Amin told AFP.

Under the agreement, "the feared paramilitary Rapid Support Force will report to the head of the armed forces," said protest leader Monzer Abu al Maali.

The protest movement has long blamed the irregulars of the powerful RSF, whose commander General Mohamed Hamdan Daglo is deputy head of the ruling military council, for the deadly violence against demonstrators.

The military overthrew President Omar al-Bashir in April following months of mass protests against his three-decade-long authoritarian rule. The protesters remained in the streets, demanding a rapid transition to a civilian government. They have been locked in tense negotiations with the military for weeks while holding mass protests.

The document is complementary to a power-sharing deal signed on July 17 that aims to form a joint civilian-military ruling body which will oversee the formation of a transitional civilian government and parliament to govern for a three-year transition period.

The two sides reached a preliminary agreement last month following pressure from the United States and its Arab allies, amid growing concerns the political crisis could ignite civil war.

That document provided for the establishment of a joint civilian-military sovereign council that would rule Sudan for a little over three years while elections are organized. A military leader would head the 11-member council for the first 21 months, followed by a civilian leader for the next 18. There would also be a Cabinet made up of technocrats chosen by the protesters, as well as a legislative council, the makeup of which would be decided within three months.

But the two sides remained divided on a number of issues, including whether military leaders would be immune from prosecution over recent violence against protesters. It was not immediately clear whether they had resolved that dispute.

The two sides came under renewed pressure this week after security forces opened fire on student protesters in the city of Obeid, leaving six people dead. At least nine troops from the paramilitary Rapid Support forces were arrested over the killings.

In June, security forces violently dispersed the protesters' main sit-in outside the military headquarters in Khartoum, killing dozens of people and plunging the fragile transition into crisis.

Protest leader Omar al-Dagir said the agreement announced Saturday would pave the way for appointments to the transitional bodies.

"The government will prioritize peace (with rebel groups) and an independent and fair investigation to reveal those who killed the martyrs and hold them accountable," he said.

Sudan has been convulsed by rebellions in its far-flung provinces for decades. Al-Bashir, who was jailed after being removed from power, is wanted by the International Criminal Court on charges of genocide stemming from the Darfur conflict in the early 2000s. The military has said he will not be extradited. Sudanese prosecutors have charged him with involvement in violence against protesters.

Crowds of Sudanese people outside the hall broke out in celebration after the announcement.

The jubilant crowds waved the Sudanese flag chanting "civilian, civilian" and women were ululating as cars driving honked their car horns, according to an AFP correspondent in the area.

"We have been waiting for a civilian state to seek fair retribution from the murderers of our sons," one protester Somaiya Sadeq told AFP.

On June 3, armed men in military fatigues carried out a brutal raid on a protest camp in Khartoum that was widely blamed on the RSF.

At least 127 people were killed, according to doctors linked to the protesters. Officials have given a much lower death toll.

On Thursday, four protesters were shot dead at a rally in the Sudanese city of Omdurman, according to medics linked to the protest movement.

The gunfire occurred as thousands of demonstrators took to the streets in several cities across Sudan, including the capital Khartoum and its twin city Omdurman, to demonstrate against the killing of schoolchildren at a Monday protest in Al-Obeid in North Kordofan.

General Shamseddine Kabbashi, spokesman for the ruling military council, announced on Friday that nine paramilitary men of the feared Rapid Support Forces had been arrested for killings in Al-Obeid and vowed that measures will be taken against those responsible for Thursday's violence.

To protester Ahmed Ibrahim, the agreement is a proof to the success of the Sudan's popular uprising since December against Bashir.

"For us, the revolution succeeded now and our country set foot on the road toward a civilian rule," said the 25-year-old.
RELATED TOPICS