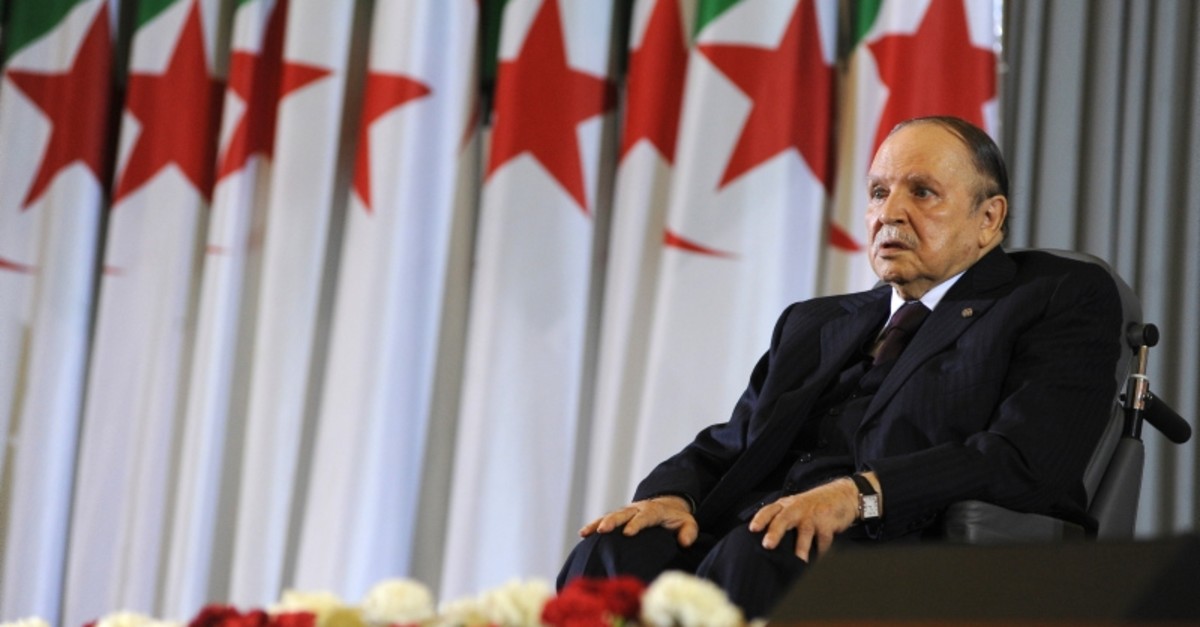 In this April 28, 2014 file photo, Algerian President Abdelaziz Bouteflika sits in a wheelchair after taking oath as President, in Algiers. (AP Photo)
by reuters
Aug 05, 2019 9:51 pm

The former public works and transport minister Abdelghani Zaalane and ex-labor minister Mohamed El Ghazi are the latest senior officials to be detained since protesters earlier this year demanded the prosecution of people involved in corruption and the departure of the ruling elite.

A judge at the supreme court ordered their detention over charges including "intentional waste of public property", the state channel said.

Zaalane served as minister from May 2017 to March 2019 and was Bouteflika's campaign manager for a presidential election previously planned for April this year, when Bouteflika had been seeking a fifth term of office.

Five former ministers have now been detained since February, when the protests broke out, after investigations over alleged corruption under the former regime.

Ex-prime ministers Ahmed Ouyahia and Abdelmalek Sellak have also been placed in custody for charges including "dissipation of public funds".

Bouteflika ended his 20-year-rule on April 2 under pressure from the army and protesters, who are now seeking the removal of the remaining symbols of the old guard.

The army has become the main player in Algerian politics. Its chief of staff Lieutenant General Ahmed Gaed Salah has vowed to help the judiciary prosecute people suspected of corruption.

Algeria has postponed a presidential election initially planned for July 4, citing a lack of candidates. No new date has been set for the vote.

Interim president Abdelkader Bensalah late last month named a panel to begin a dialogue with the opposition with the aim of eventually holding a presidential election.

Protesters are now seeking the resignation of Bensalah, a former head of the upper house of parliament, and Prime Minister Noureddine Bedoui, whom they regard as close to Bouteflika.