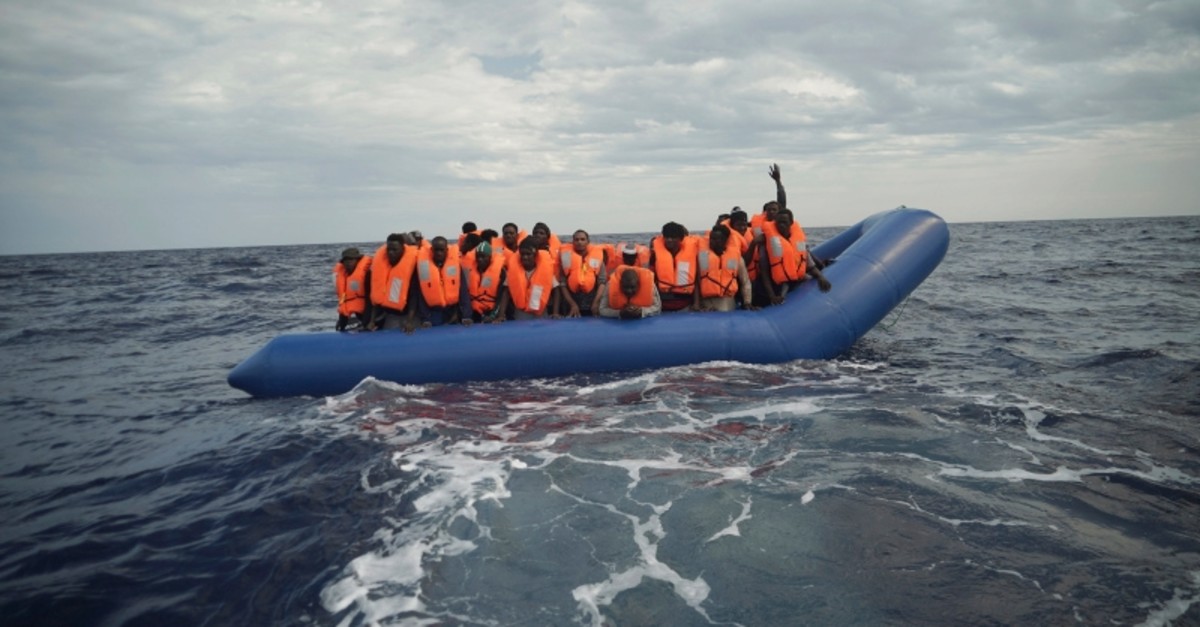 A migrant waves his hand in the air from on a blue rubber boat some 14 nautical miles from the coast of Libya in Mediterranean Sea, Sunday, Sept. 8, 2019. (AP Photo)
by Associated Press Sep 08, 2019 9:51 pm
Humanitarian groups SOS Mediterranee and Doctors Without Borders rescued 50 migrants on Sunday from a rubber dinghy off Libya's coast and brought them aboard their charity ship, Ocean Viking.

An AP journalist aboard the Norwegian-flagged Ocean Viking witnessed the rescue of a pregnant woman, 12 minors and 37 men, all from sub-Saharan Africa. It happened about 14 nautical miles (16 statute miles) from Libya.

Libyan authorities, responsible for search and rescue in that area of the Mediterranean, didn't answer multiple contact attempts by Ocean Viking. Authorities in Rome and Malta, when contacted, referred Ocean Viking to their Libyan counterparts. A fishing vessel, seen near the rubber boat, didn't respond to contact.

A European Union plane from Operation Sophia overflew Ocean Viking, the dinghy and the fishing boat multiple times shortly before the people were rescued.

In Greece, Prime Minister Kyriakos Mitsotakis has criticized Turkish President Recep Tayyip Erdogan for a statement he made last week about opening the gates for Syrian refugees to massively migrate into Europe.

Mitsotakis said at a news conference in the northern Greek city of Thessaloniki that Erdogan can't "threaten" Greece and the European Union by trying to wrest more money to deal with mass migration, adding that the bloc has already provided Turkey with 6 billion euros in aid.

Mitsotakis also criticized EU countries for not doing their part to accept refugees, especially unaccompanied children, saying that if they couldn't show solidarity with fellow EU members, they should leave the Schengen area of free peoples' movement.