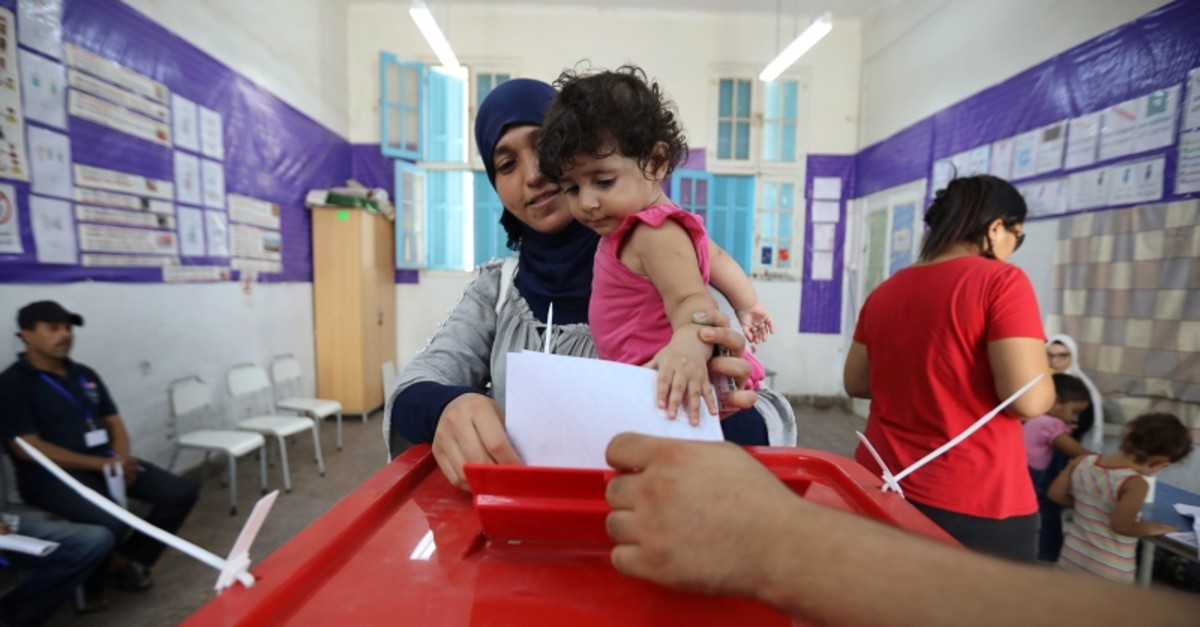 A woman carries a child as she casts her vote at a polling station during presidential election in Tunis, Tunisia Sept. 15, 2019. (Reuters Photo)
by Compiled from Wire Services Sep 15, 2019 10:27 am

Conservative law professor Kais Saied leads the first round of Tunisia's presidential election with 19% of votes, according to partial results released by the electoral commission on Monday.

With just over a quarter of votes counted, independent Saied is ahead of imprisoned media magnate Nabil Karoui, at 14.9%, and Ennahdha's candidate Abdelfattah Mourou, at 13.1%.

Tunisian voters turned out Sunday to choose from a crowded field of candidates after a divisive campaign in the country's second free presidential poll since the 2011 Arab Spring. The winner's top task will be stabilizing the country's young democracy. 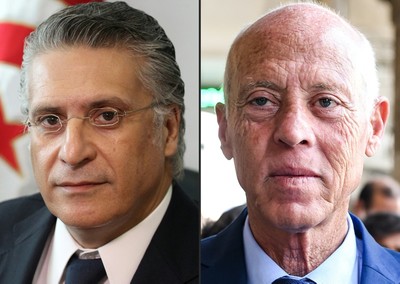 Official preliminary results are expected in the next couple of days from Sunday's first-round voting in this small Mediterranean country that unleashed the 2011 Arab Spring uprising. A second-round vote is expected by Oct. 13, the electoral commission chief said.

Saied has no political background but notably picked up support among young voters with his straightforward, anti-system platform. Frustration with corruption has driven many voters, which might have increased the appeal of an outsider candidate.

Karoui has been jailed since last month on money laundering and tax evasion charges. His supporters declared victory on Sunday, and his wife read a letter he wrote from jail in which he thanked them. She said his legal team is pushing for his release as soon as Monday.

Karoui, meanwhile, positioned himself as the candidate of the poor, using his TV network to Kaise money for charity. His arrest appears to have mobilized voters who feel wronged or sidelined in the Tunisian economy. Karoui was allowed to remain in the race because he has not been convicted.

Both promised to fight unemployment, a key problem in Tunisia that also helped drive its Arab Spring revolution.

The electoral commission announced that the overall turnout was a relatively low 45%. If no candidate wins more than 50% of Sunday's vote, the election goes to a second round. The date of the runoff will be announced once the final first-round results are declared.

Some 13,000 polling booths opened across Tunisia at 8 a.m. (0700 GMT) and Mourou smiled broadly as he cast his ballot, while Chahed said he was "proud of this great event," after voting.

"The world is watching. By tonight or tomorrow, Tunisia will be in good hands," the premier said.

His popularity has been tarnished by a sluggish economy and the rising cost of living.

The prime minister has also found himself having to vehemently deny accusations that Karoui's detention since late August was politically inspired.

At polling stations visited by AFP journalists in the early hours, there was a high proportion of older voters, but few young people.

"Where are the young people? This is their country, their future," said Adil Toumi, a man in his 60s who came to vote "to participate in a national celebration, a victory for democracy."

It had been brought forward by the death in July of 92-year-old president Beji Caid Essebsi, whose widow also passed away on Sunday morning.

Essebsi had been elected in the wake of the 2011 revolt that overthrew former dictator Zine El Abidine Ben Ali.

Publication of opinion polls has officially been banned since July, but one thing appeared sure -- many voters were undecided until just ahead of voting, due to the difficulty of reading a shifting political landscape.

Some hopefuls have tried to burnish anti-establishment credentials to distance themselves from a political elite discredited by personal quarrels.

Another independent candidate was Defense Minister Abdelkarim Zbidi, a technocrat running for the first time, although with backing from Essebsi's Nidaa Tounes party.

The long list of active runners was trimmed by the last-minute withdrawal of two candidates in favor of Zbidi: former political adviser Mohsen Marzouk and businessman Slim Riahi, although their names remained on the ballot paper.

But Karoui's detention, just 10 days ahead of the start of campaigning, has been the top story of the election.

A controversial businessman, Karoui built his appeal by using his Nessma television channel to launch charity campaigns, handing out food aid to some of the country's poorest.

But his detractors portray him as a would-be Silvio Berlusconi, the former Italian premier who they allege partly owns his channel.

On Friday, an appeal for the Tunisian mogul's release from prison ahead of the election was rejected, his party and lawyers said, two days after his defense team announced he was on a hunger strike.

The polarization risks derailing the electoral process, according to Michael Ayari, an analyst for the International Crisis Group.

Isabelle Werenfels, a researcher at the German Institute for International and Security Affairs, called the vote a democratic "test" because "it may require accepting the victory of a polarizing candidate" such as Karoui.

Distrust of the political elite has been deepened by an unemployment rate of 15% and a rise in the cost of living by close to a third since 2016.

Terrorist attacks have exacted a heavy toll on the key tourism sector.

Some stations were staying open until 6 p.m., while others were to close two hours earlier for security reasons.

Around 70,000 security forces were mobilized for the polls.