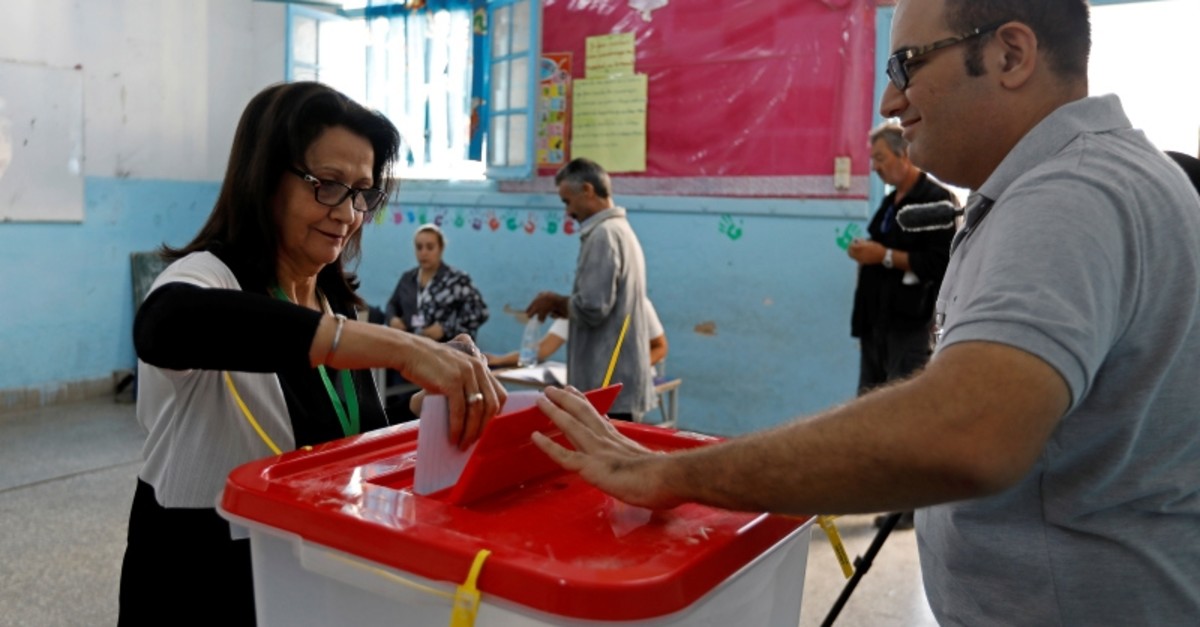 A woman casts her ballot at a polling station during parliamentary elections, in Tunis, Tunisia October 6, 2019. (Reuters Photo)
by Daily Sabah with Agencies Oct 06, 2019 11:16 am

Tunisia’s biggest political party, Ennahda, topped Sunday’s parliamentary elections with no faction able to win the majority, leading the country to be ruled by a coalition once again

Weeks after a presidential election that reshaped the country's post-Arab Spring political landscape, Tunisia's biggest political party, Ennahda, appeared to be heading for victory in Sunday's parliamentary elections, followed by the newly established Qalb Tounes, or Heart of Tunisia, led by jailed tycoon Nabil Karoui who will be in this week's presidential runoff.

An exit poll by Sigma Conseil broadcast by state television showed Ennahda with 17.5% of the vote and its main rival, the Heart of Tunisia party of detained media mogul Nabil Karoui with 15.6% of the vote.

The vote showed that as no one party has won the majority of the seats in the legislature to govern alone, the country will once again be ruled by a coalition. The parliament will have two months to agree on the formation of a new government to secure young democracy.

Two exit polls after the close of voting showed Ennahda in the lead with 40 seats out of 217, while Qalb Tounes was in second, with one pollster giving it 35 seats, and another 33. Ennahda leader Rashid Ghannouchi, who ran for the first time since Tunisia's 2011 Jasmine Revolution, won a seat in the parliament.

However, in the run-up to the legislative vote, Ennahda and Qalb Tounes officially ruled out forming an alliance, and with a plethora of parties and movements running, the stage could be set for complex and rowdy negotiations, or even a second poll. Even if the two leading parties could able to form a coalition, they would negotiate with other factions to secure the support of a minimum of 109 legislators, in order to secure a parliamentary majority.

Sunday's polls were seen as a test for the country's established political parties against the backdrop of challenges from nascent parties and independent political newcomers during the first round of presidential polls on Sept. 15. Last month, presidential contenders from the North African country's major political blocs, including Ennahda and the secular Nida Tounes Party, suffered a shock defeat. The sidelining of the ruling political class was rooted in frustration over a stagnant economy, high unemployment, failing public services and rising prices. In the first round of the presidential vote Karoui, held since August on money-laundering charges, came second behind Kais Saied, an independent law professor.

Following the death of President Beji Caid Essebsi in July, Tunisia could face a power vacuum and may lack a figure on whom each party would agree. The country has been experiencing economic and security problems. Unemployment has been increasing, while the presence of Daesh-affiliated groups constantly poses threats to the country.

Tunisia has been struggling to preserve its democratic course since the ouster of autocratic president after the revolution in 2011 that inspired an array of revolutions and conflicts across the Middle East and North Africa region. The country is a unique post-Arab Spring country in terms of being able to hold elections with little interference or influence from external actors compared to other Arab countries. The country's conservative and secular movements and parties have managed to stay away from direct external interventions.

While Libya, Syria and Yemen continue to suffer from civil wars with the participation of numerous local, regional and international actors, Egypt witnessed a more brutal regime in 2013 after incumbent President Abdel-Fattah el-Sissi ousted Mohammed Morsi, the country's first democratically elected president, who died over the summer during a court trial.

However, despite its fragility, Tunisia has managed to shift toward a democratic system of government.

At a polling station in central Tunis, voter Ribeh Hamdi, in her sixties, said she hoped the polls would bring "security and stability"