Expectations for clean politics bring victory for Saied in Tunisia 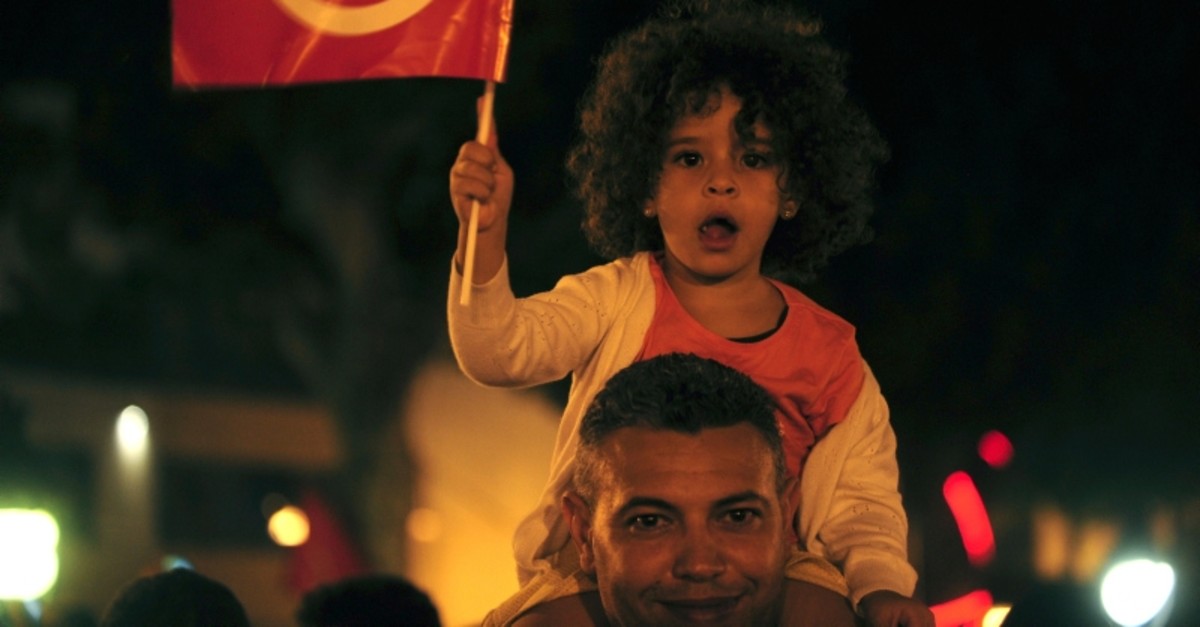 A crowd gathers on Tunis' main avenue, Sunday, Oct. 13, 2019 (AP Photo)
by Mustafa Kırıkçıoğlu Oct 18, 2019 8:34 pm
Tunisian independent candidate Kais Saied earned a landslide win in the second round of the presidential elections held on Oct. 13. Competing with businessman Nabil Karoui, who was charged with tax fraud and money laundering and released just four days before the presidential runoff vote, the law professor with no political affiliations secured his victory with collecting 70% of the votes against his rival.
Experts pointed to Saied’s clear background and the trust placed in him by the public to produce solutions for the country’s chronic problems as the most determinant factors in his election victory.
“We can summarize the election victory in four main factors: Saied’s humble character and his respected profession as a law professor, being a figure outside of Tunisia’s notorious political arena, Karoui’s corrupted record and mafia-like manner and high support from the youth as well as Ennahda,” Necati Anaz, an academic of Istanbul University, told Daily Sabah.
After no candidate got a majority in September’s first round election, a runoff held between Saied and Karoui, who had a close first round encounter and respectively earned 18.4% and 15.6% of the votes. Before the second round, the conservative Ennahda Party, former President Moncef Marzouki, former Prime Minister Hamadi Jebali, independent candidates, Lotfi Mrayhi and Safi Said declared their support for Saied.
None of the first round’s defeated candidates endorsed media mogul Karoui. Released from jail on Oct. 9, the businessman told reporters, "I wish to thank the judges who are honorable people and who set me free despite political pressure... They realized that I had suffered from injustice."
“Karoui’s high popularity stemming from the victimization perception due to his imprisonment decreased after his release. Also, Ennahda’s supportive statement in favor of Saied and disturbance among voters of secular the Nida Tounes party on Karoui were important factors for Saied’s clear victory,” Zeynep Karataş, a Middle East expert, told Daily Sabah.
Serious economic challenges
Tunisia is regarded as the only country which has had an uninterrupted democratic process among states simmered by Arab Spring revolutions in 2011. While a coup ousted the democratically elected president in Egypt, countries including Libya, Syria and Yemen have been engulfed in civil wars after demonstrations took place for change.
However, despite being hailed as the sole democratic success story of the Arab Spring, Tunisia substantially failed to address its economic problems including high unemployment and corruption, which stands as serious challenges ahead of Saied.
Karataş stressed that Karoui’s populist rhetoric targeting the lowest income group failed to gain traction due to the Tunisian people’s desire to continue the current democratic system. It also paved the way for a victory of a candidate without political affiliation, which, according to them, can maintain balance between institutions and carry out the war against corruption more successfully.
“However, the struggle against poverty is unlikely to bring results in the short term. Also, we understand that Tunisian people, who have been suffered due to International Monetary Fund agreements signed after the revolution, have a trust problem with politicians,” she added.
New president, new coalition government
Tunisians also went to the polls for the parliamentary elections earlier this month. While Ennahda topped the polls with about 18% of the vote, Karoui’s Qalb Tounes followed in second. No faction was able to win the majority, which means that the country will be ruled by a coalition once again for new term.
Anaz emphasized that the presidential seat will only have symbolic power and the prime minister will have actual executive powers. He added that handling economic problems hinges on the establishment of an effective and resolute coalition.
“President Saied should work in harmony with the new government to solve the recent problems. It may be the last chance given to political parties by the Tunisian people to solve the political instability, unemployment and corruption, the country’s thorniest issues,” he said.
Last Update: Dec 20, 2019 1:07 am
RELATED TOPICS