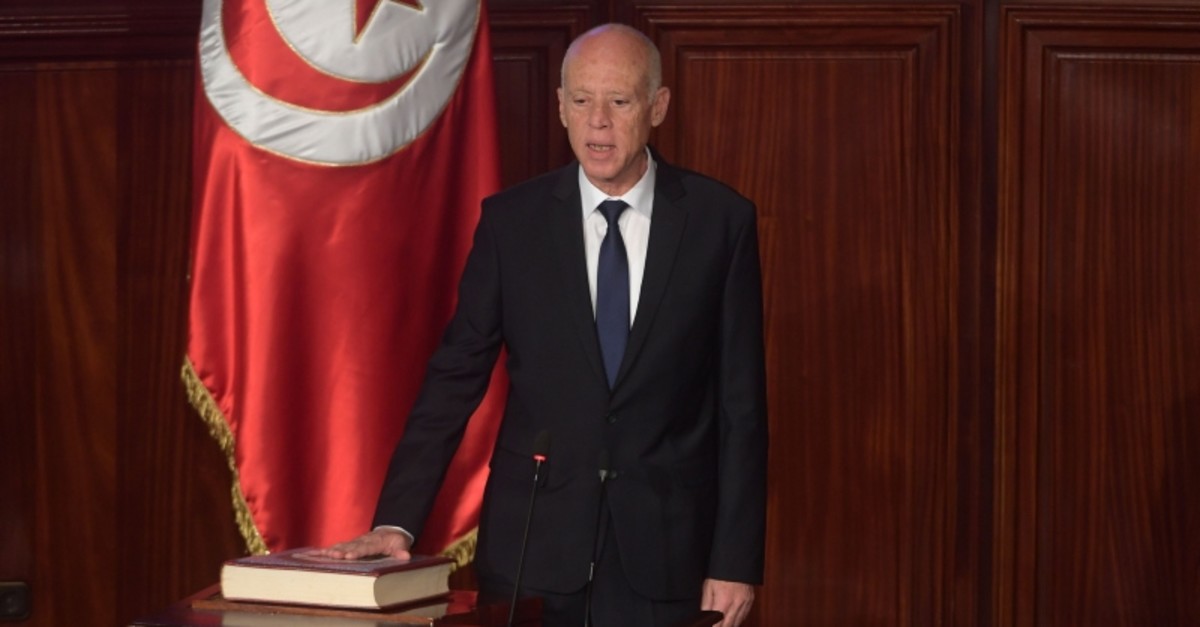 Tunisia's new President Kais Saied takes the oath of office in Tunis, Oct. 23, 2019. (AFP Photo)
by Compiled from Wire Services Oct 23, 2019 4:04 pm
Tunisia's newly elected president has been sworn in during a ceremony at the country's parliament.
Kais Saied delivered a message of "hope" for the country in his speech Wednesday at the Assembly of People's Representatives.
After sweeping 72.71% of the vote in this month's runoff, Saied has won a clear mandate to fight corruption and promote social justice, even though his role focuses on security and diplomacy.
A constitutional law professor whose rigid and austere demeanor earned him the nickname "Robocop," Saied has no real experience in foreign policy.
He vowed to fight corruption and protect freedoms, especially women's rights.
Saied said "there will be no tolerance in wasting any cent of the money of our people" as Tunisia struggles against joblessness and a flagging economy.
He pledged to tackle the roots of extremism, saying "we must stand united against terrorism."
While the security situation has significantly improved since a series of high-profile attacks on tourists in 2015, Tunisia has maintained a state of emergency for four years, with assaults against security forces persisting.
On June 27, a suicide attack killed two people in the heart of the capital Tunis, reviving the specter of violence.
Saied, a conservative, won the presidential election earlier this month. He received support from the Ennahdha party, which was victorious in Tunisia's recent parliamentary election.
He succeeds the late Beji Caid Essebsi, who died in office in July.
Last Update: Dec 20, 2019 1:12 am
RELATED TOPICS