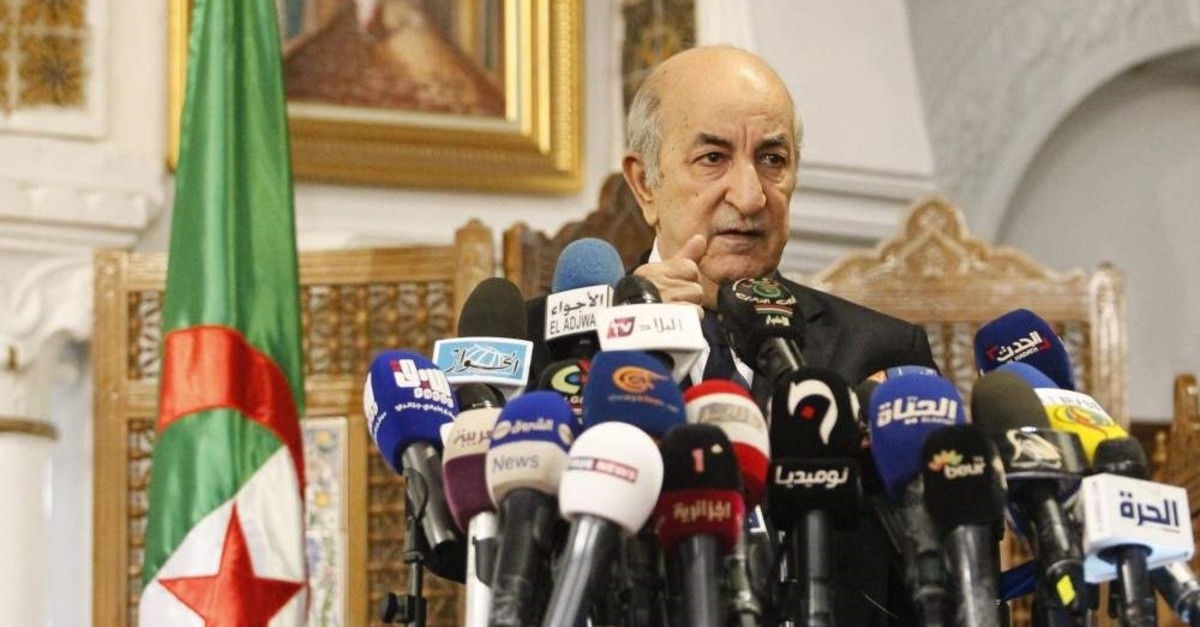 Abdelmadjid Tebboune, a candidate in Algeria's presidential election, speaks during a press conference in the capital Algiers on Nov. 9, 2019. (AFP Photo)
by Nov 09, 2019 8:45 pm
Five candidates, including two former prime ministers under deposed president Abdelaziz Bouteflika, have been selected to run in Algeria's December presidential poll, the country's consitutional council confirmed Saturday.
Twenty-three candidates had registered for the election which comes as Algeria has been mired in months of street protests demanding an overhaul of the entire political system.
Kamel Feniche – head of the constitutional council, which validates candidates for the election – said Saturday that only five of those candidates have been selected to run in the Dec. 12 polls, confirming a decision announced by the elections authority a week ago.
Protesters are opposed to any Bouteflika-era figures taking part in the election, fearing the elite will use the poll to choose his successor.
Among the five cleared to run, Bouteflika-era prime ministers Ali Benflis and Abdelmadjid Tebboune are considered the front-runners.
Benflis, 75, served as a premier under Bouteflika from 2000 to 2003 and ran as his main opponent in the 2004 and 2014 elections.
Tebboune, 73, was a senior civil servant and served as Bouteflika's communications minister when he came to power in 1999.
Among the other candidates is Azzedine Mihoubi, leader of the Democratic National Rally party (RND) which was the main ally of the former president's party.
Former Tourism Minister Abdelkader Bengrina, whose party backed Bouteflika, and Abdelaziz Belaid who belongs to a youth organization that supported the former president, are also in the race.
The election to find a successor to Bouteflika – who was forced to resign in April under pressure from the protest movement – was originally planned for July.
But the date was postponed due to a lack of viable candidates.
Last Update: Dec 20, 2019 1:33 am
RELATED TOPICS