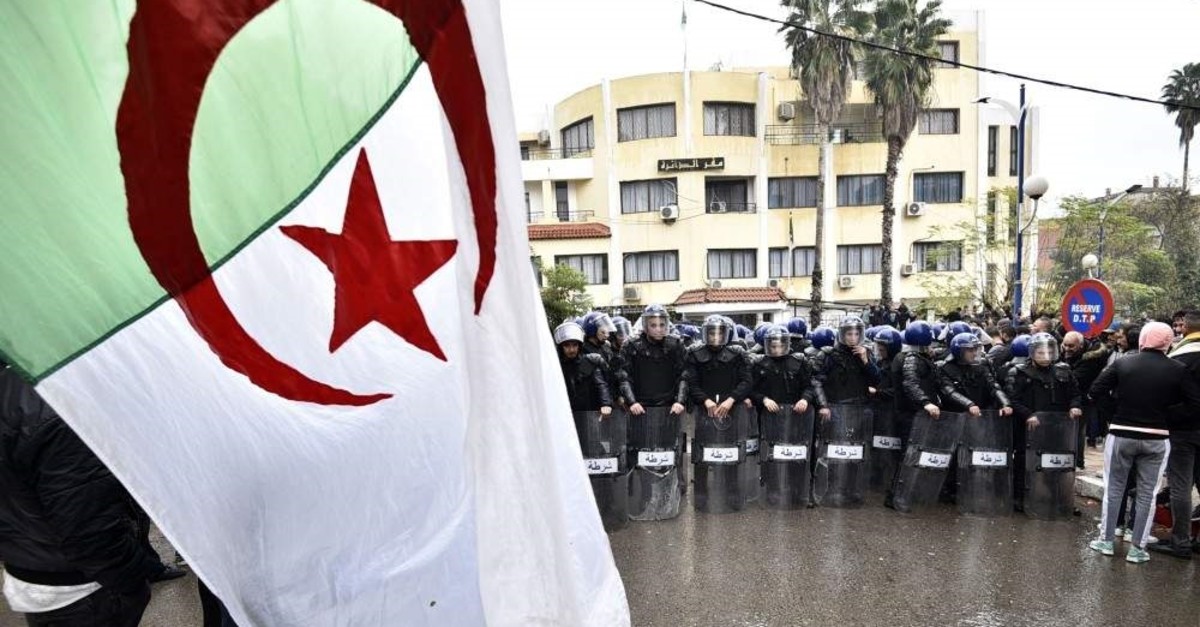 Amid the backdrop of mass protests against the military-dominated political system, Algerians are profoundly divided over choosing a new president in an election which is seen as a regime ploy to cling to power

After monthslong protests against the status-quo, Algerians will vote in a controversial presidential election Thursday.
With all five candidates having close links with the military-dominated establishment, leading many to see the polls as part of a strategy to avoid genuine change.

Algerian voters are profoundly divided over the election. Some think it is the only way to end the political crisis facing the nation since Feb. 22 while anti-vote protesters fear the poll will cement the positions of power politicians close to the ousted President Abdelaziz Bouteflika, despite their demands for the total dismantling of the military-dominated system that has ruled Algeria since independence in 1962.
The Hirak protest movement, which emerged this year from weekly demonstrations against the former French colony’s political establishment, denounced the presidential election, saying the poll cannot be considered free or fair while the ruling elite, including the military, stay in power.

Former President Bouteflika's February announcement that he would seek a fifth term in office sparked an unprecedented mass protest movement that by April forced him to resign. Since then, protesters continued their weekly rallies. The protests pose a major challenge to the military, which has pushed for Thursday’s election as the only way to resolve the deadlock between the authorities and the leaderless opposition movement.

As chief of Algeria's military for a record 15 years, Gen. Ahmed Gaid Salah has become the country's de facto leader after longtime president Bouteflika resigned in April. Many see the general as the guardian of the military-dominated system that has been in power ever since. He has acted as the key driving force behind Thursday's presidential election. Amid growing demand for a wholesale change of political leadership, anger has mounted over Gen. Gaid Salah, who was instrumental in Bouteflika's departure but then threw his support behind the interim president Abdelkader Bensalah, who is seen as part of the old regime.

The military so far has paid little attention to protesters’ demands to replace the constitution that served to legitimize Bouteflika's grip on power. Instead, the army has pushed for an election to pick a replacement for Bouteflika, saying it is the only route to resolving the political crisis. A previous poll set for July 4 was abandoned for lack of viable candidates and Bensalah's term technically ended five months ago. A caretaker government, appointed by Bouteflika two days before he quit, remains in post, led by his longtime ally Noureddine Bedoui.

The five candidates seeking to replace President Bouteflika in the Dec. 12 election have largely failed to captivate a disillusioned public. If no candidate wins more than 50% in the first round, the election goes to a second round in the ensuing weeks.
Instead of new faces, two of the candidates are former prime ministers and one is a loyalist of Algeria’s influential army chief. The candidates have tried to convince voters that taking part in the election is the only alternative to chaos, an allusion to the civil war that ravaged Algeria in the 1990s. But that argument falls flat among the overwhelmingly peaceful protesters with demonstrators calming each other down and ensuring that no one provokes the police. It’s a sharp contrast to the sometimes deadly protests and security crackdowns shaking Iraq, Lebanon and other countries in recent weeks.