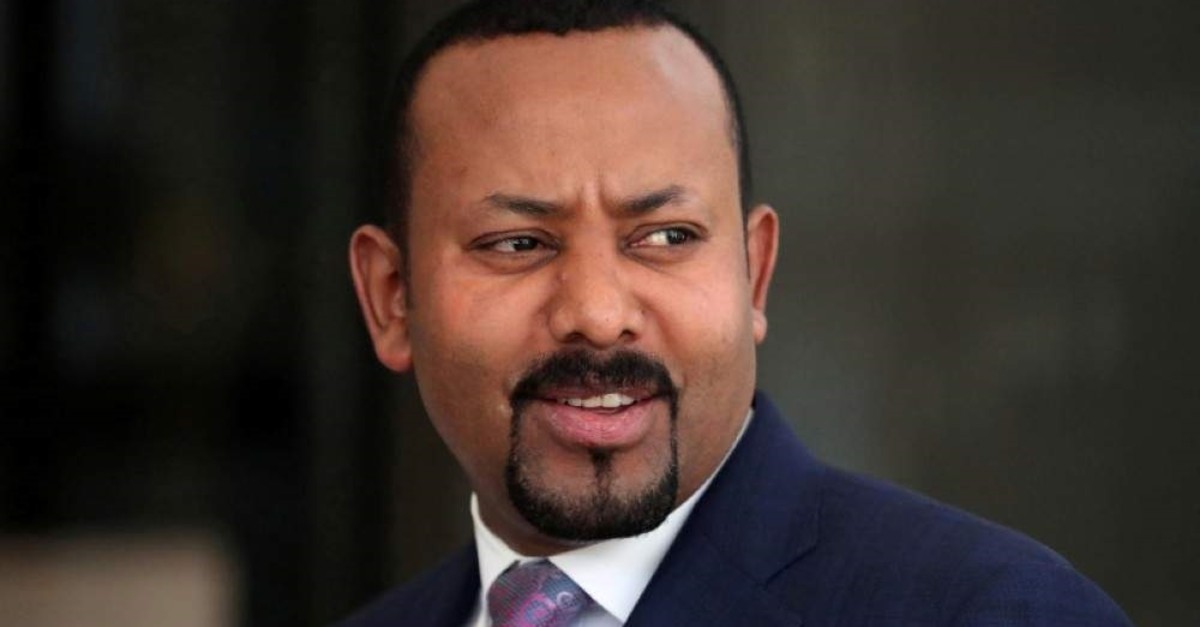 Ethiopia's Prime Minister Abiy Ahmed waits for the arrival of European Commission President Ursula von der Leyen before their meeting in Addis Ababa, Ethiopia, Dec. 7, 2019. (Reuters Photo)
by Compiled from Wire Services Dec 21, 2019 9:38 pm
Ethiopian Prime Minister Abiy Ahmed on Saturday condemned religious violence following attacks on multiple mosques in the Amhara region, the latest unrest targeting religious institutions.
State-affiliated Fana Broadcasting Corporate reported Saturday a number of mosques had been attacked and that "other properties were destroyed" in Mota town, more than 350 kilometers (217 miles) north of the capital, Addis Ababa.
"Attempts by extremists to breakdown our rich history of religious tolerance and coexistence have no place in the new prosperity focused Ethiopia," said Abiy, this year's Nobel Peace Prize laureate, in a statement posted to his Facebook and Twitter accounts.
"I condemn such acts of cowardice and call upon all peace loving Ethiopians to draw upon our deep knowledge of coexistence and our reservoir of respect."
Five people suspected of burning down four mosques in Ethiopia's Amhara region were arrested on Saturday, a regional spokesman said.
"Five people who are suspected of leading and organizing the attacks have now been arrested," Getnet Yirsaw, the Amhara state spokesman, said in a Facebook post.
Yirsaw also said that a church in the town of Motta, 377 km (234 miles) north of the capital Addis Ababa, had been targeted in an arson attack. It was unclear who was responsible for that attack.
The president of Amhara's regional Islamic council said the attack in Motta was unexpected and that businesses owned by Muslims had also been burnt and vandalized.
While ethnic violence has been a persistent problem under Abiy, recent unrest appears to have been at least partly motivated by religion.
During several days of violence in the Oromia region in October that killed more than 80 people, attacks on both mosques and Orthodox Christian churches were reported.
Yet analysts caution that conflicts that appear to be rooted in religion are often also shaped by disputes over land use, ethnicity and other issues.
Muslims make up about one-third of Ethiopia's population of 110 million, second only to Orthodox Christians at 40%, according to the last census which was conducted in 2007.
But Muslims are vastly outnumbered in Amhara, the country's second-most-populous region where Orthodox Christians make up more than 80% of the total.
The attacks on the mosques were condemned by the Orthodox Church and the Ethiopian Islamic Affairs Supreme Council, Fana reported.
Daniel Bekele, head of the Ethiopian Human Rights Commission, said in a statement that Amhara regional officials "should act promptly to investigate and bring perpetrators to justice."
RELATED TOPICS